Another nail in coffin of EU? Italians Reject Key Referendum

Another nail in coffin of EU? Italians Reject Key Referendum 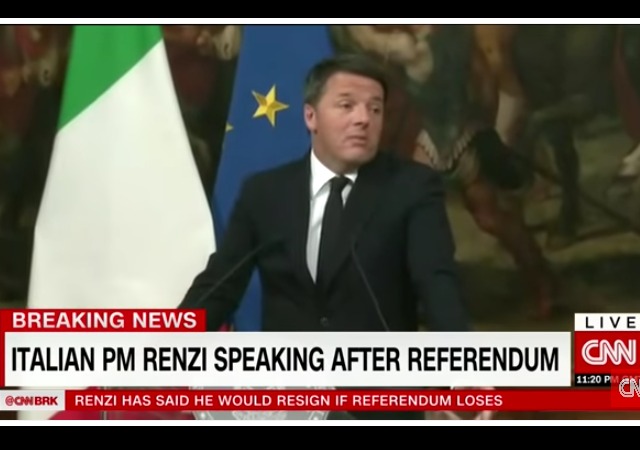 Italian Prime Minister Matteo Renzi has announced he will resign from his post after Italians rejected a referendum to amend the country’s 1948 constitution. Renzi said:

“Tomorrow the President of the Republic will have a meeting with me and I will hand in my resignation,” Renzi said. “I take on full responsibilities for defeat and so I say I lost, not you,” he told supporters.

The defeat of the referendum was resounding, with nearly 60% of voters saying “no.”

Renzi pushed the referendum “to reduce the power of the upper house of the Italian Parliament, the Senato, by cutting its numbers from 315 to 100 — making it more of a consultative assembly.”

He thought the referendum would “help revive the nation’s lethargic economy,” but some saw it as a way to bring more power to the central government. The New York Times listed the key points in the referendum:

Italians also used the vote to “register discontent with the current government.” The vote adds to the nationalism that has spread through Europe over the past few years. The 5 Star Movement pushed the No Campaign, claiming Italy needs “more radical change“:

The party has called for a nonbinding referendum on Italy’s euro membership. It also wants to abandon EU budget strictures and has said it might favor printing a parallel currency.

Public-opinion surveys indicate that roughly 30% of Italians would back 5 Star candidates if parliamentary elections were held now. That puts it neck-and-neck with Mr. Renzi’s Democratic Party and means it will have an influential voice and could even end up in power—an outcome that could ultimately threaten the integrity of the eurozone and its common currency.

Italian President Sergio Mattarella will decide the next course of action:

He could piece together a government out of the current Parliament or call for a general election in which the Five Star Movement party is expected to make great gains.

Weirdly enough, former entertainer Grillo founded the movement. He sounds like the Italian Donald Trump! CNN reports that he found his way to fame “on Italian TV in the 1970s and 1980s and capitalized on his show-business bravado to promote an anti-establishment movement spanning both the left and right of politics.”

If Grillo gains that power, experts believe he will scrap the Euro, bring back Italy’s now defunct lira currency, and attempt to break away from the European Union.

The new government would be charged with rewriting the country’s electoral law and passing the annual budget.

Mr. Padoan, who has held top posts at the World Bank and the European Central Bank, could soothe market jitters. Mr. Grasso is a well-respected former anti-mafia magistrate who had a distinguished career fighting organized crime.

The possibility of a no vote sent fears through the market, much like Brexit and Donald Trump. But once again those fears did not last long as the markets have stabilized on Monday morning:

The euro was hit after Mr Renzi announced his intention to resign. At one stage the euro hit $1.0505, its lowest level against the US currency since March 2015.

Shares in Italian banks opened lower before recovering ground.
The troubled Monte dei Paschi was down by more than 5% in the first few minutes of trade, but then rebounded and have risen by 1.2%. Shares in Unicredit fell sharply before recovering some ground. Intesa also fell sharply, but by late morning was trading flat.

Any writer or commenter worth a Damn would spend at least a month in Tuscany in research.