The world mourns the loss of a beloved actress and writer. 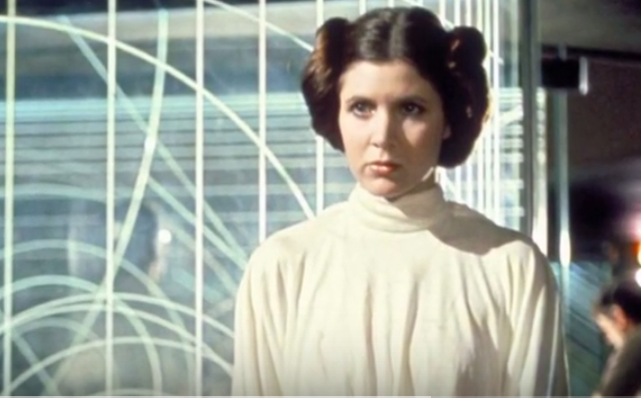 I have a sad update to the post on Rogue One that published yesterday.

Carrie Fisher, our American Princess of Science Fiction, passed away this morning after suffering a heart attack on Friday.

Carrie Fisher, who rose to fame as Princess Leia in the “Star Wars” films and later endured drug addiction before going on to tell her story as a best-selling author, died on Tuesday aged 60, her family said.

…The daughter of actor Debbie Reynolds and the late singer Eddie Fisher had been returning from England where she was shooting the third season of the British sitcom “Catastrophe.”

“Thank you to everyone who has embraced the gifts and talents of my beloved and amazing daughter,” Reynolds said on Facebook. “I am grateful for your thoughts and prayers that are now guiding her to her next stop.”

The haunting Princess Leia’s Theme by John Williams musically captured the complexity of her character.

Fisher’s gifted portrayal of Leia spanned decades, morphing from a fearless spy for the Rebellion in A New Hope, a gold-clad sex symbol in The Return of the Jedi, and a powerful general in The Force Awakens. Thousands of American girls, including myself, have doffed “Princess Leia Buns” for Halloween, which is a tribute to Fisher’s portrayal of a character that could have been forgotten if it was played without the grace and sense of humor she infused into the part.

“I remember the first time it was weird to me was when someone wanted to thank me because they’d become a lawyer because of me,” Fisher said. “The main thing they said is that they identified with me. I felt like that was somebody that could be heroic without being a superhero and be relatable.”

But Princess Leia was only one of many roles. During the 1980s, Fisher appeared in a string of hits, including The Blues Brothers, Hannah and Her Sisters, and When Harry Met Sally.

Over time, she became comfortable speaking publicly about her mental state, an inspiration to many, less famous fans struggling with the same condition, even if the medication sometimes made her slur her words a bit. In recent years, her therapy dog, Gary, a ubiquitous presence wherever she went, became a star in his own right.

Her struggles inspired her to try a second and highly successful career as a writer. Perhaps her most famous book is Postcards from the Edge, in which a substance-addicted actress tries to remain optimistic as she is forced to move back in with her mother to avoid unemployment. Other works include The Princess Diarist (her musings during the filming of the science fiction hits) and Wishful Drinking (her memoir).

In her book “Wishful Drinking,” Fisher wrote the beginning of her ideal obituary. The remark came as the punchline to an anecdote about “Star Wars” director George Lucas telling Fisher that Princess Leia couldn’t wear a bra in space — because, by his logic, it would kill the character.

“I think that this would make for a fantastic obituary,” she wrote. “I tell my younger friends that no matter how I go, I want it reported that I drowned in moonlight, strangled by my own bra.”

This tweet perhaps expresses the sentiment of many today.

“I felt a great disturbance in the Force, as if millions of voices suddenly cried out in terror & were suddenly silenced.” RIP Carrie Fisher

Carrie Fisher is survived by her brother, Todd Fisher, and her mother and daughter….and millions of fans who will continue to be inspired by her work.

The Force Wasn’t With Her.

Nonsense. She was struck down, and she has become more powerful than you can possibly imagine.

RIP. Beyond acting she was a good voice against destructive lifestyles. And she was a huge advocate for better treatment for bipolar disorder.

As with many talented people, she was weak when it came to drug use and she was mentally challenged – she advocated for shock treatment. She claimed that President-elect Donald J. Trump was a cokehead – without evidence.
May she rest in peace, but let’s not pretend she was something she was not.

All I remember about her recently was a particularly silly statement about “teabaggers” a few years ago. It made her sound a bit brain-damaged.

You wouldn’t want her as your upstairs neighbor, but she was ‘beloved.’

Never understood the deification of people who pretend to be someone else. Or sports figures. Or any public persona. While there are some real giants in many good ways, you can never tell when something dark will come out of their closet.

Growing up my family members have always been my role model. They stood the test of time as have my long time friends.