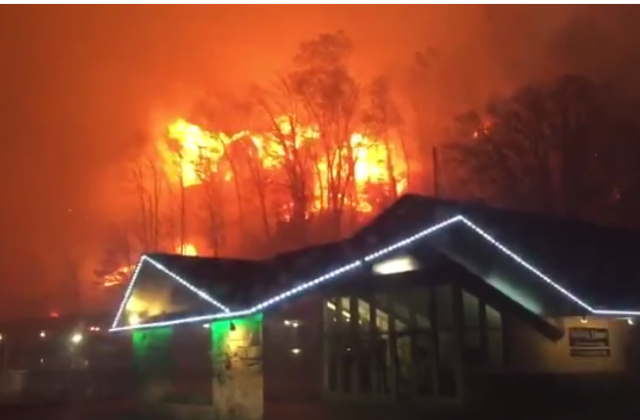 Tennessee emergency response officials are reporting that a wildfire has set 30 structures ablaze in Gatlinburg, including a 16-story hotel, and is at the edge of the famed Dollywood theme park.

The Tennessee Emergency Management Agency says 30 structures are on fire, including a 16-story hotel on Regan Drive and the Driftwood Apartments in Gatlinburg. The wildfire is also at the edge of the Dollywood property.

Mandatory evacuations are in place for Mynatt Park, Park Vista and Ski Mountain in Gatlinburg. Evacuations have also been ordered for the north end of Pigeon Forge.

There are no reports of fatalities from the fires, according to TEMA. There is one report of an evacuee suffering a burn injury.

There are reports of downed power lines and trees, TEMA said.

The Tennessee National Guard is deploying personnel to Sevier County to help with clearing debris. The Tennessee Highway Patrol and the Tennessee Department of Transportation are assisting with evacuations and traffic control in the area.

The weather has played a significant role in the rapid spread of the flames, which have so far spread over 500 acres.

“It’s very dangerous weather conditions,” Dana Soehn with the National Park Service told WATE. “We’ve had trees coming down, limbs coming down and the fire is continuing to grow.”

“Due to continued erratic winds, the fires are very unpredictable and more fire growth is expected.”

The wildfire is one of two that actually began burning last week, but expanded rapidly with the winds.

At least two wildfires burning in Great Smoky Mountains National Park are causing problems in the park and in nearby Gatlinburg, Tennessee. The Chimney 2 Fire has been burning since November 23 and was reported to be 10 acres Sunday evening, but overnight 40 mph winds gusting to 74 mph caused the fire to spread more quickly 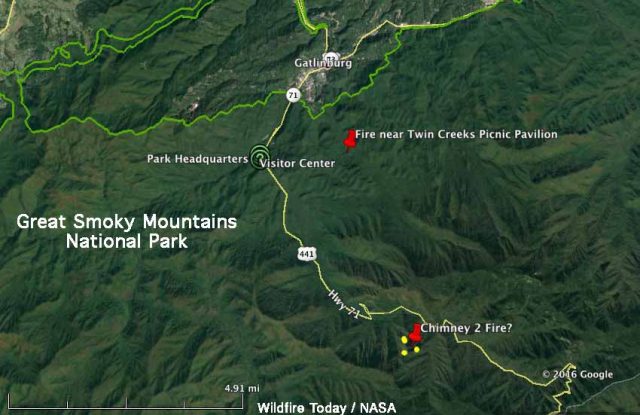 Firefighters are now hoping weather will help the battle the blaze.

Rain moved through the area Monday night, leaving many to hope for a watery respite to calm the flames. Despite this, the fires raged on. Sevier County EMA said an enhanced fire danger was in effect Monday from 9:57 a.m. until 8 p.m. EST.

Hopefully, the firefighters will contain the fires soon, and prevent further devastation of one of the loveliest areas in the nation.

When Trump supporters voted to “burn it all down,” I bet they didn’t think it would start with Tennessee.

Saw this video yesterday of a couple guys barely getting out. Language warning, although I think I’d have been a bit more raunchy.

I believe that was in the Chalet Village. I have to wonder why they didn’t get some kind of notification.

I guess my line of thinking is different, but, I care a lot more about good solid American people losing their homes and businesses than I care about a theme park. YMMV

If Miss Dolly were signing your paycheck you might be singing a different tune.

Three people dead. 250 buildings burned.
This is serious folks.
It’s not about theme parks.
It’s about a beautiful part of the country burning and people’s lives and livelihoods being destroyed.

This fire is horrendous. We’re not very far away from it. Tennesseans are not prepared for this kind of catastrophe at all. They’re trying to run this with about 1/10th of the manpower, expertise and equipment that they need. This fire is going to go on and on until they get more equipment and some professionals on scene. These amateurs, good-hearted and try as they might, need help fast. Otherwise, they should pray for rain. An 8 hour steady downpour would do it. The weather report calls for light rain late tonight and a thunderstorm tomorrow. Right now, there’s a high wind warning, which is the last thing we need. This is looking pretty bad. 3 dead thus far.