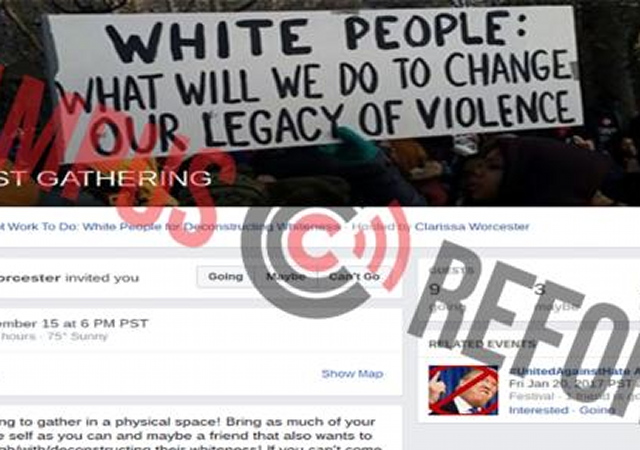 Liberals have gotten to the point where they’re even calling themselves racists.

White students at Pomona College have launched a new student group dedicated to “owning our racism” and “deconstructing our whiteness.”

The organization—which calls itself “We’ve Got Work To Do: White People for Deconstructing Whiteness”—held its inaugural gathering Tuesday evening on Pomona’s campus, though students from all five schools in the Claremont College consortium are welcome to join.

“This is a group for White people at the 5C’s to work on owning our racism, deconstructing our Whiteness, and to engage in movement & action toward dismantling White Supremacy,” the organization explains on its Facebook page.

“Recognizing that White identity is a self-fashioned, hierarchical fantasy, Whites should attempt to dismantle Whiteness as it currently exists,” the description adds, drawing from a selection in the book Critical Race Theory: The Cutting Edge. “Whites should renounce their privileged racial character, though not simply out of guilt or any sense of self-deprecation. Rather, they should dismantle the edifice of Whiteness because this mythological construct stands at the vortex of racial inequality in America.”

I’m really sick and tired of these fools.

Actually, those kiddies are funnier than any current professional comedian I can thin of.

Remind me … have I mentioned before that I have absolutely zero interest in “uniting” or “coming together” with any society which includes these fools?