Mika, Joe Overcome With Mock Emotion at Outpouring of Dem Praise for Comey 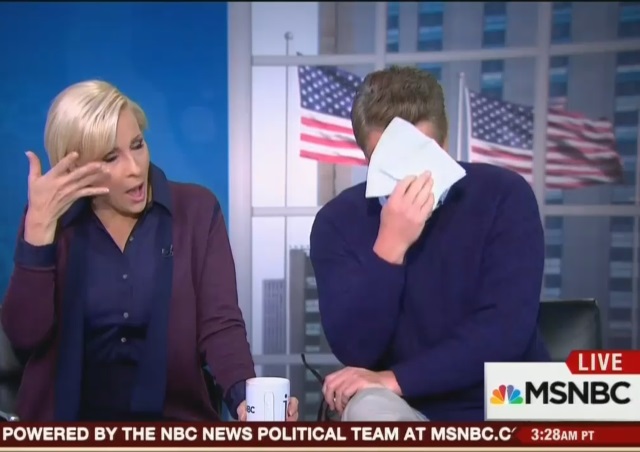 Readers have likely already seen montages of major Dems lavishly praising FBI Director James Comey after he announced in July that he wouldn’t be recommending the indictment of Hillary Clinton. Those same Dems turned on Comey with a vengeance when this past Friday he announced that the FBI was looking into newly-discovered emails that could be pertinent to its investigation.

Morning Joe took the flaying of Dem hypocrisy to another level today, setting its montage to Barbra Streisand’s “The Way We Were.” And when the camera cut back to the set, there were Mika Brzezinski and Joe Scarborough, overcome by mock emotion, wiping their eyes. The pair, along with Willie Geist, proceeded to sarcastically scald the way the praise expressed by the Dems was “unconditional,” how “it is a love that a mother has for a child,” etc.

Singled out for particular mockery was congressman Elijah Cummings, his voice filled with emotion, telling Comey at a hearing “I don’t know whether your family is watching this, but I hope that they are as proud of you as I am.”

TIM KAINE: What I do know is this, that there was an extensive, as you know, Brett, investigation by the FBI under the direction of a wonderful, and tough, career public servant, Jim Comey. He’s somebody with the highest standards of integrity.

BARACK OBAMA: I think Director Comey could not have been more exhaustive.

HILLARY CLINTON: I am grateful for the professionalism of the FBI and the Department of Justice.

NANCY PELOSI: This is a great man. We are very privileged in our country to have him be the Director of the FBI.

HARRY REID: No one can question the integrity, the competence.

ELIJAH CUMMINGS: I don’t know whether your family is watching this, but I hope that they are as proud of you as I am.

WILLIE GEIST: You know, that kind of love is unconditional —

JOE: It was unconditional —

WILLIE: — no matter what happens, I’m with you.

JOE: It is the love that a mother has for a child. It is a love that endureth forever. That is actually more moving than when Redford and Streisand see each other at the end, and she just [gestures.]

MIKE BARNICLE: And that was moving.

JOE: And I cried there! But this? And Harry Reid, oh, my God. You couldn’t write that in a movie.

MIKA BRZEZINSKI: Harry, I didn’t know you had such deep feelings.

JOE: That’s too painful to remember.

BARNICLE: And it doesn’t change! It’s locked in.

JOE: You know what? They simply choose to forget.

Remember that in “The Way We Were”, the two main ( main )characters were active on other sides of the political fence.

OK, good for them. Instead of making me gag they actually roused a laugh.

One is by Michael S. Schmidt and Matt Apuzzo, titled “FBI begins review of Clinton Adviser’s Emails” which is covering the story that the FBI has re-opened the case against Hillary,

The other is by David Barstow and Mike McIntire, titled “Trump Used Dubious Methods to Avoid Taxes”, which discloses that Trump sought and obtained an opinion by counsel that contained the usual disclaimers. The article further discloses that the reporters do not know if the IRS disagreed on that point.

So, the New York Times has let out two articles with misleading titles for regional consumption, one softening the description of a major story, and the other a complete non-story.

This begs the question of who actually wrote those stories, and for what motivation. My speculation is that the Trump article was in the can, and pulled up just for the purpose of “balancing” an unfavorable Hillary story.

Anybody who believes that the IRS has audited Trump’s taxes and missed some illegal deductions has never been audited by the IRS.

The IRS is the only branch of government with its own courts, in which the IRS brings its cases, and which also (by amazing coincidence) has a 100% conviction rate.

If he owes them a dime, he’s already written the check.

Hate to contradict you, but virtually everything you said is simply mistaken.

Several agencies have their own administrative law “courts”, including immigration.

The IRS administrative law judges do find against the IRS rather often.

Lower level IRS employees are frequently overruled by higher level ones, who, in my experience, are not idiots or unreasonable. The trick is getting to them, which most ordinary tax-payers never achieve.

Yep. One of my favorite professors in law school, a man named Alvin Storrs (God rest his soul), was a partner in a boutique tax representation firm in Detroit that represented a lot of the “Motown” sound artists before the IRS. He had a couple of rules:

1.) Don’t settle for what you get from the IRS line investigators. Get to a supervisory-level employee. They’re better informed on the actual state of the Code and the Regulations, and more likely to have authority to negotiate a reasonable resolution. If you STILL don’t like the answer, go up. You tend to get better results the higher you get, as long as YOUR client is being reasonable.

3.) Appearances are important. You CAN convince the IRS that they shouldn’t seize your clients assets because they require “the trappings of wealth” to be able to show to THEIR clients that they are successful, and keep business rolling in the door.

4.) Dont’ be afraid to be aggressive in your tax policy stance. The IRS has MUCH more to lose by a decision going against them if you actually GET to a Federal Court decision, because then it becomes applicable to EVERYBODY. If the IRS thinks there’s a moderate or better chance that they could lose on something with general applicability, they’re GOING to make your client a reasonable offer to settle rather than have that “losing” interpretation become precedent and de facto law that now all OTHER taxpayers in the same situation can point to to justify THEIR aggressive tax stances.