‘Vote for the Crook, It’s Important!’

‘Vote for the Crook, It’s Important!’ 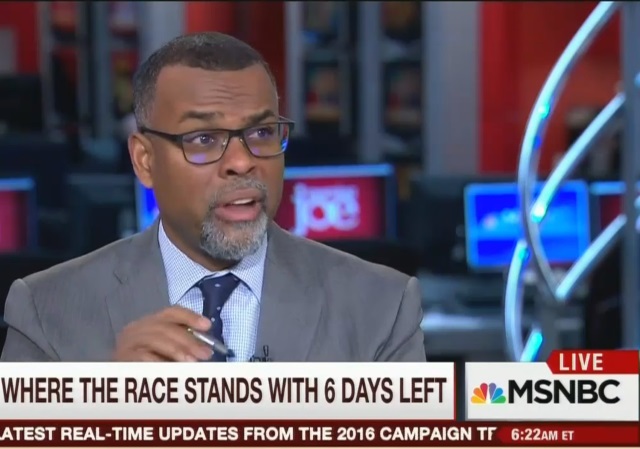 Readers will remember the runoff race for governor of Louisiana in 1991 in which the notoriously corrupt Edwin Edwards faced off against ex-Klansman David Duke. The race spawned the greatest bumper sticker in American political history: “Vote for the Crook. It’s Important.”

Now it looks like Hillary might need that same kind of sentiment if she’s going to win. Take two telling anecdotes from today’s Morning Joe. First, Eddie Glaude Jr., chair of Princeton’s African-American studies department, told of someone in an airport telling him “if there’s a crook who is going to go into the cockpit, who knows how to fly the plane, and then there’s an idiot who doesn’t know how to fly the plane, I’m going to vote for the crook.” Later, New York Times reporter Yamiche Alcindor said she had spoken to Hillary supporters who “worry about whether she’s going to end up indicted [but] would rather have Tim Kaine as president if it comes to that than Donald Trump.”

If this is the kind of support Hillary is relying on, she is in deep trouble.

Note: Some will surely vote for Hillary despite believing she’s a “crook” and worrying about her possible indictment and removal from office. But I believe many more Americans will think along the lines I described in this morning’s Quick Hit: “the American people now realize that if Hillary is elected, the country will be subjected to unprecedented turmoil in the form of investigations and possible prosecutions . . . A vote for Trump and against Hillary is a vote to put the decades-long drama of the Clintons behind us once and for all.”

EDDIE GLAUDE JR.: I was in the airport coming from LSU, I gave a talk down in Baton Rouge, and some guy—and by the way they love the show—some guy stops. He’s talking to me about politics. And he says, you know, if there’s a crook who is going to go into the cockpit, who knows how to fly the plane, and then there’s an idiot who doesn’t know how to fly the plane, I’m going to vote for the crook.

YAMICHE ALCINDOR: I don’t see people who are leaving [Hillary]. Even some supporters that I’ve talked who are worried about whether or not she’s going to somehow end up indicted. They told me, hey, I would rather have Tim Kaine as president, if it comes to that, than Donald Trump.

Funny how they don’t apply the logic to Mike Pence as though Trump has no backup.

I mean, if you were to impeach Trump because he is “bad” and remove him, you would get Mike Pence who is far more qualified than Tim Kaine.

Yeah, well he’s doing three rallies per day in different cities and doesn’t need help to get up stairs or a guy with a syringe following him around in case he passes out.

The history of mankind has included a consistently growing life expectancy, due to better diet and better medical practice, so as four-year presidential cycles come and go, the upper window of what constitutes ‘old’ or ‘too old’ increases, of course. I don’t see age in and of itself as a concern with Trump or Hillary. Actual health is the consideration.

My paternal grandfather was 75 years old, 5’6″ and 140 lbs, when I aged out of the Police Athletic League and Amateur Athletic Union youth boxing programs where I’d participated since age 6. I got a little teenaged cocky with him and made the mistake of initiating a round of slap boxing with him, thinking to myself I’d take it easy on him, maybe even let him win if necessary. Within 30 seconds he slapped me silly and I couldn’t do a thing about it, despite my 8 inch height advantage at the time, plus a damn fine record as an amateur boxer. Embarrassed the sh*t out of me, but he did make my father laugh harder than I’d seen him for years. Then I remembered that Grampa had fought as a bare knuckles club and street fighter in Detroit to make money when he emigrated from Scotland during the Great Depression.

Some folks aren’t fit for the presidency, but it’s going to be because of ill health, not old age, which are no longer necessarily synonymous.

Begged for a rematch often, but only got laughing derision and goodnatured ribbing.

“Some folks aren’t fit for the presidency, but it’s going to be because of ill health…”

Shrillary in a nutshell.

Very likely. Something isn’t right with her health.

“The truth is, I cut taxes as mayor of Richmond. I’ll enforce the death penalty as governor, and I’m against same-sex marriage,” Mr. Kaine said in one of his ads. “I’m conservative on personal responsibility, character, family and the sanctity of life. These are my values, and that’s what I believe.”

And he sold out in a minute.

Or maybe he went to a “toxic masculinity” seminar and rid himself of his balls. That would certainly explain the huge turnout to his rallies.

Did you hear about his possible VP moto reboot, by the way?

I’m with Her ‘a’ Kaine Hillary

Everybody hopes it will go out to sea and not head to DC where it will destroy the place.

So they finally started to admit that their candidate is indeed a crook. Get ready for the avalanche.

Hillary Clinton is the 1st person EVER to receive and email from an Nigerian Prince – and then ACTUALLY receive $20 million dollars!

So, there argument is yes, Hillary is a crook, but she’s our crook so vote for her… Trump landslide on the horizon.

Nice work! Heard the footsteps of the grammar police on your tail? 😉

Guess he’s Ted Cruz’s “crony capitalist thug” as well, given that Ted will now be campaigning with the Trump campaign.

I think we may be down to less than 10 nevertrumpers now.

And I suspect 90% of those will vote Trump, just not admit it. And that will leave one, a lonely place for you Rags.

There is always the next election cycle .. when Kayne West runs.

I see him more as solid vice-presidential material, with Kim Kardashian heading the ticket 😉

I am still waiting for the other Wikileaks shoe to drop.

Apparently the other shoe did dro with project veritas.
Something about the Clinton campaign believing that “”blacks are f****d in the head”, But I haven’ts een the cideo only skimmed some headlines now.

More to come, stay tuned.
Prog desperation. Or as the former pastor of the anti American president would say, “The chickens are coming home to roost”.

She is our crook is almost as good as “He is a rapist, and he abuses women, but he is our rapist”

It isn’t just Hillary, it’s what else we get, with Hillary-

All of those people associated with the Clinton Foundation, all of the FOBs who looted the reconstructions funds for Haiti, and the foreign governments, all with markers they expect to use.

The Clintons are trying to turn us into Mexico. We can do better than that.

New Woodward and Bernstein book.
“All the Clinton’s Crooks”

If I’m voting for Trump because Mike Pence is one heartbeat away from being Presidency, I guess they can vote for Hillary as Tim Kaine is one guilty charge away. Flawed logic on both sides, such is the state of America these days.

Not really. In spite of the efforts by some to create an equivalency between trump and crooked Hillary, it doesn’t exist. You might not like Trump, but he is a far cry from the Clinton crime syndicate.

He’s an endorser and contributor to the Clinton crime syndicate. He LUUUUUUURRRRVED them just prior to his latest “campaign conversion”.

They have medication for those voices in your head. Works for some but not for others. Probably worth a try.

We’ve had Andreas Lubitz in the cockpit for nearly the last eight years.

I haven’t read the article yet and am just going by the subtitle.

There are boatloads of presuppositions in a statement like that.

I honestly can’t see how the transition to a Hillary Clinton presidency plays out.

Does the FBI investigation end when she asks Comey for his resignation?

Remember that under President Bill Clinton, Democrats torpedoed attempts to renew the Independent Prosecutor law (Ethics in Government Act — does everything in Washington have to have an Orwellian name?) — so there won’t be a special prosecutor unless Hillary Clinton appoints one.

So, does the Judiciary committee in the House open up an impeachment investigation even before she is inaugurated, just to be able to secure the FBI’s evidence before it gets destroyed?

Does Obama pardon her, “for the good of the nation”?

Does the House double down on impeachment?

Or do we get a weary, “At this point, what difference does it make?” as equality under the law quietly dies?

No the investigation doesn’t end.

She can ask for it, but he doesn’t have to give it.

What does she do then impeachment?

I also wonder if a State’s AG can indict her.

Could get messy. THank God Trump is going to win.

The president can fire the FBI director. See Clinton, W.J.

A pardon won’t protect her from impeachment.

Pleased to mention that James Taranto’s highly-recommended WSJ.com column, Best of the Web Today, has quoted at some length from this item: http://on.wsj.com/2fbR2zr

I can’t see America electing a woman who is so often a target of sniper fire. Democrats, Indies, if you love Hillary, the best thing you could do for her safety is stay home on election day so she’ll lose and the snipers will leave the poor woman alone.

Henry earns the internets medal of the hour.

Saving one life at a time.

Why does he assume that Hillary can fly the plane. She’s put in nose down in the ground every time she’s tried. Killed a bunch of people too.

“Ladies and gentlemen, this is your captain speaking. My co-pilot will be passing among you shortly collecting for our safe flight. We accept cash, credit cards, and jewelry when properly inspected for value. In the event we do not collect enough money, there *may* be a minor loss of cabin pressure, in which case people who donate sufficiently will be permitted to rent an oxygen mask, for a small additional fee. Also, in the event of a water landing, you also will want to have purchased a life vest for yet another fee, or even one without holes in it for slightly more. Also, in the event the aircraft runs out of fuel due to the previous pilot not filling up the tank, I’m out of here with my own parachute, so if you want to purchase one of your own, they’ll be up for bids during the flight, starting at a minimum of one million dollars each.”

And thank you for flying Con-Air.