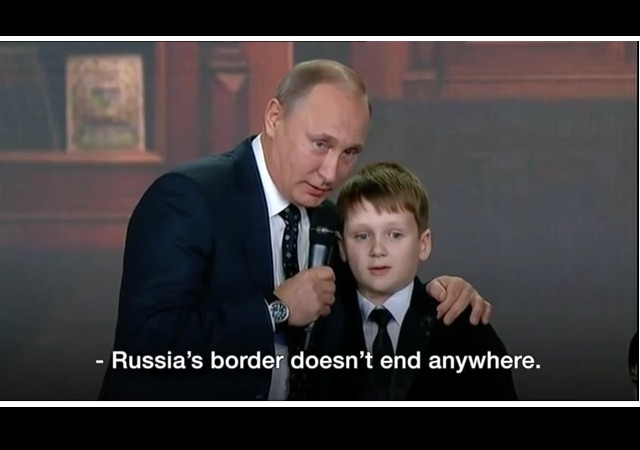 On stage Putin questioned Miroslav Oskirko, a nine-year-old prodigy who said he knew the borders of every country in the world.

Hugging the boy by the shoulder, Putin corrected him: ‘Russia’s borders don’t end anywhere,’ before adding: ‘That is a joke.’
His remarks prompted laughter in the audience, which included Defence Minister Sergei Shoigu, who heads the geographical society.
‘An update from Putin: Russia’s borders don’t end anywhere!’ wrote Interfax news agency on Twitter.

‘Are we talking about culture here or the S-400?’ Twitter user Dmitry Kasatkin wrote, referring to Russia’s most sophisticated air defence system, which has been deployed to Syria.

Russia seized Crimea from Ukraine in March 2014 by sending in thousands of special forces to take control of Ukrainian bases and holding a hastily organised referendum that was rejected by the international community.

The Kremlin has been waging a war with Ukraine since March 2014 when the Ukrainian parliament ousted his buddy President Viktor Yanukovych and instilled a pro-Western government. Putin responded by annexing Crimea. He and other Russian officials have made threats against old Soviet republics.