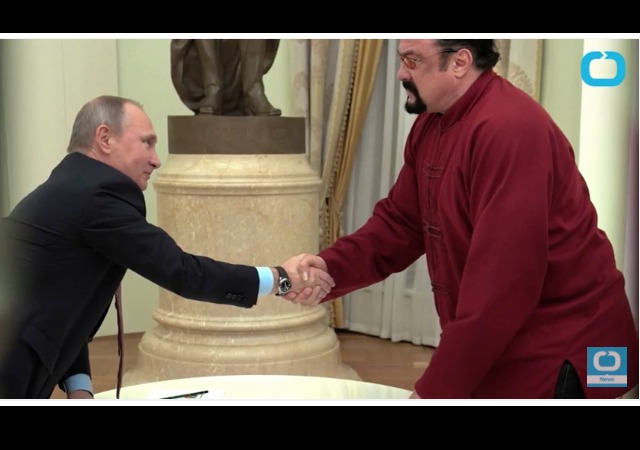 Russian President Vladimir Putin presented a Russian passport to U.S. actor Steven Seagal on Friday and said he hoped it would serve as a symbol of how the fractious ties between Moscow and Washington are starting to improve.

At a Kremlin ceremony where Seagal signed his new passport in front of Putin, the Russian leader said: “I want to congratulate you and express the hope that this is another, albeit small, gesture and it might be a sign of the gradual normalization of relations between our countries.”

When Putin then asked how he was doing, the actor replied that “everything is good. We will talk later. For now just honored to be here.”

Putin, a fan of the kind of martial arts that Seagal often practices in his Hollywood action movies, signed an order at the start of this month to grant Russian citizenship to Seagal.

At the time, a Kremlin spokesman cited Seagal’s “warm feelings towards Russia” and his celebrity as the reasons for granting the gesture.

For more than a decade Seagal, who according to his own website is 64, has been a regular visitor to Russia. His movies, including such titles as “Under Siege” and “Sniper: Special Ops,” are popular with Russian audiences.

It’s probably nothing to do with crummy movies.

Certified weird guy Seagal is, despite being weird, a bona-fide Aikido sensei, and for years has been conducting very well-attended demos and classes at Aikido dojos in Russia.

And now for a bit of weekend heresy; personally, I think Steve Seagal movies are better than Chuck Norris movies. Yes, I know, strong words there, but Seagal’s Aikido is surprisingly graceful, particularly given that Seagal himself is the size of a house, and one would expect him to be a clumsy ox. Of course he’s a lot clumsier now than he used to be … perhaps his dissolute life of carousing and churning out really awful scripts is finally catching up to him.