VIDEO: Oklahoma U. Snowflake Has Meltdown Over Trump

VIDEO: Oklahoma U. Snowflake Has Meltdown Over Trump 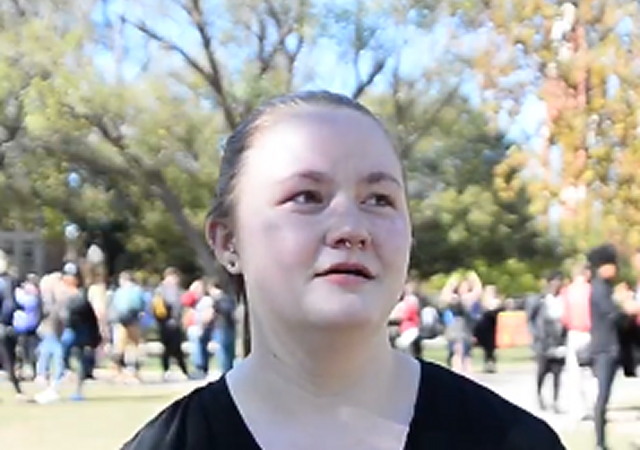 The young lady in the video below is apparently a women and gender studies major and she’s terrified by the prospect of a Trump presidency because she’s a “queer person.”

Young liberals seem to think Donald Trump is David Duke. Where could they have gotten such an idea?

The truth is that Trump is one of the most gay friendly Republicans ever. He was even photographed holding a rainbow flag on stage at an event. None of that matters to the snowflake crowd. To them, the only real Trump is the one who exists in the narrative in their heads.

Here's what last night's results mean to Darian Storms. What do they mean to you? pic.twitter.com/EaR30BfBQE

Well, she’s not wrong. Within seconds, I too hated her.

Actually we don’t hate you for being queer or a women, we hare you because you are an idiot and pretending not to be. Trump doesn’t hate you and half of America doesn’t hate you,they could just care less about you. Go to one of your safe places and have a friend slap the crap out of you. Are you really the future of America? God help us!

I loved the line: “…and people think we are being overdramatic “

It just seems so overdramatic.

To them, the only real Trump is the one who exists in the narrative in their heads.

Or, to be more precise: To them, the only real Trump is the one who exists due to the voices in their heads.

Just another verse in the Universal Suffrage Blues.

Now there is a student being prepared for future unemployment.

I need a Safe Space from snowflakes like her.

Oklahoma had a state question on the ballot – increasing sales tax by 1% to fund education. It was pushed by Boren (pres of OU). It was advertised as giving K-12 teachers a $5,000 raise with 69% of the proceeds going to K-12, 19% to
higher education with the promise of making colleges more affordable and the rest to the vo-tech programs.

It was defeated and most people I talked to said they would have voted for it if the funds to K-12 and vo-tech. But nothing more to OU.

Maybe that’s what this snowflake was worried about – her program might be one of the classes cut.

Yes, even saintly old Betty White is a tad fed up with snowflake hysterics.

If she only tried a little bit harder, she could have squeezed out a tear or two. This looked like a really, really bad audition tape. massively high opinion of herself also,convinced that people care one way or another about her sexual preference. I was offended by her stupidity,not her sexually.