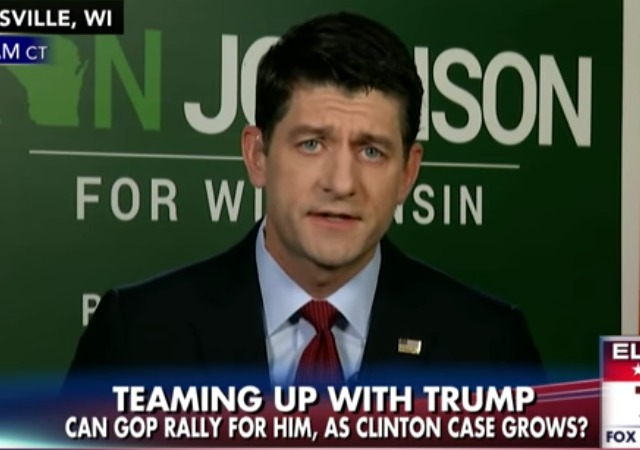 Despite Sean Hannity’s calls for a new Speaker of the House, House Republicans unanimously voted Ryan into his first full term.

From the Washington Examiner:

House Republicans on Tuesday unanimously nominated Paul Ryan to serve his first full term as speaker in the next Congress, casting aside the fears of some conservatives that he would not carry out President-elect Trump’s populist agenda.

The GOP conference, bolstered by their Nov. 8 sweep of Congress and the White House, voted to keep much of the entire 2016 leadership team in place for the next two years.

Ryan’s position, however, will not be secured until January, when the entire House, including Democrats, must vote to elect the speaker with 218 votes.

In all the blatantly silly anti-Trump hysteria, it’s easy to lose sight of the fact that everybody except the voters were (and still are) opposed to Trump. And that includes the Republicans.

The Republicans did indeed gain a great deal at the expense of the Democrats—in the House, the Senate, state governorships, state legislatures … but they didn’t win the White House. Trump won the White House despite them.

Gloat now, but I predict that Ryan will be licking the underside of Trump’s boot by the end of his first term. Ryan is a sucker. He’s going to get rolled by trump good and hard.

Probably a lot quicker than that.

Ryan is not exactly a man of adamantine principle.

When do the Senators get to pick a new majority leader. McConnell needs taken out to pasture.

I’d like to know just who attended this “closed-door meeting” where Ryan “was nominated in a unanimous voice vote”. How many Freedom Caucus members were present?