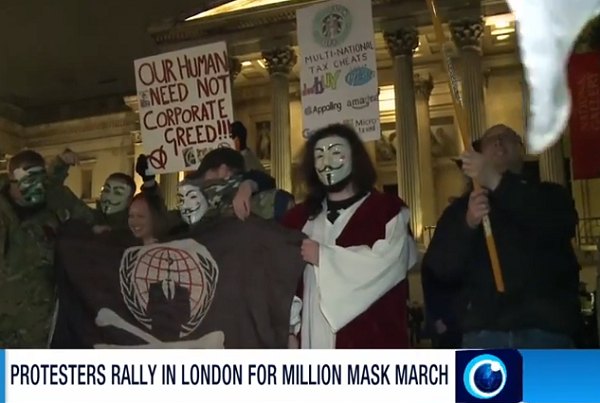 The annual anti-capitalist march organized by the hacking group Anonymous takes place on November 5, Guy Fawkes Day. This year, police arrested 53 people for a range of offenses from weapon possession to “non-removal of a face mask.”

Walking from Trafalgar Square, where the march started, protesters holding flares chanted “Whose streets? Our Streets!” as they made their way to Westminster.

Clad in Guy Fawkes masks, thousands of supporters of Anonymous, the anarchic hacking collective, carried placards as they made their way through the Capital while scores of police officers maintained a tight perimeter around them.

Scotland Yard said there had been 53 arrests, including three for possession of an offensive weapon, 14 for drugs and two for the non-removal of a face mask.

“Whilst the majority of those taking part were peaceful, there were pockets of disorder and a number of fireworks thrown which thankfully did not result in injury,” Scotland Yard said.

. . . . Fireworks were set off in the crowd near the Houses of Parliament and bottles were thrown.

Police had warned “masked criminals seeking to run amok” that they will be arrested if the protest turns violent.

Gee, it’s mighty ‘funny’ that because of capitalism, these lazy so-and-so’s don’t have to hand make their clothes, get there on foot, supply their own medical care, kill their own food and so forth. Hypocrites.