Chao is the first Asian-American female appointed to a Cabinet-level position. 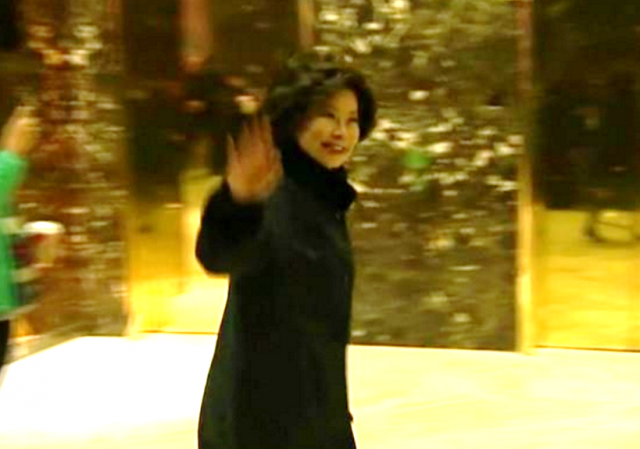 Chao met with Trump last week at Trump Tower where they discussed “labor and transportation issues with a particular focus on America’s long-term infrastructure needs, and reducing or eliminating burdensome regulations.”

Ms. Chao, 63 years old, was the first American woman of Asian descent to be appointed to the cabinet when she was named secretary of labor by then-President George W. Bush in 2001. She served all eight years that Mr. Bush was in office, and was his only cabinet member to do so.

A Harvard Business School graduate, Ms. Chao was a banker at Citigroup and president and chief executive officer of the United Way of America before she joined the Bush administration. In 2009, she returned to the Heritage Foundation, a conservative think tank in Washington, as a distinguished fellow and joined several corporate and nonprofit boards, including Wells Fargo, Dole Food Co. and the National World War II Museum. She also is a board member of News Corp., the parent company of The Wall Street Journal.

The Trump team said the Transportation pick will come on Tuesday:

Trump transition team spokesman Jason Miller told Fox Business Network earlier Tuesday that the president-elect will make an announcement about his pick for the next Transportation Secretary on early Tuesday afternoon.

“We’re excited with how the administration is coming together and we think this is gonna be a great day,” Miller said. “And don’t forget we also have another cabinet selection coming early afternoon today as the pres-elect continues to move forward.”

When pressed on which cabinet position will be announced in the afternoon, Miller simply replied, “Transportation.”

Elaine Chao will, amazingly, be the SECOND person to have been Sec of Labor, Sec of Transportation and married to Senate majority leader

We will update this post once the Trump team releases more information.

She was already an Asian-American woman when she was Secretary of Labor.

Well, Trump shouldn’t limit himself to rank amateurs in the posts—remember Bill Clinton’s circus-sideshow staff?—but this doesn’t look like big-league swamp-draining to me.

D’oh! Format trouble. How did this end up here?

Mitch McConnell’s wife. So you drain the swamp by hiring the Mud Turtle’s spouse?

I don’t trust anything connected with Mitch McConnell.

Is this designed to get McConnell on the team?

This is a great country.

I wonder what those Chinese laborers who help build the Transcontinental Railroad would think if they knew an Asian woman would one day be Secretary of Transportation?

Crap. Hit up vote instead of reply. I am Chinese. I am highly dubious of this. Yes, Chao is Chinese. I am also familiar with the concept of “Dragon Lady”. Her filling an affirmative action slot does not mean that she cannot work for the enemy. She is Mitch McConnell’s wife. If this is not a move towards “keeping your enemies closer” this is not good. He background includes head of the United Way. Not an ethical recommendation.

Ah yes, the same authoritative “sources” that had the Mittster pegged as SecState.

Meanwhile, all the appointments Trump himself has announced are all about actually enforcing the law at DOJ, repealing Obamacare at HHS, etc.

Do you ever get tired of #LOSING? or are you just a natural born sub?

Tell you what, asphole, I’ll apologize if the Chao announcement proves bogus.

You can apologize to me when it doesn’t.

Ms. Chastain, you really need to fix this post. The headline is wrong (she already became that) and “[t]he appointment makes” is wrong (the prior appointment already made her that).

I count on Legal Insurrection to get things right.

the first Asian-American woman to hold a Cabinet-level position.

Utterly irrelevent to the discussion. What is relevent is how the appointment of a career insider and spouse of an embedded politician would help deal with the problems of bloat and inflamed elitism.

“… how the appointment of a career insider and spouse of an embedded politician would help deal with the problems of bloat and inflamed elitism.”

Trump’s platform is all about building a wall, locking her up, and banning muslims. There’s nothing in there about dealing with bloat or inflamed elitism.

I hope she does a better job than Dole.

The similarities to the career of Elizabeth Dole are notable. Wife of a Senator, former president of a charity (Red Cross), former Secretary of Labor, and now Secretary of Transportation.

Anything related to that grotesque rino McConnell is tainted.

Well on the plus side. . I gues the infrastructure bill will have less Senate opposition. Hopefully Trump secured more than that with the appointment.. maybe a vote on Term Limits lol wild dreams

T-rumpulous will be broadly supported by both houses and both sides of the Collectivists.

Nanny Pelosi has already endorsed it.

Elaine Chao is the first “Elaine Chao” appointed to a Cabinet-level position.

Woman who marry chinless senator will go far and have much luck.

Trump needs the nuclear option in the senate. Anyone need an explanation?

She wanted Transportation under W but didn’t get it. Now she she has it.