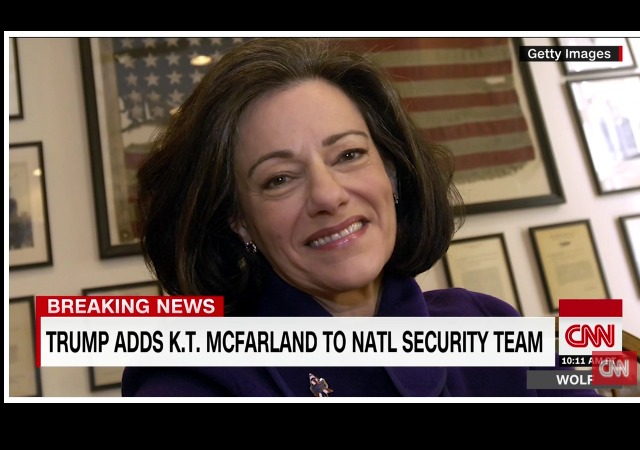 McFarland currently works for Fox News as a national security analyst after working “under three Republican administrations.” From The Hill:

“I am proud that KT has once again decided to serve our country and join my national security team,” Trump said in a statement. “She has tremendous experience and innate talent that will complement the fantastic team we are assembling, which is crucial because nothing is more important than keeping our people safe.”

Others have praised the selection:

“In asking KT McFarland to become his Deputy National Security Advisor, President-elect Trump has brought to the top ranks of his Administration one of our country’s most experienced, informed, and wise foreign policy and national security experts” former Sen. Joe Lieberman said in a release. “She is a woman of honor, compassion, and patriotism.”

McGahn worked as Trump’s campaign lawyer and used to belong to the Federal Election Commission. He currently holds a position at Jones Day, “where he has specialized in political law.” The Wall Street Journal continued:

His role in the Trump administration promises to be an important one as the incoming president determines how to handle possible conflicts of interest created by his global business interests. President Barack Obama said last week that he urged Mr. Trump to find a “strong White House counsel that could provide clear guideposts” on those business entanglements.

“Don has a brilliant legal mind, excellent character and a deep understanding of constitutional law,” Mr. Trump said in a statement. “He will play a critical role in our administration, and I am grateful that he is willing to serve our country at such a high-level capacity.”

Some have wondered how McGahn will do since the legal advisor to the president “has involved occasionally arguing to restrain what the chief executive wants to do:”

“It will be interesting to see how Don’s suspicion of government — his deep libertarianism — will affect his advice on questions of executive authority,” said Bob Bauer, who served as White House counsel for President Obama. “And as somebody who has never shied away from a fight, he would not likely be a ‘yes man’ in this or any other aspect of the job.”

Neither one will require Senate confirmation.

16 of the best and brightest the GOP had to offer ran in the primaries. Still waiting for at least one of them to be asked to join the Administration.

“Ben Carson declined an offer from President-elect Donald Trump to join his cabinet as Secretary of Health and Human Services, a close Carson adviser told CNN on Tuesday.”

Of course, Chris Christie lost his spot as head of Trump’s transition team. I don’t know of any others.

“16 of the best and brightest the GOP had to offer ”

With a few exceptions, that’s not saying much.

Trump seems to largely be doing a good job with his picks.

How they perform remains to be seen, but some like Devos seem very good.

I am waiting for a few more key picks like EPA for a real sign of where he is going and how much reform, but boy would love to see him follow through on tearing down the bureaucratic infrastructure cemented into places in many of these agencies.