The View reacts to Trump election pretty much as expected

The View reacts to Trump election pretty much as expected

It was everything I had hoped for. 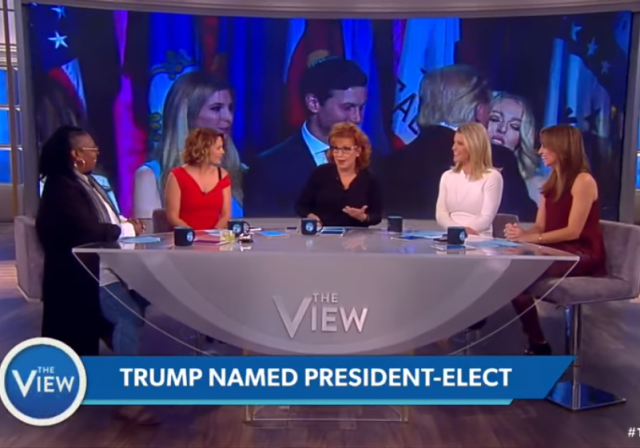 The comment by Joy Behar that one party hasn’t controlled the presidency, House and Senate since G.W. Bush is wrong — for two years under Obama Democrats controlled all three, with a filibuster-proof majority in the Senate until Scott Brown’s election in January 2011.

It was everything I had hoped for.

Is The View still on TV? What network and time? Definitely want to watch today https://t.co/zN2fFHIzpy

once again……good googly moogly, that is a gaggle of out of touch ness right there!

These women are so ignorant and ill-informed that them having a TV show to disseminate their lunacies should be chargeable the same way yelling “FIRE!” in a crowded theater is.

Let’s bring him back for an encore……
https://www.youtube.com/watch?v=jy8FSyI_Djg

Go ahead, ladies. Keep on flying the stupid flag.

They really make the case for repealing the 19th amendment, don’t they?

Well Whoopi, no one has said that they want to take kids parent’s away because they are Muslim, Black, or Mexican. Now he has said it may happen if they are here illegally and in that case are criminals. Whoopi is race baiting again.

By the way, we split fathers and mothers from their children every day in this country; it’s called divorce, imprisonment, et cetera. Mexicans shouldn’t get a free pass that Americans don’t get. Mexicans are treated as super-1st class citizens and Americans as pack mule pieces of dirt. No thanks.

Isn’t Woopie supposed to be on a plane?

You know that if Hillary had won and both the House and Senate were in control of the Democrats, Joy Behar wouldn’t be moaning about the need for checks and balances and how they are watching, blah blah blah.

I thought Whoopi promised to flee the country?

She has to find one that will take her, first.

“One party hasn’t controlled the presidency, House and Senate since Bush…”. The irony is the two years of “in your face” “jam it down their throats” politics while Dems owned everything has led to this Election. Obama and the few Dems who are still standing have marched the Dem Party of the cliff.

Vanity. It really is the defining sin of this age.

I agreed until you said “cutter.” I know of them; some of them have been horribly abused so I can’t class them with the likes of Behar or Goldberg. No way.

Fair enough. I actually paused and considered not using that term, as I didn’t want to use their suffering as a prop to make my point.

I tend to get a bit hyperbolic. Thanks for the correction.

I’m trying to think of a better metaphor…

I think they are just competing to be the dumbest hammer in the sack.

eh, I wouldn’t let the attempt to come up with a sharper one cut too deeply into your time…

Those bitter shrews should watch this clip of their fellow prog and consider that they are among the group to whom the message was delivered.

The only thing that is missing is Rosie O’Donnell

The pressure is on the Republicans. Get it right, ladies and gentlemen.

Whoops makes my skin crawl. She is a race baiter and always has been. When ya leavin the country girl. I felt sorry for Candice Cameron to have to listen to whoopie spew so much hatred out of her mouth. Noticed she didn’t like when she spoke of God hmmm makes me think she is evil And Joy she’s just as bad suck it up ladies we have a new President like or just leave like you promised

To be fair, they are viewing reality from the darkest fringes of the twilight zone. Baby steps.

The face of liberal hypocrisy on display.

And their audience is their echo chamber.

It’s important that Trump doesn’t make the mistake of trying to please idiots like them by appointing a “moderate” Supreme Court justice or not allowing his attorney general to go after the criminals in Washington. If he doesn’t “clean the swamp ” his administration will be a failure.

If he doesn’t “clean the swamp ” his administration will be a failure.

You’re setting the bar artificially high. It’s already a success—he kept The Pantsuit Monster out of the White House. After that priceless service to America, he can be put on Rushmore for all I care … except that it would be impossible to render the hair realistically in granite.

What are they complaining about? Obama created this.
Obama’s legacy is to decimate the Democratic party, to create President Trump, a Republican Congress and a Republican Senate.

Fen: I’m using a smartphone and the mobile version of LI doesn’t show comment nesting. You were searching for a metaphor in place of cutters.

How about those who install loud pipes on their motorcycles? They constantly blip the throttle at stop signs and signals. “look at me!!! LOOK AT ME!!!”

The take away by the media on this election? That they were terribly wrong. Oh, no, not that kind of wrong. It’s not possible that their original opinions were wrong.
No.
They have decided America is even more racist than they could possibly have imagined! Rednecks, hillbillies and hayseeds as far as the eye can see! White men who wear red hats and stained tank tops and like to beat their wives while cursing at the coloreds and Mexicans and homos!
Yeah… that’s the ticket.

Heard on Rush yesterday that a lot of women and men with college degrees lied to the pollsters about who they were supporting. One pollster started asking respondents who they thought their neighbor was voting for and found a pattern that led to a bit more accurate numbers.

The liberals have become so violent that people no longer want to have these unwashed, in your face jerks screaming at them at the top of their lungs. So they agree with them just get them to move on to another target. Soros has deep pockets and it looks like he hasn’t changed his payola after watching the demonstrations (riot training for libs) the other night. Hope Trump and his crew find a way to make him flee the country.

Also I’m relishing the democrats tears because not that long ago they decided the “uneducated” white male wasn’t worth pursing for votes. KEK.

And finally, thanks Professor, for being able to actually sit through an entire show of The View. Ugly, rich, self entitled women being paid to expose their stupidity isn’t high on my list of ways to waste time.
I’d rather pick up my cats puke bare handed. Much less messy and smells nicer.

That has an easy answer.

Soros is wanted in France for tax evasion. The British want him for collapsing their currency. The Ukraine government also wants him for the same reason.

The sonofabitch is funding violent thugs who are burning our cities and murdering our cops and citizens. All for the purpose of fomenting political change. The last time I checked, that is the definition of terrorism. I’d like to see the motherfucker droned.

Elitist, hypocrite feminists each doing their best to out-do each other. How long will it take for Mike Obama to be put in place of Candice?

If the Professor watched the View just to watch them squirm, then I watched Seth Meyers do the same thing for the same reasons.

Seth Meyers’ show has consisted of insulting Trump and Trump voters with nasty identity based attacks for 2 years. “Comedy”?

His meltdown was pretty glorious.

What happen to that checks and balance for the last 8 years?

Nothing but a hot mess! Clueless, out of touch, afraid, uninformed, victim hood

Oh my gawd!!! It’s like the Bird House at the zoo. The non-stop squawking … give me the Reptile House any day.

Put their entire tv set on wheels and ship them across the border.

Don’t even tell them it’s being done.