The Invisible Hand delivered your turkey

The Invisible Hand delivered your turkey

Thankfully, we have no Turkey Czar 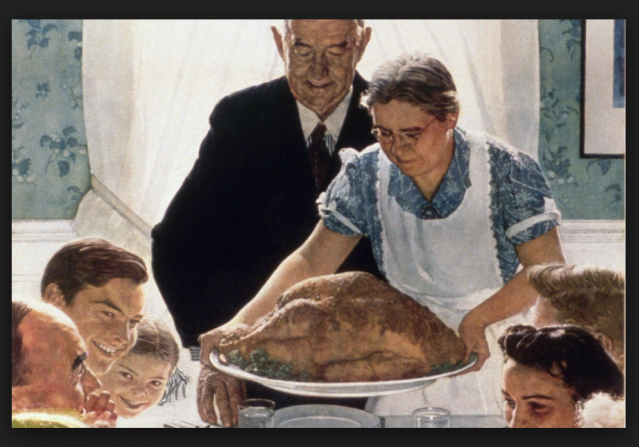 Jeff Jacoby, The Boston Globe, November 27, 2003, Giving thanks for the ‘invisible hand’:

Isn’t there something wondrous — something almost inexplicable — in the way your Thanksgiving weekend is made possible by the skill and labor of vast numbers of total strangers?

To bring that turkey to the dining room table required the efforts of thousands of people — the poultry farmers who raised the birds, of course, but also the feed distributors who supplied their nourishment and the truckers who brought it to the farm, not to mention the architect who designed the hatchery, the workmen who built it, and the technicians who keep it running. The bird had to be slaughtered and defeathered and inspected and transported and unloaded and wrapped and priced and displayed. The people who accomplished those tasks were supported in turn by armies of other people accomplishing other tasks — from refining the gasoline that fueled the trucks to manufacturing the plastic in which the meat was packaged.

The activities of countless far-flung men and women over the course of many months had to be intricately choreographed and precisely timed, so that when you showed up to buy a fresh Thanksgiving turkey, there would be one — or more likely, a few dozen — waiting. The level of coordination that was required to pull it off is mind-boggling. But what is even more mind-boggling is this: No one coordinated it.

No turkey czar sat in a command post somewhere, consulting a master plan and issuing orders. No one forced people to cooperate for your benefit. And yet they did cooperate. When you arrived at the supermarket, your turkey was there. You didn’t have to do anything but show up to buy it. If that isn’t a miracle, what should we call it?

Adam Smith called it “the invisible hand” — the mysterious power that leads innumerable people, each working for his own gain, to promote ends that benefit many. Out of the seeming chaos of millions of uncoordinated private transactions emerges the spontaneous order of the market. Free human beings freely interact, and the result is an array of goods and services more immense than the human mind can comprehend. No dictator, no bureaucracy, no supercomputer plans it in advance. Indeed, the more an economy is planned, the more it is plagued by shortages, dislocation, and failure.

It is commonplace to speak of seeing God’s signature in the intricacy of a spider’s web or the animation of a beehive. But they pale in comparison to the kaleidoscopic energy and productivity of the free market. If it is a blessing from Heaven when seeds are transformed into grain, how much more of a blessing is it when our private, voluntary exchanges are transformed – without our ever intending it – into prosperity, innovation, and growth?

So yes, thank the Invisible Hand for your turkey.

But you still have to carve it. Unless, of course, the Invisible Hand pre-carved it for you because you are too damn lazy and willing to pay a little extra.

Someone should teach that story in grade schools today.

Meanwhile, in the Socialist paradise of Venezuela, food and medicine are scarce. I wonder if Sean Penn and Danny Glover are virtue signaling by working a food bank.

One Invisible Hand to cook them all and in the darkness taste them.” (Another power outage on Thanksgiving, dang it.)

To see the Invisible Hand at work, take a drive down the Central Valley of California from Sacramento to Bakersfield some day. You’ll see miles of fields of produce and livestock, dairy farms, orchards, and the like, and trucks hauling their goods every which way. Somehow it all winds up in your grocery store. It’s a miracle happening before your very eyes.