The bomber managed to penetrate his way into a heavily secured base. 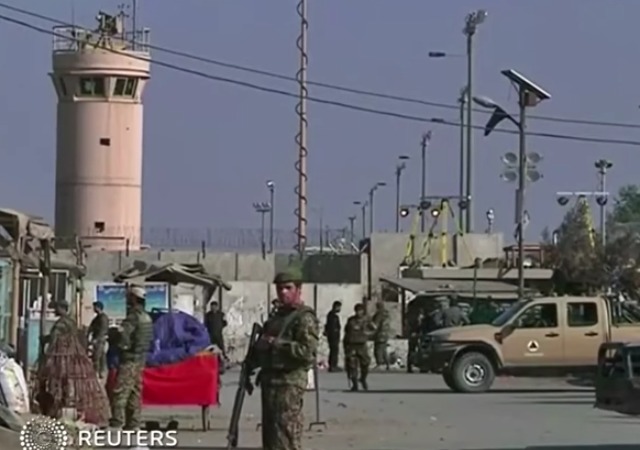 A Taliban suicide bomber managed to find his way into a U.S. military base in Kabul, Afghanistan, where he detonated a bomb and killed four Americans. The blast left 16 wounded:

The suicide bomber at Bagram Air Field had been dressed as a day laborer and detonated the explosives in the vicinity of a dining facility around 5:30 a.m., according to a foreign security source. The sprawling base, which contains tens of thousands of contractors, is often targeted by Taliban rockets and attacks on patrols near the base, but suicide bombers hadn’t previously succeeded in breaching the outer layers of security.

Carter offered his condolences to the families of those killed and said the injured were getting the best possible care.

“Force protection is always a top priority for us in Afghanistan, and we will investigate this tragedy to determine any steps we can take to improve it,” he said.

“For those who carried out this attack, my message is simple. We will not be deterred in our mission to protect our homeland and help Afghanistan secure its own future.”

The 16 wounded included U.S. service members and a “Polish soldier participating in a NATO mission.”

“NATO remains committed to our mission to train and support the Afghan forces. We all stand united in the fight against terrorism,” he said in a statement.

Taliban spokesman Zabihullah Mujahid confirmed the terrorist group performed the attack and they planned it for four months.

Now the Pentagon must confront security issues. As mentioned before, officials kept the base heavily guarded and yet the bomber found his way inside. CNN Pentagon correspondent Barbara Starr addressed the issue:

“The question now is, how did someone get inside?” she said. “There’s very strict security at these bases. … If you come in a vehicle, you are stopped well before the outside gate. Vehicles are searched, people are searched, people must have ID — so it’s very difficult to understand right now how this happened.”

There are about 14,000 people on the Bagram base, with about 60% contractors, according to Starr. Locals move on and off the base in some contractor roles, she said.

Security breaches at coalition bases in Afghanistan have occurred but are rare, she added.

Will the Trump-inspired violence never end?!

More than 2500 soldiers have died in Iraq and Afghanistan since Obama took office.

over 2/3 of those killed in the war in Afghanistan have been under his watch.

If we aren’t going to get out of there, at least let our military fight back by stuffing Obamas Rules of Engagement right up his ass.

We are currently fighting 5 wars. What happened to the Left’s Anti-war protests? Ah yes, they don’t really believe in the things they lecture the rest of us about. And are currently rioting just days after lecturing Trump about not agreeing to accept the results of the election…

What happened to their Anti-war protests?

They don’t know that we’re engaged in five wars. But don’t worry. By the end of January, you can be sure they will.

When Bagram was under complete U.S. control and the USAF running perimeter security, this kind of attack would have been impossible. The Afghans were given two checkpoints on inroads and these were well outside the wire. These Afghans were brave kids but the crown jewels were protected by our guys, and they were trained to be not-very-nice-if they-didn’t-know-you.

If that’s changed, somebody in the chain needs to be cashiered.

Was it another one of those Blue Mountain security deals like Benghazi?

Probably another Green on Blue inside job.

As the Koran says, lie to the infidels until you can kill them.