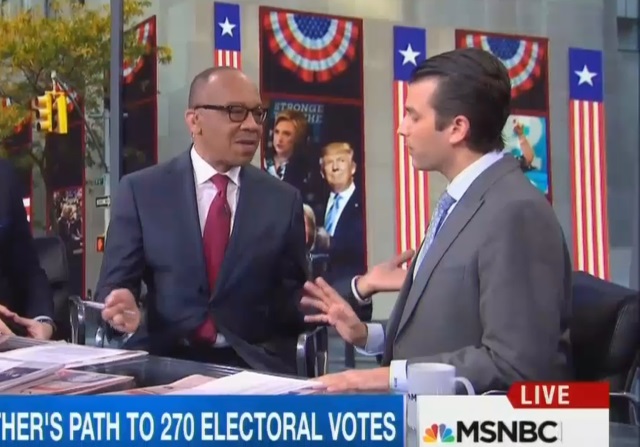 Ivanka has attracted attention as the Trump most likely to have a significant political future. But don’t sleep on Donald Trump, Jr. Appearing on today’s Morning Joe, Trump, Jr. was impressively thoughtful, articulate, substantive and nuanced, without for one second backing down from making his case forcefully and unapologetically.

For a taste of Trump, Jr., view the video as he unblinkingly attacks the double standard, asserting that any average American who had done what Hillary did with her email would be in jail. And when Eugene Robinson of the Washington Post scoffs at his assertion that African-Americans and Hispanics speak encouragingly to family members, Trump, Jr. politely rebuffs him.

Interesting factoid that emerged at end of interview: Trump, Jr. has five children . . . all with the same wife, who by the way is partly of Jewish heritage. Along with Ivanka that makes two Trump children with a Jewish connection. Which makes those accusing Trump of being a secret anti-Semite look sort of silly.

MIKA BRZEZINSKI: Your dad, there are so many things to parse through in terms of what he said. He had said if he loses this would be a big waste of time big waste of money. Is that what he really believes?

DONALD TRUMP, JR.: I don’t know: there’s an element, it is a lot of energy that has been put into this, and we want to try to change this, and if a candidate with the other side, with the other track record, that corruption all the things we are reading about, if we elect that person and say hey, that’s all okay, I think it does send a terrible message to our children, I think it sends a terrible message to the political class that, hey, as long as you get to that elite status you can do these things and there’s no accountability.

And that’s so much what this election has been about, it has been about that accountability. And there is a different standard, and regardless of what happens with the email situation, I don’t think anyone watching right now, anyone in this room would ever believe if they did the things that Hillary Clinton did with those emails, if they sent classified documents to their maid to be printed, that people would say: hey, it’s incredibly reckless but it’s okay. We’d all be in jail and everybody knows it. So I think we want to make sure that we shed light: there should not be a double standard for the political class once they achieve a certain level.

I spent all of my day yesterday in Michigan, I was in New Mexico the other day, Colorado, some of the purple states. We’re spending a lot of time in those places, and I think there could be a lot of upsets in those states, because the sentiment I am getting from people on the ground, and I don’t just mean where people are showing up to hear me speak, I mean at the gas station where no one knows we are going to be there, and they’re coming up and saying you are doing great, keep it up.

TRUMP: We’re going to do better than that, I promise you that. That’s the narrative that’s out there, but that’s precisely — and by the way, some of those people will come up to me and say [stage whisper] you guys are doing a really good job, sort of in a whisper. There are the people that are loud and vocal, but there are the people that have been put in this box, saying we are not supposed to for whatever reason, because our party has been owned — it doesn’t work but they have come up to me and they’ve said that, and it’s amazing to see.

I voted Guilty this morning. Hillary for Prison 2016!

But, hey, I am just an old white guy.

I have been reading Eugene Robinson in the Washington Post for many years. There was a time when his columns made sense. That ended during the first Obama presidential campaign, when the tone of his columns suddenly changed. He has been unloading hatred and unfounded scandalous accusations on the political opposition, every week, ever since.

He is one prejudiced, untruthful SOB.

I am glad to see young Mr. Trump handling himself well, but it reminds me of another man with reasonable demeanor. I wonder if he will start getting the same untruthful treatment from the media as his father.

Eugene Robinson, why in the world would you say 1%?

Maybe 1% with the kinds of people Robinson mingles with but no doubt out in the real world ™ that percentage is significantly higher!

I do realize that Robinson has deep, deep roots into the soil on the Liberal Plantation, but even he knows that it’s beyond 1%.

It doesn’t matter how much of a lie it is. All that matters is they got it out, during the interview, and in a way that sticks with the watcher.

The interviewer is *always* considered pure and truthful by a viewer, so if they say a lie out loud, EVEN if the candidate refutes it with hard facts moments later and forces a retraction, the original lie will stick. What’s worse, if you watch carefully, the interviewer will lie about something, and then when the candidate is attempting to refute the lie, the screen will flash to a pre-written caption with the lie repeated, OR they’ll pan the camera away from the candidate to play a video clip that reinforces the lie.

Interesting that they also had to get the graphic up about percentages which actually had nothing to do with the conversation. It was almost as if they had it ready for when Robinson said 1%? The media wouldn’t collude like that would they?

As far as Donald Trump, Jr. goes. I don’t think I see anything special. What he’s saying is right, but he didn’t kill it.

He did it without a teleprompter. Who was the last democrat that didn’t use a t-t-t-t-eleprompter?

Have to disagree. He was confident, direct, sincere and expressed himself without giving ground to those that disagreed with him. I’ve been impressed with the Trump kids (not that they’re kids) and hope that if he is interested he would consider a run at it.

The Left is hopelessly stuck on class diversity. Hopefully, as they are relegated to the dustbins of history, along with their infamous counterparts from the past, people will be judged by the content of their character, not the “color of their skin”, and institutional racism, sexism, etc. will finally be defeated.

The out and out bias and prejudice of Liberals is astounding, but not unexpected.

Eugene Robinson is just a little cog in the Crooked Hillary spin machine. He has been told … push the 1% nonsense so black voters would feel guilty if they dare think about voting for Trump.

What’s happened to our country when folks get excited and find it remarkable that someone famous spoke adequately?