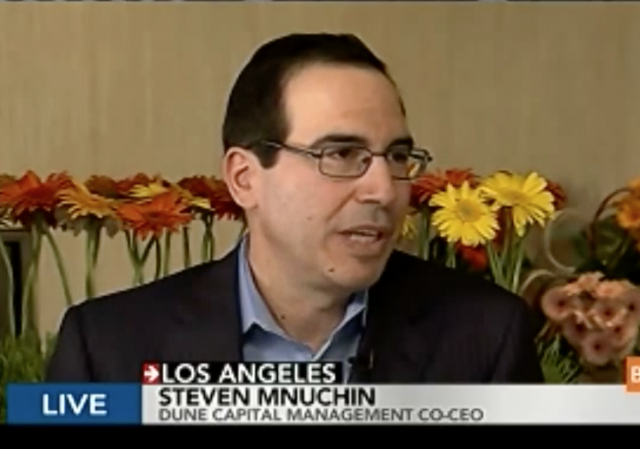 The New York Times reports Donald Trump will officially announce Steven Mnuchin’s appointment to the post of Treasury Secretary as soon as Wednesday. Mnuchin as no government experience (though that’s not terribly uncommon for Treasury Secretaries), but served as Trump’s Campaign Finance Director.

Mr. Mnuchin, 53, was the national finance chairman for Mr. Trump’s campaign. He began his career at Goldman Sachs, where he became a partner, before creating his own hedge fund, moving to the West Coast and entering the first rank of movie financiers by bankrolling hits like the “X-Men” franchise and “Avatar.”

As Treasury secretary, Mr. Mnuchin would play an important role in shaping the administration’s economic policies, including a package of promised tax cuts, increased spending on infrastructure and changes in the terms of foreign trade. He could also help lead any effort to roll back President Obama’s nuclear deal with Iran and opening to Cuba by reimposing sanctions on Tehran and Havana.

Mr. Mnuchin, the son of a Goldman Sachs partner, joined the firm after graduating from Yale University. He worked there for 17 years, rising to oversee trading in government securities and mortgage bonds.

After leaving Goldman in 2002, he founded Dune Capital Management, a hedge fund named after the dunes near his beach house in the Hamptons.

He also started investing in the movie business and bought a house in Bel-Air. He is engaged to the actress Louise Linton, who would be his third wife. He told The Times in May that he has focused in recent years on the “West Coast economy,” although he added that he was not turning his back on Wall Street.

Mr. Mnuchin was part of a group that bought the failed California mortgage lender IndyMac from the government in 2009. He became chairman of the company, renamed OneWest, which was ultimately sold to CIT, the nation’s largest small-business lender, in 2015 for more than twice the price the group had paid.

Well, he did do wonders with the donations of Trump supporters. $5 a vote versus Hillary’s $10 a vote.

So how does one pronounce Mnuchin?

Golly. ANOTHER Goldman-Sachs alum, along with Steve Bannon.

I thought that was the kiss of death when we were talking about Heidi Cruz.

Huh. I just have to marvel at the hypocrisy of T-rump and his suckers.

He has strong ties to both George Soros and Democratic candidates. More than half of his federal-level contributions have gone to Democrats, including Barack Obama and Hillary Clinton, and $2,000 to California AG Kamala Harris’ US Senate campaign. And:

From 2003 to 2004, Mnuchin worked as chief executive of SFM Capital Management, which the Wall Street Journal reports is backed by Soros. He also worked for Soros Fund Management LLC, according to Bloomberg.
===RedState

T-rump IS Mr. Establishment. I toldja…

You are a blind man, being led by the blind, in a dark room, underground, at night.

So far everything you have told us has been complete and total bullshit.

LOL, you are pathetic. In a field of nuclear weapons grade issues, you come up with the field mouse as “proof” that you aren’t full of it.

I told you Trump would win the R nomination in back in October. You laughed and belittled the comment.

I told you Trump would win the presidency in a landslide victory. You laughed and belittled the comment.

I told you your “preference cascade” was nothing more than your fevered imagination. You laughed and belittled the comment.

You’ve pushed your BS for months, always wrong, always siding with the left, and now you want to say ” I told you so.”

You’re a laugher. And on the wrong side of history, the same side as the left.

Smart people usually do not need to tell others how smart they are, except for progressives.

Not only progressives have been out of touch with what’s going on.

You should deal with the reality of these people that Mr. Establishment is surrounding himself with.

They are NOT the people he sold you.

Reality:
#NeverTrump lost.
Losers don’t get to drive the bus.
Trump’s choices are better than #NeverTrump’s would have been.
Criticism of him is all speculation since he hasn’t taken office yet.
If Trump walked on water and fed the multitudes, it would not satisfy his critics.
Criticism from the #NT crowd is not honest criticism. Its goal is to destroy, not enlighten. Its primary purpose is to justify ‘I told you so!’
The voters rejected #NT during the primaries.
The voters rejected #NT during the general election.
The voters still reject #NT.
#NT is the party of sore losers, by sore losers, for sore losers.

#NeverT-rump was never a “party”.

#NeverT-rump ended with the election.

#NeverT-rump could not “lose”. We simply would not vote for an unfit person of ANY party.

T-rump has not taken office, but that does not silence people who watch him and his conduct, ThoughtPolicing goon.

“I told you so” is perfectly valid criticism, you lying sack of filth.

And THAT’S reality. Eat it.

Don’t think you are dealing with reality at all.

Do think you are spewing.

You still did not reveal why it’s necessary to crow about how smart you are, incessantly.

Rags,
#NT is a political movement that put up a candidate for president. Sounds like a party to me. I will agree that they lacked the brains and skill to do it effectively, but that only makes them a bad party.

The #NT movement did not end with the election. The core simply morphed from a group that wanted to prevent Trump’s presidency to one that wants to destroy it. Witness your continued posts on the subject. SSDD

#NT lost. #NT’s key idea was rejected by the voters, who elected Trump.

Pointing out that your criticisms are speculation on actions that haven’t occurred is hardly ThoughtPolicing. Trying to silence my criticism with your bullying is ThoughtPolicing. If you ever do have a thought I won’t try to police that either.

I never said it wasn’t valid criticism, I said you are not a valid critic. You are not a neutral observer, but rather a political hack with a rabid anti Trump agenda, which you bring to every argument, that destroys your judgement and makes it impossible for you to have a rational view. Anyone reading your criticisms should take that fact into consideration if they are searching for the truth.

(remarks to self about “projection”)

-so, Mr Moo..Mnuchick..Mnuchin. how to strengthen the country’s economy?
-what can I say. X-Men strategy of course

So much winning! love the salivating going on by the haters….hahahahahaha 🙂

It’s your fault we were blighted with that? I might be able to waver on things like having come from Goldman, but that is one affront too far.

Why would anybody want that job?