Update: Steve Bannon to be Chief Strategist and Chief Counselor to the President 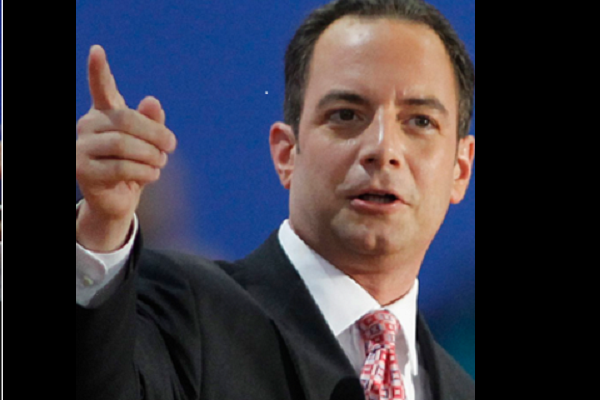 According to reports, President-elect Donald Trump is naming Reince Priebus his Chief of Staff.

Donald Trump is expected to name Republican Party Chairman Reince Priebus his new chief of staff, placing the longtime GOP operative in one of the most powerful positions in the White House, according to two sources familiar with the decision.

The announcement could come as soon as Sunday, one source said.

Priebus should be a reassuring presence to establishment Republicans still uncertain about what a Trump White House will look like. The pick signals that Trump may look to build bridges in Washington and keep continuity with longtime Republican agendas, as opposed to make waves from the beginning.

Priebus is among the longest serving chairman of the Republican Party, and has generally been popular amid different factions within the party. He is largely credited with building the ground game that elected Trump and with helping to unite his party after a divisive primary that resulted in many Republicans shunning Trump’s nomination.

The formal announcement is expected in the next hour or so, and we will update at that time.

Reince Priebus will be chief of staff, source who spoke to Trump tells me. Announcement could come in the next half hour

A press release from Trump’s transition team confirms Reince’s new role as chief of staff and announces Steve Bannon as Chief Strategist and Senior Counselor to the President.

Bannon and Priebus will continue the effective leadership team they formed during the campaign, working as equal partners to transform the federal government, making it much more efficient, effective and productive. Bannon and Priebus will also work together with Vice President-elect Mike Pence to help lead the transition process in the run-up to Inauguration Day.

“I am thrilled to have my very successful team continue with me in leading our country,” said President-elect Trump. “Steve and Reince are highly qualified leaders who worked well together on our campaign and led us to a historic victory. Now I will have them both with me in the White House as we work to make America great again.”

“It is truly an honor to join President-elect Trump in the White House as his Chief of Staff,” added Priebus. “I am very grateful to the President-elect for this opportunity to serve him and this nation as we work to create an economy that works for everyone, secure our borders, repeal and replace Obamacare and destroy radical Islamic terrorism. He will be a great President for all Americans.”

Didn’t Kellyanne Conway say this was coming? She may not have named him exactly, but I thought others guessed it when she said “imminent”.

Drain the swamp, eh? Anti-establishment? Blow it up?

You need to be able to work the system before you can blow it up. Trump needs someone who knows the ropes and can help him advance his agenda.

And your choice for Chief of Staff would be….?

Or are you just someone who likes to complain?

Oh, bother – The Donald’s first mistake of his presidency.

At best, Prebus is an undertalented, tired remnant of the feckless GOPe and the sorry days of the pathetic Squeaker Boehner.

With so many talented fresh faces ready to serve, why would he choose this underaccomplished retread?

One might not like Priebus, but he was SUCCESSFUL. The GOP won the Presidency and kept both the House and Senate and increased the number of elected Republicans at the state and local level. The national party got votes to the polls and voted.

This actually makes sense to me. Trump needs to both satisfy his base (hence the appoint of Bannon as Chief Strategist and Senior Counselor), and to work with establishment Republican types on the hill to get legislation passed (hence Priebus). Plus that leaves Trump in the position of making executive decisions where they disagree, which suits his management style.

My thoughts exactly. Also, I would bet that Chief of Staff is a much less powerful position than Chief Strategist by the time things are all said and done.

The next ones we need to look for are the Surgeon General (Really hoping Carson will be appointed to this), AG, (Rudy Giuliani all the way) Sec. Defense (Hoping for Mike Flynn), and Press Secretary (Mrs. Conway 100%).

But I think the next most important one will be his National Security Advisor. I don’t really know who would be good for this one to be honest

I never could stand the guy very much. But then again, after all these years dealing in DC, there are very few I ever could…

Sheesh people . This is a good pick because Trump needs someone who knows where the bodies are buried. Bannon is too much like Trump IMO. Someone needs to be the calming influence. It also helps settle the angst of the people he needs to help him get things done. You really can’t expect Trump to not try and get some GOP help on board.

Remember the old Georgia boys who came with Jimmy.

Priebus is friends with Ryan. He will help Trump get what he wants from The House. Good move IMO.

I honestly don’t look for Ryan to retain the speakers chair.

Ok ok, I guess if it were a choice between Prince Reebus and Bannon we dodged another bullet.

But this turd polishing should get tiresome eventually……

Are you always a crank or just on websites?

Hmm. ideologically not perfect, but CoS is the guy doing the day to day work of President. Do do the job you need a lot of experience dealing with bureaucracies which Priebus has. You also need someone who will work within your agenda, and not undercut you. Since just before the convention Priebus has demonstrated that he would do that.

So from a practical view he makes good sense.

I groaned when I first saw this too.

But someone else pointed out that fact that under his chairmanship, Priebus (along with Steele prior to 2011) has helped Republican take around 1000 state legislative offices that were held by Dems.

While Obama made that easier for him buy urinating on everyone in flyover country, it’s seems he quite good at election strategery. He knew which states to hit hard.

But it also took a candidate that had the stamina and determination to hold 3-4-5 rallies a day in different states for weeks on end.

I’m curious as to how many rallies Trump had since the nomination compared to past candidates. Everyone kept bringing up that Romney had big crowds, but that was only in the final couple of weeks and they darned sure weren’t anywhere near that number or pace.

Based on the Huff posts reaction, the choices would seem pretty solid and respectible

Are they still refusing to cover Trump in other than the entertainment section?

I hope the Transition guy becomes the head of the EPA, that is what they are really afraid of.

There was a report the other day that EPA staff were crying when they learned President Trump was coming in.
I kind of liked reading that.

Are they going to have a special handler who keep Der Donald in Chinese thumb cuffs so he can’t tweet? Or will Reince do that?

I am thinking the Press Secretary, who I am betting will be Mrs. Conway.

bannon will be DT’s val-jar.
She of the MB, he of the alt/right.

will monitor a bit before formulating opinion

Looks fine to me.

I wouldn’t strain my eyeballs looking for much “bridge building” to the Republicans, though. I think this is about as far a bridge as we’ll see. Trump isn’t going to go chasing after the R’s; they can follow him, or fade away. That old rubbish heap of history is getting higher and deeper all the time.

Bridge *to* the GOPe or mole *from* the GOPe. You be the judge.

Interesting way to look at it, Gremlin. I’ll have to give you another “like” on this one. And probably a bit of truth to it as it wouldn’t be the first time this was politically done.

Do I really have to explain that Priebus, if he were taking advantage of the offer to mole for the GOPe, most likely wouldn’t tell Trump he was doing it? Just because Trump loves him some Priebus doesn’t mean Priebus loves Trump.

People seem to be forgetting what Reince Priebus did before he became the head of the national GOP. He was the head of the Wisconsin GOP. Remember Scott Walker, the anti-teacher union Act 10, and all the wonderful progress resurrecting the Republican party in Wisconsin?

That was Reince Priebus.

Honestly I am less worried about Reince and more worried about he empty GOP party chair and who’s keester they are measuring to fill it.

When Walker asked Trump for a donation he refused. When asked why DT stated that he refused because Walker was hurting the teachers union.

Priebus prefers to operate as a ghost, so it’s not at all surprising that most folks know very little about him. Wisconsin voters didn’t know who he was until he was gone. He took to the Sunday morning talk show circuit promoting Trump after the nomination because nobody else would, but he never looked comfortable doing it. He’s one of those barely visible guys who just gets things done.

It hasn’t even been a week since Election Day and already President-Elect Trump is demonstrating that he’s ahead of Obama’s early days. That is, he realizes that one doesn’t govern in the manner in which one campaigned.

I’ll be greatly surprised that after all the team has been picked there aren’t quite a number of kudos coming Team Trump’s way.

When you look at what the man accomplished it’s actually pretty impressive.

I would imagine a great deal of the date derived from the outreach programs he started went into Trump’s victory.

With the choice of Bannon it seems we are getting to see what is really in Pence’s heart. Or the revelation that he will have no input at all.

Priebus is extremely talented when it comes to herding cats. He builds movements and keeps outsized egos moving in the same direction. His name is on nothing while his fingerprints are on everything. He did it in Wisconsin when Wisconsin was a dark blue state. That’s why he got the national job. Trump would probably not be the President-elect and McConnell and Ryan would not be the happiest guys in DC with a lesser talented RNC chief. Herding all of these narcissistic assholes in the same general direction was a Herculean task, but ahead lies the most difficult task of all. Governing will almost certainly prove to be every bit as contentious as the election process itself. Now would be a really bad time for Priebus to take his talents and go home.

As long as Bannon is there it seems a fair choice. I do hope to see Michele Bachmann running the IRS or HHS.