Regions Bank: Insulting Obama Will Get You Fired

Regions Bank: Insulting Obama Will Get You Fired 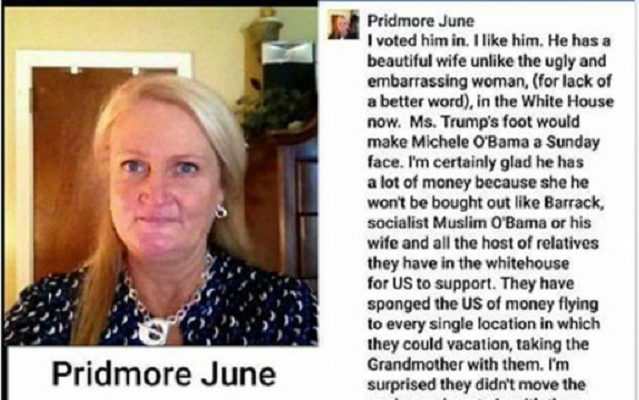 A Regions bank employee in Alabama dared to speak ill of the president and his wife; she’s now looking for a new job.

A Regions Bank senior-level employee who was labeled “Racist of the Week” on social media after posting comments on Facebook derogatory of President Obama and his family, some of which alluded to slavery [?], is no longer with the company, the bank says.

June Pridmore was senior vice president of loan operations since 2008, according to her LinkedIn profile, which has been deleted.

“I voted [Trump] in,” she wrote, in part. “I like him. He has a beautiful wife unlike the ugly and embarrassing woman (for lack of a better word), in the White House now. Ms. Trump’s face would make Michele (sic) O’Bama (sic) a Sunday face.”

“I’m certainly glad [Trump] he has a lot of money because she he (sic) won’t be bought out like Barack (sic), socialist Muslim O’Bama (sic) or his wife or all those host of relatives they have in the whitehouse (sic) for US to support.

“They have sponged the US of money flying to every single location in which they could vacation, taking the Grandmother with them. ….Oh yes, and let us NOT forget they flew the family dog on a SEPARATE plane. If any idiot out there thinks that is justified, you deserved him as president.

“I prefer a man who can buy Michele (sic) and Barack and sell them several times over.” 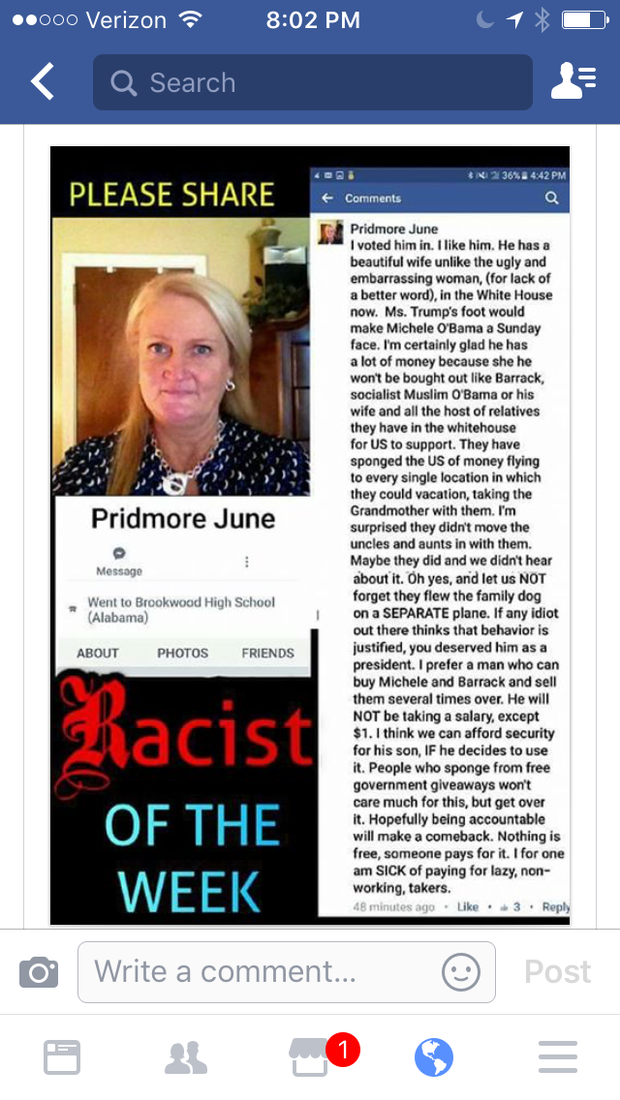 A Regions spokesman trotted out the standard “this does not reflect our values” line in his announcement that Pridmore had been fired.

Regions, headquartered in Birmingham, initially said it launched an investigation and revealed its response today.

Bank spokesperson Jeremy King said: “We appreciate the concerns shared about offensive social media comments that were made through an associate’s personal Facebook account. We want you to know that we share those concerns. Those comments do not reflect our values as a company or the way we do business. The associate is no longer an employee of the company.”

Pridmore’s comments also raised concerns about whether her apparent biases might have influenced any loan approvals. King said the former employee was not in a position where she could approve or deny loans.

I couldn’t find anything that “alluded to slavery,” but then, I’m not trained to hear SJW dog whistles.  Frankly, I’m more appalled by her atrocious spelling and grammar . . . a senior VP?  Really?

I liked the “…woman, (for lack of a better word). LOL! I just hope Ms. Pridmore doesn’t die mysteriously like Joan Rivers did after calling Michelle a tranny.

Anyone who believes in affirmative action is racist. Ms. Pridmore may not be eloquent in her tweets, but her opinion is her opinion. Too bad she is paying such a hefty price, but it may be for the best.

It’s the “I prefer a man who can buy Michele and Barack and sell them several times over” part that they’re probably thinking alludes to slavery. Obviously it doesn’t, that’s a common phrase meaning “is richer than”.

Still, an SVP ought to be able to form and express coherent thoughts.

Ah! I bet you are right. I just remembered Trump saying that he bought politicians as a regular practice and didn’t go any further (because that is clearly what she means). Good call, though. You get the SJW Translator of the Day award!

For this Month’s “Racists of the Week” award I hereby nominate the following:

I wonder what the state of the law is in Alabama. Because when the Grubhub CEO told his employees that if they voted for Trump they weren’t welcome at his company and needed to resign he backtracked very quickly. Because there are jurisdictions in this country where it’s illegal to discriminate against employees for their political affiliations.

There are very few such jurisdictions. California happens to be one of them.

I’d ask “Bank spokesperson Jeremy King” whether anyone who wrote that way about Trump would also be fired.