Says he shouldn’t have “abused his power” with his “joke” 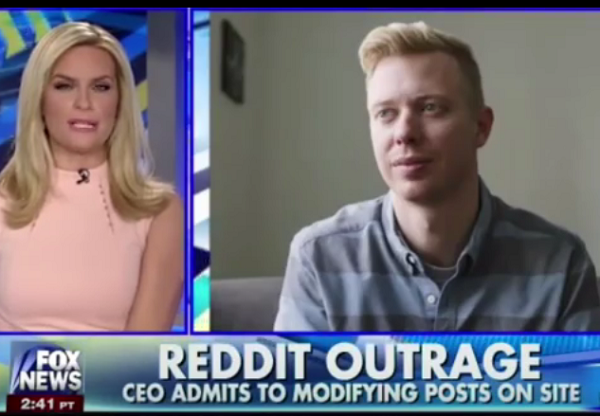 Steve Huffman, co-founder and chief executive of Reddit, admitted to changing the posts of Trump supporters so that it looked like they were attacking the Trump team and not Huffman himself.

Steve Huffman, the chief executive of Reddit, knows he has some explaining to do.

Huffman, also a Reddit co-founder, landed in hot water Wednesday after admitting that he used his administrative powers to secretly edit user comments that were critical of him on r/The_Donald — a popular, pro-Trump forum (or “subreddit”). He swapped all mentions of his own username with the names of the pro-Trump group’s leaders, meaning that expletive-laden posts aimed at him looked instead as if they were insulting the group’s leaders.

It was not a good idea, he told The Washington Post Friday by phone. “I abused my power to give the bullies a hard time,” he said. Huffman thought of his name-swapping as a joke: a way to poke back at the people who’ve been harassing him and some of the site’s volunteer moderators for months.

It was not taken that way.

. . . .  He said he intended to swap the names for just a few hours — even though doing so violates Reddit employee policies — just to give the subreddit’s moderators a taste of what he goes through on a daily basis. Then, he said, he intended to put everything back.

Still, the decision to step in and directly edit user comments was a surprising move from Huffman, who has often said Reddit’s purpose is to provide a place for communities of all stripes to set up their own groups.

One Reddit user who does not support Trump sums up the potential effect of this unprofessional, unethical behavior.

Even Reddit users that don’t support Trump have criticized Huffman. “I can’t stand the thought of Trump entering the White House, but I have to stand up to this,” one commenter said on the site. “It’s wrong and totally unprofessional. It’s going to zap any trust people have with the organization.”

It is you who is the joke, sir.