Be the bigger guy. 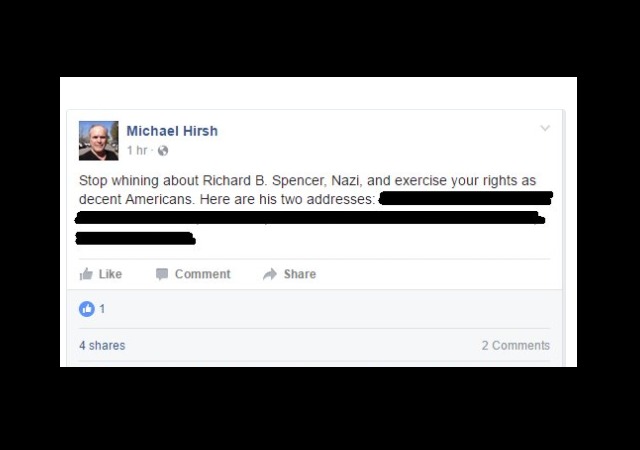 Spencer and his small minded group hold despicable viewpoints, but let’s use our brain here. No one, especially a member of the media, should ever publish a person’s private address. We should never advocate for violence against anyone no matter how disgusting we find them.

‘[I] completely agree we should mobilize against his hateful ideas, but what does knowing his home addresses do?’ Widmann asked. ‘Send a letter? Confront him in person? Seems like counter-speech is the main thing we can do. You can call it ‘whining’ but I’m not sure that’s fair or constructive.’

Hirsh’s response crossed a line that put him on the wrong side of Politico’s management.

‘I wasn’t thinking of a f***ing letter, Doug,’ he wrote. ‘He lives part of the time next door to me … Our grandfathers brought baseball bats to Bund meetings. Want to join me?’

The Bund meetings refer to the “German-American Bund, a Nazi organization in the United States active in the mid-to-late 1930s.” Jewish mobs often attacked the participants at the meetings with baseball bats.

Thing is, Spencer’s group has almost no members. He and his group are only known because the mainstream media has committed to attaching itself only to the most extreme Donald Trump supporters. But this isn’t about Spencer. This about a member of the media crossing the line and lowering himself to the level of these people.

Look, I hate everything Spencer stands for. It’s scary and disgusting. But COME ON. You do not publish anyone’s private address or information because not only are you putting them and their family in harm’s way, but other people around them. How do you know people will not misread the address and attack another house or family?

These people want to cause trouble. More importantly, they crave the attention and unintended promotion of their horrific ideals. These people preach hate and bigotry, aligning themselves with an ideology that murdered millions of innocent people. While Hirsh’s idea won’t lead to that, he is not much better by promoting violence and physical threats.

Politico confirmed the resignation to the Daily Caller News Foundation:

“These posts were clearly outside the bounds of acceptable discourse, and POLITICO editors regard them as a serious lapse of newsroom standards,” Politico Editor-In-Chief John Harris and Editor Carrie Budoff Brown told TheDCNF. “They crossed a line in ways that the publication will not defend, and editors are taking steps to ensure that such a lapse does not occur again.”

USE YOUR BRAIN, MEDIA. You want these people to go away? Stop reporting on them. Stop talking about them. Mostly don’t do something stupid and put citizens in potential danger while you advocate violence against someone.

For christs sake…the media created the power Spencer has by reporting as if he was actually someone! Spencer has no power other than that given to him by the left leaning, HRC leg humping mother f’ing media!

On what planet does anyone who publishes statements like what Hirsh did allowed to resign? This guy SHOULD have been fired…without mercy! You don’t go inciting people to take actions in to their own hands like what he did.

Further more, who the hell is Hirsh to dicide what is right or wrong? Who the hell did he get that “right” from? Who died and made him god???

And the meeeja wonders why America turned their backs on them.

the media created the power Spencer has

Yes, they need foils, and if they don’t have any, they’ll invent some.

They got lazy, and tried to use the Koch Bros. as general-purpose, one-size-fits-all bogeymen for far too long. That seems to have fizzled out. So they need a new straw man.

If anyone harms or even kills Richard Spencer then I think there is a good case that Hirsch is a co-conspirator and liable to prosecution.

Gabrielle Giffords could be an expert witness at the trial.

yes: get her to testify under oath that she & her husband were lying when they tried to blame Sarah Palin for her being attacked by a leftard psycho (but i repeat myself).

then we can prosecute her husband for attempting the straw purchase of a firearm, as well as for the death of a protected sea mammal when his dog killed one on the beach here in #Failifornia.

Sorry, but I doubt that you know anything about him. All you know is what brownshirts like Hirsch want you to know. Or think you know.

There’s a strange phenomenon in Japan; a decade or two ago, a fairly acute observer who’d lived there (albeit only for a few months) described it to me. They take some unknown model and make her The Girl for a year or so. They have her eyelids surgically altered to make her look a bit more like what they think is “Western”, and after that she’s on all the magazine covers, packages, billboards, anything large enough to hold a photo. And then she fades into obscurity, and they do the same with someone else. It’s all entirely, totally, completely artificial.

The difference between Japan and the US is that the Japanese recognize the whole thing as a put-on.

Mary Chastain: Thing is, Spencer’s group has almost no members. He and his group are only known because the mainstream media has committed to attaching itself only to the most extreme Donald Trump supporters.

That is incorrect. Trump’s Chief Strategist tied himself directly to the alt-right.

Steve Bannon was the editor of Breitbart, and said “we are the platform giving voice to the alt-right.” Breitbart identified white nationalist Richard Spencer as the intellectual leader of the alt-right. Spencer said “Our dream is a new society, an ethno state that would be the gathering point for all Europeans. It would be a new society based on very different ideals than, say, the Declaration of Independence.”

Nobody seems to agree on what alt-right means, at least among the various flavors of Trump supporters. It appears that at least two, or more, groups started using that term to describe their own groups, which are very different, and apparently do not want to associate with one another.

Then the media slid in with their agenda to tie all no-longer-democrats to racism and nazism and cats and dogs living together.

Valerie: Nobody seems to agree on what alt-right means

We provided the relevant definition.

If you actually had a definition of “alt-right” beyond “people who disagree with me and my Leftist friends”, you might have a point.

SDN: If you actually had a definition of “alt-right” beyond “people who disagree with me and my Leftist friends”, you might have a point.

We provided the relevant definition.

“We provided the relevant – ”

Ah yes, just like the last election. Every time you people slimed Trump as a racist, I would ask for proof.

“It’s over there somewhere” was the typical response.

Here’s what I don’t get – if you really believe racism sexism homophobia xenophobia is so evil, why do you so casually (and falsely) accuse people of those things?

It’s just a prop to you, you don’t really care about any of it. Else, you wouldn’t be diminishing those terms by lying about racism, sexism, etc so often.

Fen: Every time you people slimed Trump as a racist, I would ask for proof.

And why is it “evil” for whites to organize on racial issues but not so for La Raza or BlackLivesMatter? Or the NAACP? Or the Congressional Black Caucus?

Show me that you have spoken out against these racist outfits and maybe I’ll take your concerns seriously.

Otherwise, I’m going with my usual analysis: you don’t really care about racism, you’re just using it as a prop to bash people you disagree with. And if racism is evil, then so diminishing the charge of racism by using it so casually and selfishly.

Fen: And why is it “evil” for whites to organize on racial issues but not so for La Raza or BlackLivesMatter? Or the NAACP? Or the Congressional Black Caucus?

The history of white racial identity is not very pretty.

In any case, “white” is not a well-defined ethnic identity. On the other hand, non-white ethnicities within American culture have been often defined by their interaction with the broader culture. So while blacks may have many different family and cultural histories, the broader culture treated them as a group, and so they share this history of treatment.

So you admit to being a racist.

Other groups can band together in racial solidarity, but not whites.
What do you have against White people?

Fen: Other groups can band together in racial solidarity, but not whites.

In any case, “white” is not a well-defined ethnic identity.

Cite your source. You can’t.

Everyone should just simply ignore you.

He joined the Trump campaign while taking a leave from his job as executive chairman of Breitbart News, an online operation that Bannon himself has described as “the platform for the alt-right.”
http://www.latimes.com/opinion/topoftheticket/la-na-tt-bannon-door-20161122-story.html

The alt-right is not one group, it’s any group, or person, who wants to call himself that, and Spencer is not Bannon’s leader.

Char Char Binks: The alt-right is not one group, it’s any group, or person, who wants to call himself that,

While not a formal group, there are commonalities. It’s a strategy of the group to avoid accountability through the pretense they are not a group.

Char Char Binks: and Spencer is not Bannon’s leader.

No. But his magazine said Spencer was the intellectual core of the alt-right.

Bannon: “Darkness is good … Dick Cheney. Darth Vader. Satan. That’s power. It only helps us when they get it wrong. When they’re blind to who we are and what we’re doing.”

There have been neo-Nazis here since George Lincoln Rockwell during the 1950s. In the ’30s, the Bund was something new and many of the Jewish attackers were connected with Communist organizations, and that violence was a pale imitation of the massive street battles between factions in Germany during the 1920s and ’30s.

But we have stronger weapons today–social marginalization, probably the main reason why Spencer’s outfit has so few members. By a consensus across races, religions and party lines, the social costs of being a Nazi are too high.

But Hirsh’s problem is something else, which he shares with the snowflakes marching against Trump or claiming some form of post-election PTSD: self-dramatization and the need to engage in external, self-authenticating acts, a variant of virtue signaling, is part of the collective narcissism of the Left.

Class diversitists are projecting fast and furious. They are concerned that Americans have grown intolerant of their institutional racism, sexism, and other acts of selective exclusion. They did the same thing with the white Hispanic and anyone who could be marginally reclassified in one of their diversity schemes.

Throw another baby on the barbie, the Democrats lost, they’re done.

What is Michael Hirsh’s address? He should be subjected to his own rules.

Richard Spencer is a wack job. He’s entitled to believe what he does, and entitled to speak in public about it. Hirsh threatening him with violence, even implicitly, proves he’s just as big a wack job.

Meanwhile, Joseph Goebbels in his corner of Hell smiles.

And those who think that Bannon is the same as Spencer are out of their minds.