Still not ready for peace. 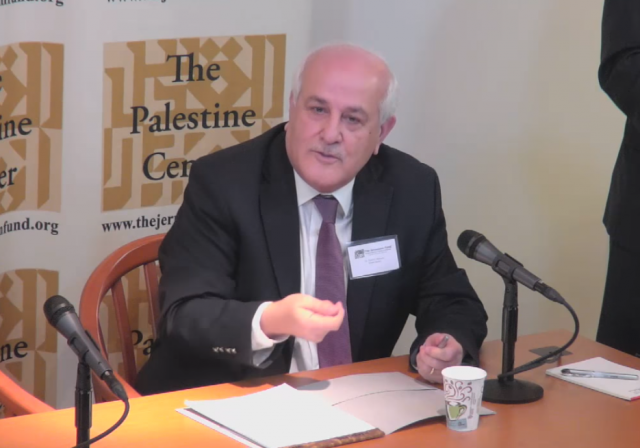 Prof. Miriam Elman had a post earlier today on Donald Trump’s promise to move the U.S. Embassy in Israel to Israel’s capitol, U.S. Embassy: Next Year in Jerusalem?

It’s worth highlighting one piece of news in that post, via Haaretz, Palestinian UN Envoy: If Trump Moves Embassy to Jerusalem We’ll ‘Make His Life Miserable’:

“If people attack us by moving the embassy to Jerusalem, which is a violation of Security Council resolutions, it is a violation of resolution 181 of the UN general assembly that was drafted by the U.S. … it means they are showing belligerency towards us … If they do that nobody should blame us for unleashing all of the weapons that we have in the UN to defend ourselves and we have a lot of weapons in the UN,” Mansour said.

Mansour said that the Palestinian response to a move of the U.S. Embassy to Jerusalem could not be a Security Council resolution because the United States would veto it. “Maybe I can’t have resolutions in the Security Council but I can make their lives miserable everyday with precipitating a veto on my admission as a member state. Italy in 1949 received 3 consecutive vetoes on its admission to the UN from the Soviet Union. These are the kind of things that I can do.”

So let me understand this. Forcing the US to exercise a veto against Palestinian “state”hood would make the US miserable?

Seems to me it would it would precipitate US withdrawal from the UN.

Sounds like somebody is angling for a “Reset” button.

I suspect those days are over.

There is nothing wrong with Gaza that the proper amount of precision ordinance cannot solve.

I was thinking more of M1 Abrams with Dozer blades.

It is time to ‘educate’ these arab interlopers.

if they continue to deny reality, reality will deny their existence.

Dump the UN. Get them the hell off of American soil.

Sounds like a reason to begin the move sooner than expected. Its time to either take back control of the UN, (and don’t delude yourself for many years we did control it), or to tell the UN to find other meeting grounds and stop spending money on them.

I wonder whom the most noxious, insulting, irritating and otherwise objectionable person would be to send to the United Nations. We should find that person and send them, with an explicit command that NOTHING gets done that is not in the interest of the United States First, Israel or Europe second and any opposing country a distant third (if at all).

I’m all for someone in the mold of Khruschev, but with a penchant for searching out and exposing graft, corruption and decadence of the UN Ambassadors and their staff, and not-so-surreptitiously making sure that information makes it back to the public of the nations whom those ambassadors represent.

I prefer someone that would begin laughing anytime the so called Palestinians state, lol, was speaking.

And someone who would make it clear that as far as the US is concerned there is no and never will be a Palestinian State…ever.

Israel should have driven them into the sea 20 years ago, the amount of restraint they have shown is of biblical proportions.

^^^ This guy! That would be hilarious!