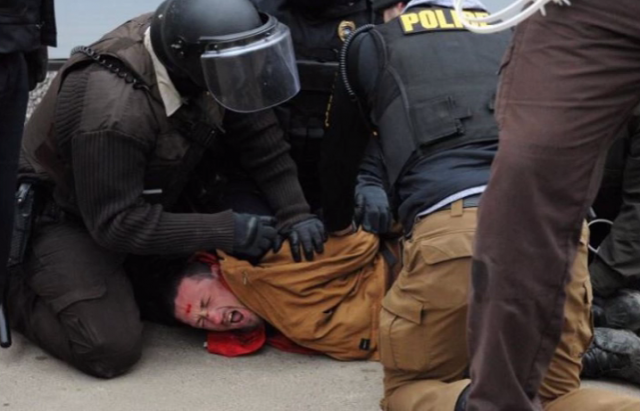 The protest of the Dakota Access Pipeline took another disturbing turn, as demonstrators blocked the entrance of a local mall on Black Friday.

More than 30 activists protesting plans to run an oil pipeline beneath a lake near a North Dakota Indian reservation were arrested on Friday at a retail mall during a rally timed to coincide with the busiest shopping day of the year.

The demonstrators, including members of the Standing Rock Sioux Tribe, walked into the Kirkwood Mall in downtown Bismarck and formed a prayer circle just inside the entrance, defying demands by mall management that they leave the premises.

Police reported that at least 33 people were taken into custody at the mall for trespassing on private property.

Kandi Mossett, an activist with the Indigenous Environmental Network opposed to the Dakota Access Pipeline, said 40 to 50 protesters were arrested. Many were seen being led away in handcuffs to a police van parked outside the mall.

To get a sense of the nature of the demonstrations, here is a video taken by a supporter of the protest movement:

No matter the number arrested, the fact is that these demonstrators infringed on the propety rights of other Americans in their self-righteous, eco-activist fervor.

As Obama and members of his administration seem less than keen on responding to protesters (unless they are Tea Party groups), and because demonstrators are increasingly targeting business in their protest tactics, legislators are looking for other response options.

For example, Washington State Sen. Doug Ericksen has prepared a bill that would create a new crime of “economic terrorism,” which allows felony prosecution of protesters who block streets, cause property damage, threaten jobs and put public safety at risk.

…“I respect the right to protest, but when it endangers people’s lives and property, it goes too far,” Ericksen said in a news release. “Fear, intimidation and vandalism are not a legitimate form of political expression. Those who employ it must be called to account.”

Ericksen said the bill, which is being prepared for next year’s legislative session, would allow felony prosecution “of those who intentionally break the law in an attempt to intimidate or coerce private citizens or the government by obstructing economic activity.”

The key to that legislation is “breaking the law” while demonstrating. Nobody wants to legislate away law-abiding protesters arguing for their candidates and policies. However, during the last few years, many Americans have suffered as agitators have cloaked dangerous and destructive activity under the First Amendment banner.

I was involved in Tea Party protests. Do you know how many were arrested at our events? Zero.

Yes, it is possible to get your message across without impinging upon the rights and freedoms of other people to do so.

Hit them with a night stick until they are no longer active activists.

Just keep them locked up.

If you really, really, really believe that all or most of this planet’s woes are due to humans, especially White European humans, go out in the woods, find a tree you really like, sit down at the drip line and turn yourself into fertilizer.

Your carbon, potassium, calcium, iron and many other elements will be recycled and you will be reborn through your physical chemicals, which you only borrowed in the first place.

Sounds like a political response—mere noise masking a shortage of useful action.

The “solution” is to define a new crime?

I don’t think so. This BS is already illegal.

I’m also not entirely convinced that redefining all crimes as felonies will guarantee a beneficial effect.

Enforce the laws you already have, and if that doesn’t work, get back to us.

The pipeline was rerouted around Bismark into the Res. The Indians have a right to be pissed. But now every little white under grad who wants to cut class can do their superior dance in sympathy down at the mall.

If the Native American tribe is unhappy with the re-routing, fine, I can understand that. There’s a ready solution — give them a fair taste of the pipeline revenue in exchange for allowing the pipeline on their land. That’s a negotiation that occurs frequently when it comes to pipelines. Shouldn’t be hard.

The DAPL doesn’t cross Standing Rock Rez. When the alternate route was proposed, the Corps of Engineers spent nearly two years trying to bring Standing Rock to the table. They ignored requests for meetings and were generally uninterested. That’s why they’ve lost every challenge in federal court… they had their chance and weren’t interested until the activists and the money started flowing their way. They have no right to be pissed off today when they weren’t for the last 2 years.

The route north of Bismarck was rejected by the Army Corps of Engineers as having far more impact on the environment than the final route north of the reservation. I’d have to look up the final assessment, but it was something like 30+ more wetland crossings, more highway crossings, and concerns about impacts on wells near the route.

In other words, it never got to the point where local politics came into play, the ND Public Service Commission.

Not one inch of this pipeline crosses the Indian Reservation!

Follow the money. We need some real investigative journalism.

“We need some real investigative journalism…”

Good luck with that. What we really need is FBI investigation into this: and a prosecution of George Soros for sedition.

There’s a simple solution to this sort of nonsense: make it the law that anyone who is deliberately obstructed while going about his lawful business has the right to go through the obstructer/s with as much force as necessary. If the picket line won’t let you through, drive through anyway. If people are lying on a railroad track, send the train through anyway. If people invade a shooting or bombing range, fire away. By putting themselves in that situation and refusing to leave they consent to any and all damage done to them.

I kept watching that live stream hoping the snowflake herself got arrested.

I have family and friends who live in Bismarck, and we’re there. Interestingly, David Archambeau was seen shopping in the mall shortly before this incident.