Oberlin students on Trump victory: “The world is going to end tomorrow”

Oberlin students on Trump victory: “The world is going to end tomorrow”

“Waves of fear and shock spread across campus” 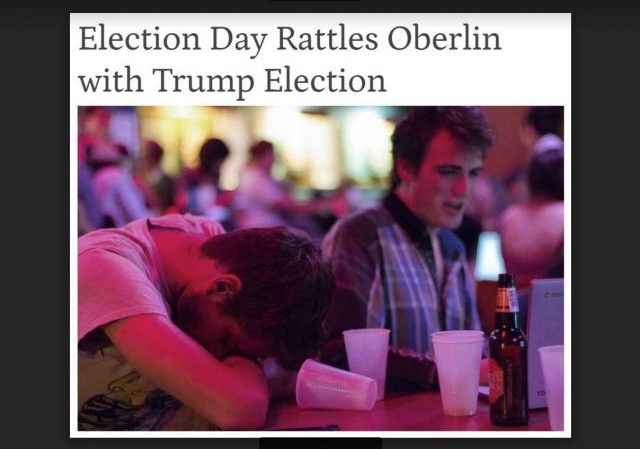 This may partly explain the vicious attempt by Oberlin students to shut down a local bakery after a black student was arrested for shoplifting.

Waves of fear and shock spread across campus Tuesday night as an unlikely reality set in: Donald Trump is going to be America’s next president.

More than 300 students attended the ‘Sco’s election watch party, many of whom sat in tearful silence with head in hands as Trump won every crucial battleground state. Crowds in the ’Sco and Azariah’s mustered occasional cheers when Hillary Clinton took brief leads, but the events eventually ended with students returning home distraught, some loudly commenting, “The world is going to end tomorrow.”

“I couldn’t sleep, and then woke up wondering, ‘Was it all a dream? What will happen to my family?’” College senior Ashley Suarez said Wednesday. “I’m still wondering how so many people, and even people I know, could vote for someone with those sorts of beliefs and language. I have family who are undocumented, friends and Muslim friends who are undocumented, so I worry what this means for them.”

It means that perhaps they should stop breaking the law?

Perhaps turn themselves in and try to get their stuff straightened out would be an excellent start.

It’s about time for American citizens to again take advantage of an atrophied, outmoded concept called Individual Liberty . . . the founding concept of America. Oberlin used to be a rigorous, expensive, liberal arts college, now it’s merely an expensive, PC indoctrination center! Time to re-enact the First Amendment there too, eh? Learn to talk to each other again. As far as “Rule of Law” goes–if I don’t like a given law, I don’t have to follow it either.

Oberlin’s Allen Memorial Art Museum, however, is still the finest art museum in all of Northeast Ohio. IMHO.

This is what comes from individuals in a polity who identify themselves by race, ethnicity, religion and gender and only as Americans as an afterthought .

Isn’t this the same school that is protesting the nearby Bakery for actually prosecuting shoplifters and who beat up a Bakery Employee?