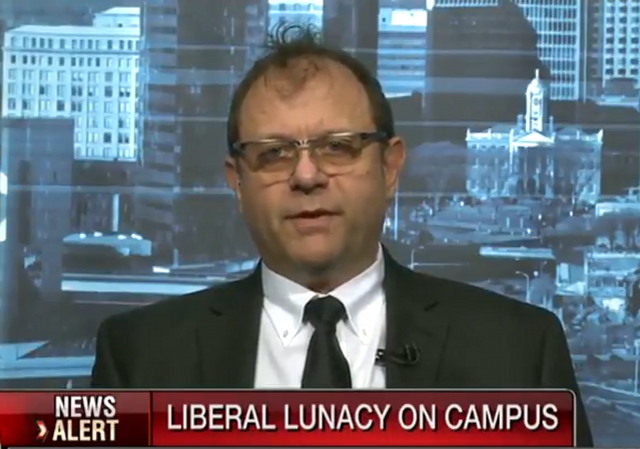 He has now been reinstated and with a raise in pay. FOX News reports:

NYU brings back professor who blasted PC culture, gives him a raise

Liberal studies professor Michael Rectenwald, the man behind the controversial @DeplorableNYUProf account, has been promoted by prestigious New York University and given a raise days after the university had put him on a paid leave for criticizing politically correct culture on campus.

Michael Rectenwald was promoted from clinical professor to full-time professor on Monday, a source said to the NY Post.

The identity politics left: they need a safe space that is at once a hall of mirrors and a rubber room.

In the initial interview with Heat Street on October 26, Rectenwald was outspoken against the current on-campus culture of social justice warriors and safe spaces. He likened academia to a mad house and claimed that “safe spaces” is an existential error.

“This movement is not going to overthrow homophobia, transphobia, racism, or sexism. In fact, it works the other way and it will constantly cause people to be resentful and probably even foster the very attitude it opposes,” he told Heat Street.

Professor Rectenwald recently spoke with Stuart Varney of the FOX Business Network. This was before he was reinstated but it’s a fascinating conversation.

When Varney asks where this PC culture on campuses came from, Rectenwald suggests that it was born in Women’s Studies and LGBT Studies departments but has permeated through everything.

Here are a few more choice tweets from Rectenwald’s account:

Identity politics has, to borrow from Nietzsche, “made an infirmary of the whole world.” @nyuniversity

Liberalism coopts the discourse and techniques of radicalism and turns them into devices of mass manipulation.

A promotion and a pay raise. Hmmm. Do I smell the remnants of a smoking hot letter of intent to sue in the air? Good for you, professor.

My first thought as well.

While I don’t expect the leftist PC academia to cease its march to utopia, perhaps a Trump presidency will seriously slow down the process…

There is only so much government can do, besides set a “tone.” Just like Obama’s admin did, Trump could use “suggestions” under Title IX as one mechanism.

My hope is that the new administration, and mostly what it symbolizes – “we’re mad and not going to take it anymore” thanks to the film Network – will give some cover to donors who have been fearful to speak their minds. That could mean they will feel less risk in verbal responses or even financial ones. Once schools begin to suffer that way, things will become more balanced, I think.

So far, repercussions have been minimal. Most thanks to the mob.

1. Parents: Stop sending your children and your money to these indoctrination camps.

2. Alumni: Stop sending your donations to these indoctrination camps.

3. Others: Pass on these suggestions to your friends and neighbors.

Don’t wait for politicians to fix it for you.

What makes him more interesting to me is that he is far from being a conservative or an ideologue along those lines at all. His field of study included secularism and his work has appeared in Marxist/Communist outlets.

He just perhaps ins’t a totalitarian like progressives have become.

Let’s call it like it is. Political correctness in any form is a feature and primary tool of totalitarianism. It’s one of the main ways totalitarian states keep their populations under their thumb, through peer pressure from “comrades.”

Excuse me, but what makes NYU prestigious?

It is easy to spell and it is less expensive for the Chinese overlords to have their slave labor factories produce.