Will appeal the decision 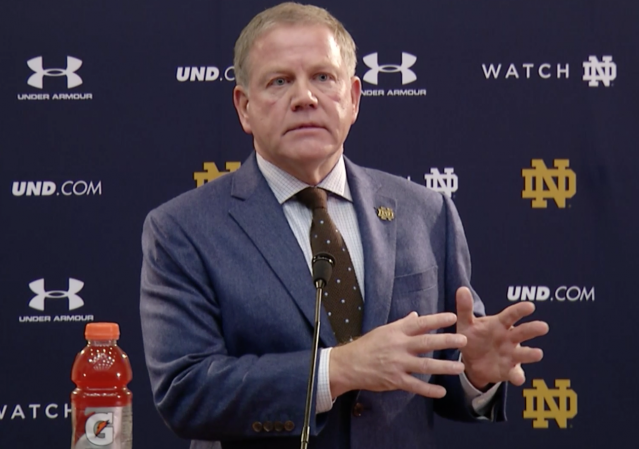 The NCAA placed Notre Dame on academic probation for a scandal concerning an athletic trainer and a student.

The university self-reported the potential violations and kept five players off the field before the 2014 season.

In addition to a year’s probation, the university was reprimanded and censured.

Every win from the 2012 and 2013 seasons will be vacated. In 2012, Notre Dame won 12 games and lost to Alabama in the BCS National Championship game.

The student trainer has been disassociated from the program.

Kelly announced plans to appeal the NCAA’s decision, requiring the team to forfeit their wins:

“It’s never happened before in the history of the NCAA. The penalty has never been issued in this fashion before,” Kelly said. “I think that qualifies for being, first of all, it was discretionary. This is a discretionary action by the committee. That’s No. 1. No. 2, student-on-student cheating, nobody implicated. The NCAA agreed across the board with that finding, and it was clearly excessive, so we’re gonna appeal this, and one of the options or clear reasons for appeal is that the penalty is excessive in its discretion and we believe we have obvious grounds there.”

Kelly said he bears no culpability for the academic misconduct that occurred under his watch. He said he plans on being back in 2017 for an eighth season, saying criticism from this 4-7 season stems from the Fighting Irish’s lack of success and is independent of this NCAA situation.

“A young Irish football player goes into confessional…”Father, forgive me as I have sinned…”

Padre, who kept track of penance via chalk marks on his sleeves, “Please expound…”

Football player, “I have kicked a man down, gouged eyes, and hit others blindly…”

Padre, while the chalk was flying, “And who were you playing?”

Padre, while wiping his sleeves of the many chalk marks, “boys will be boys…”

Is that just a Catholic vs Protestant joke? Maybe I’m too much of a college football fan to see through to the humor.

I like your handle. Did you also own a Hodaka Combat Wombat back in the day?

What a way to disincentivize schools from self reporting…

Is this the University of Notre Dame, the “in the Catholic Tradition” university in South Bend, Indiana? The one that gave President Barack Hussein “Abortion-is-Good” Obama an honorary doctorate in 2009? The one that gave domestic partner benefits before there were required by law? That Notre Dame?

I’m having a hard time being sympathetic.

Dang, that was a little harsh. Milwaukee: y’all don’t need to be a hater. The pressure to succeed in big time collegiate sports must be huge, really huge. We have evolved into an out-of-whack system. New rules are patches on a system which needs major revision. For example, why not make players employees, and offer free tuition as a benefit?

By the way, before Common Core, we had, and still have, a national curriculum clearinghouse. The NCAA keeps track of every class taught in every high school in the country. Athletes must take a certain number of college preparation courses, with a certain GPA. The NCAA evaluates all courses and determines whether or not the course counts as college prep worthy.

Or maybe, they should be actual students.

If the student employees receive “free” tuition, medical, extra tutoring and room/board, then those employee benefits are taxable in the year received.
It would take a wage likely far above minimum to cover the taxes alone, and if (when) the IRS decides championships/awards increase future earnings value….
….that is not a diploma which are not treated as taxable value. A player might be required to pay on that current value of future earnings and depreciate the amortized valuation later.

It does sound harsh for the crime, and I am not a ND fan.

Yeah. Without knowing the details I have to agree with the coach right now. It was a violation between a few students without any involvement from the school. And once they discovered it, they reported it.

Perhaps there is more to the story than what is known publicly.

So…. they won, but they didn’t win?
Them boys know who won.

I wonder what the ND team would look like if the players were actual students?

Same thing happened to my alma mater and it’s a bit ridiculous. There’s no such thing as a no-win game when two teams play.

You want to talk scholarship reductions…maybe, if the school was involved. Vacation of wins is probably the most unpopular punishment among the schools (that and bowl bans).

I don’t expect this to be a popular opinion, but here goes.

Al Davis broke my heart moving the Raiders to LA.

When I got over it I wouldn’t give pro sports the time of day. Shortly thereafter I got over college sports. If I’m not in the game, I don’t care.

I used to play rugby. Given my current gimpiness I played it far too long. Now I spend my fall weekends hunting.

Understand perfectly Arminius.
I thank the Detroit Lions every fall hunting season. Worst “pro” football team since mid last century.
I usually find out, accidentally, the score the next day. But I never worry how they’re doing while hunting. They killed my interest in football long ago. And I was a big sports fan as a kid to my mid 20’s.

It didn’t help, or hurt, you be the judge. But for nearly a decade I was stationed overseas. So I had to get up at something like 4:00 a.m. if I wanted to watch Monday Night Football.

I just couldn’t find the time. I would however make the time to make a special trip to Anchorage and hunt Caribou or Blacktail.

I was nuts for the Raiders. Jim Otto, George Blanda, Kezar stadium, you name it.

Then Al Davis taught me it’s all just a business.

I have happily hunted every fall weekend I could ever since, confident I wasn’t missing a thing.

What’s with the sports drink? “This reprimand brought to you by Gatorade.” That’s just asinine.

With all the corruption in modern sports, Gatorade has found a new marketing target.

“Gatorade: For when legal trouble really has you sweating.”

Word to the wise.

Fish will explode at high altitude. Crabs will not. Maybe this is not info our Jewish friends can use. But I learned it from a cross country flight from Maryland to Sandy Eggo.

Also the troops will hate you because someone will have to clean up the mess. And that someone maintains your ejection seat. And you don’t want that kind of trouble

I don’t know much about Jewish dietary laws, but I am under the impression crabs are bad.

Miss Molly. I don’t want to say anything to denigrate my former service, but dammit.

I think it peaked a couple of decades back.

“No. 2, student-on-student cheating, nobody implicated. “

Coach: some of the “students” involved were football players from your team. Did they receive rudimentary instruction as to constitutes acceptable help and what does not? Were they told that this type of behavior qualifies as cheating and would have disciplinary consequences? If the answers are “Yes.”, then it happened on your watch. Remember when Ohio State was penalized because players traded their championship souvenirs for tattoos? Same thing. Just because this action didn’t originate following orders from you doesn’t mean your team escapes the consequences.