Outside review by 15 former prosecutors unanimously concludes shooting was lawful 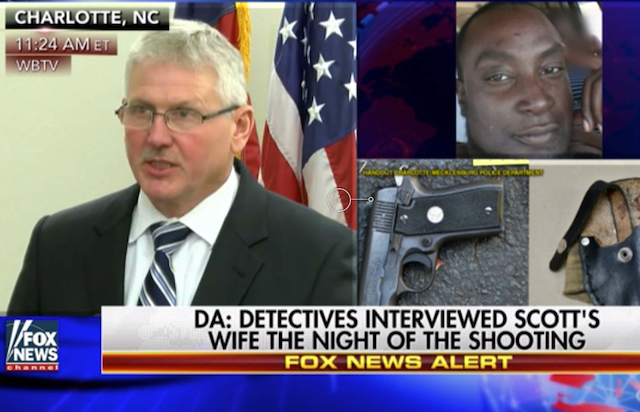 No charges are to be filed against the police officer who shot and killed Keith Lamont Scott last September in Charlotte NC, announced Mecklenburg County District Attorney Andrew Murray today, reports CNN and other news outlets.

Both Scott and the officer who shot him, Charlotte-Mecklenburg police Officer Brentley Vinson, are black.

As has long since become the common pattern in police shootings of black male suspects, considerable early effort was put into creating a false narrative that was negative to the police. For example, Scott’s spouse claimed that he was not armed at the time police shot him. In fact, a gun extensively covered in Scott’s DNA was found at the scene beside his body. As another example, Scott’s daughter claimed that her father was merely reading a book when police shot him. In fact, no book was found at the scene.

Similarly, a Scott family attorney, Justin Bamberg, is quoted today by CNN as stating that “it’s safe to say he did have a gun on his person” but nevertheless claims that there was no proof that he had the gun in his hand. In fact, officers can be heard on dash cam video calling repeatedly for Scott to “drop the gun” repeatedly before the shots that would kill Scott are fired.

In making his press statement today that no charges would be filed, District Attorney Murray went to considerable effort to detail the evidence and circumstances that were taken into consideration in arriving at that decision. He also noted that his office requested reviews of the evidence by 15 additional former professional prosecutors, and that they unanimously agreed that Officer Vinson acted lawfully and that no charges against him were warranted.

He went on to note that:

The central issue here is whether Officer Vinson was lawful in using deadly force against Mr. Scott. Anyone is justified in using deadly force if he reasonably believed an in fact believed, that he or someone else was in imminent danger of great bodily injury or death. We cannot know what Mr. Scott’s intentions or reasoning were that day, and Officer Vinson could not know that at the time. What he saw was a man who had drawn a gun when confronted by police, exited a vehicle with the gun in his hand, and failed to comply with officers who commanded him at least 10 times to put the gun down.

DA Murray then goes on to discuss issues such as an officer’s reaction time to an imminent threat, and other facts, some of which are covered in the video embedded below. (In all, the press conference took about 30 minutes, but as yet we have only bits and pieces of the statement in video form from news outlets.)

The District Attorney naturally urged that people confused or angered by this decision should read the entire 22-pages of the DA’s report, which will presumably be released to the public for this purpose. He also urged that people not react emotionally, and certainly not engage in violence.

Andrew F. Branca is an attorney and the author of The Law of Self Defense, 3rd Edition.

Two knees will give him creds with the LGBT community that is the very foundation of football viewers.

I’d like to give Colin one of my knees. Right to the nuts.

…. He also noted that his office requested reviews of the evidence by 15 additional former professional prosecutors, and that they unanimously agreed that Officer Vinson acted lawfully and that no charges against him were warranted.

Translation : no one was able to find anything to hang him on.

Good for the DA. Full CYA performed and took the legs out from under the BLM’s kill-the-cops-for-justice theme.

Good luck, Charlotte. They will need it.

Thanks for the update, Mr Branca

What’s going on with the Slager trial?

Michael Slager testified in his defense, the defense rested. BTW he testified that he had been tased.

He said he’d been tased? A quick look at NPR, ABC, and the Charlotte Post and Courier shows no mention of that. It seems like an important detail.

Slager took the stand in his own defense, which isn’t a good sign generally speaking.

I checked the reports as well and I don’t find that he got tased either.

Also from what I have read his testimony probably hurt him more than helped.

It’s at this point that Slager claims Scott was able to wrestle the Taser from his hands and use the weapon against him. Later, during cross examination by Deputy Solicitor Bruce DuRant, Slager was unable to explain why he neglected to tell other officers who responded to the scene that Scott had used the Taser. While Slager had stated that Scott was able to take control of the Taser when he radioed dispatch after the shooting, it was not until speaking with SLED investigators three days later that he mentioned being tased. Charles Morgan, a forensic psychiatrist, would later testify that the gaps in Slager’s story could be attributed to the effect of stress on his ability to accurately recall exactly what took place.

So it seems confusing…

The beginning of the NYT article:
The defendant, one of the most vilified police officers in recent American history, stood alone before a judge on Tuesday and made a simple declaration: He would testify in his own defense against the accusation that he had murdered an unarmed black man.

This seems pretty slanted to me… the whole article did, but consider the source.

I was hoping that there would be a thread here discussing the whole case… but nope.

My take is that if Scott had the taser then he was not unarmed. So much hinges on that. Personally, I hope the jury lets him walk, but I just heard that the judge instructed them to consider a manslaughter charge, since it was obvious that(no one proved) there was no “malice aforethought.”

The main problem Slager has is the video of him dropping his taser by Scott after the shooting.
The prosecution made a pretty big deal about how he staged the scene and I think it will have a profound effect on the jury.

Honestly, this was a bad shoot and the guy should be fired for sure.
Not sure I could put him in prison for decades for shooting a fleeing felon who just fought with him and tried (or pehaps actually did) taze him. I am glad I am not on the jury for this one.

The video was dmning to be sure…BTW hung jury now… I am really sorry this didn’t seem important enough for a thread.

Great work by the DA, great news for the cop, and as always a great explanation and rundown by Andrew.

This one is a no-brainer. Unfortunately, so is the typical SJW.

Hasn’t anyone investigated whether the book that was claimed to have been present was illegally picked up by a cop, then kept to be later used as a ‘throw-down book’ at another crime scene?

No, I don’t believe there was a book present either.

Verrrry appropriately phrasing (although it was probably a “typographical error”).

The shooter appears to be the aggressor but claims self defense. Even waited for the police to show up. I am pretty sure he thought it was self defense. Trial started 12/5/2016.

After a bit of research I don’t think this guy has much of a chance, especially since he shot smith 8 times and 7 of those were in the back. Also, it looks bad that he was pursuing Smith.