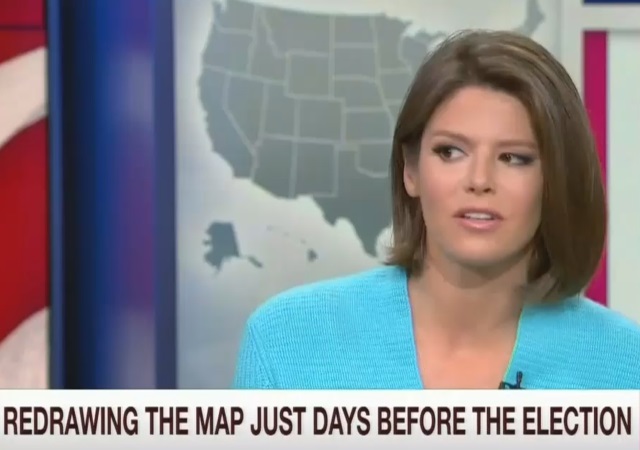 As MSNBC reporters go, Kasie Hunt is among the more even-handed. Even so, no one would confuse her for a covert Trump fan. So it was remarkable that on today’s Morning Joe, Hunt offered up this personal observation born out of her being out on the Clinton campaign trail: “the events that Hillary Clinton is holding in these swing states, they don’t feel like a winning campaign in the final week.” Yikes!

Hunt contrasted the “relatively small, relatively excited” crowds at Hillary events with the “screaming crowds of people” at recent Obama rallies, where “the vibe is just entirely different.” Concluded Hunt: “you can feel on the ground that enthusiasm problem.”

Joe Scarborough was quick to argue out that crowd enthusiasm is not a reliable election barometer. He told of being out on the trail in 2012, where Romney crowds were wildly enthusiastic while Obama crowds were more subdued, and yet Obama of course handily won re-election.

Note: earlier in the show, Donny Deutsch, speaking of Trump, said he was “scared,” because “there’s a 50/50 chance this lunatic could be our next president.” Scarborough facetiously asked why Donny was calling Hillary a lunatic. Deutsch explained his fears by saying that in recent days, the Comey factor has dialed distrust of Hillary up, while a more reserved Trump has caused his “dangerous” factor to dial down.

My apologies to viewers for the imperfect Deutsch video. Problem with the feed this morning.

KASIE HUNT: I have to tell you, just being out on the road. This is anecdotal You can’t necessarily make assumptions about the whole map because of this. But the events that Hillary Clinton is holding in some of these swing states, they don’t feel like a winning campaign in the final week. They’re relatively small events. People are relatively excited but when you go cover the president, you show up, there are screaming crowds of people. The vibe is just entirely different. We really are in this grind it out phase. You can feel on the ground that enthusiasm problem.

JOE SCARBOROUGH: Why are you scared, Donny?

DONNY DEUTSCH: I’m scared because there’s a 50/50 chance this lunatic could be our next president.

JOE: [facetiously] Why are you calling Hillary Clinton a lunatic? What’s happened to you? What’s going on? She’s a wonderful, she’s a great —

DONNY: It’s really simple what’s happening. It’s not too complicated. It’s basically, this election has always been a dial test between, okay, on the one hand we have an unlikable, untrustworthy, bureaucratic status quo. And on the other hand we have a very potentially dangerous, potentially misogynistic, potentially hate-mongering. And the dials go up and down.

The real lunatics want to keep running the asylum.

Ergo, their moto — I’m with Her

By the way, I think I found the perfect theme song for Athony Weiner too.

The difference between 2012 and now is there was enthusiasm Obama also and Romney was only drawing crowds the last week. Trump has had big crowd the whole time and there’s been no crowds for Hillary the whole time either

Joe Scarborough said “Romney crowds were wildly enthusiastic”. Um, no. Just no. That’s a joke. I attended a Romney/Ryan rally in Sept 2012. There were about 300 people there who seemed to be just doing their duty. We tried to be enthusiastic but our hearts just weren’t in it. I would describe the experience as dry and boring.

“He told of being out on the trail in 2012, where Romney crowds were wildly enthusiastic while Obama crowds were more subdued, and yet Obama of course handily won re-election.”

Why did he say this? We can still remember story after story of women fainting in the crowds at Obama rallies.

I’m putting Joe Scarborough on Glenn Beck watch. Why is he even lending his name to a propaganda outfit like MSNBC?

I was just thinking the other day how not a single person has fainted during this election season. Obama: the great orchestrator (sp.?) of b.s.

Donny, even more scary is that there is a 50/50 chance that Hillary could be the next president.