How dare Trump put himself in the same league as Lincoln, MLK, JFK, RFK and Reagan? 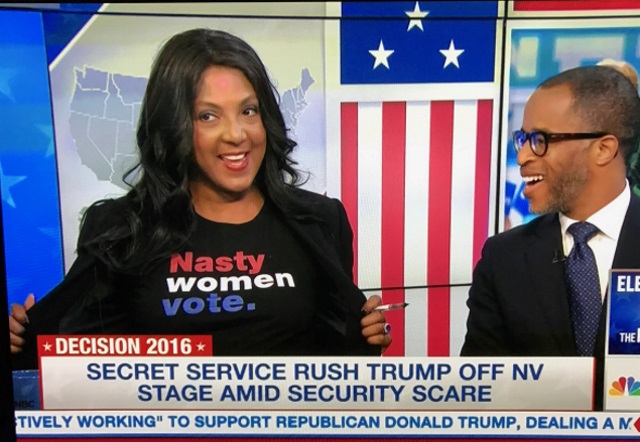 In one of the more absurd statements of this absurd political season, Michelle Bernard, a guest on Joy Reid’s MSNBC show this morning, said it was “hubris” for Donald Trump to imagine that he was “akin” to American leaders who have been the target of assassination attempts such as Lincoln, MLK, JFK, RFK and Reagan.

How illogical can Bernard be? Whether or not Trump belongs in the political pantheon she described, can she actually believe that he could not possibly be the target of a madman? And what of others she didn’t name who were the object of assassination attempts, such as McKinley, Garfield and Gerald Ford? Would it also have been “hubris” for them to have been concerned?

Reid seconded Bernard’s absurdity, saying that “a lot of Republicans would look at that list and just wince.” We’re wincing all right, but not for the reasons Reid and Bernard have in mind.

Note: Bernard’s comments came in the context of the incident yesterday in which Secret Service agents rushed Trump off the stage at a campaign rally in Reno, Nevada. There is no evidence that Trump was actually the target of an assassination attempt at that time, and no charges were filed against the individual involved.

Note Segundo: Bernard has “evolved” from being a member of the Bush-Cheney Presidential Inaugural Committee and former president of the centrist Independent Women’s Forum to now being an avid Hillary fan. At the beginning of the show, she pulled back her jacket to reveal the “Nasty Women Vote” t-shirt underneath.

MICHELLE BERNARD: Just the hubris, if we think about assassinations in our country and assassination attempts, is Donald Trump telling us that he is somehow akin to Martin Luther King, John F. Kennedy, Robert F. Kennedy, Abraham Lincoln, Ronald Reagan? I mean, really.

JOY REID: Yeah. I think even a lot of Republicans would take a look at that list and just wince, because that is what’s happening.

One doesn’t need to be great to be a target of assassination.
What this yenta thinks is not too terribly interesting. Far more important is that Trump’s son and media director are still promoting the lie that Trump was a target. But lying media.

I unintentionally gave a ‘thumbs-down’ to your comment: sorry.

Trump opposes the status quo and its progress. As an apostate of the Church, with insider knowledge of its function and organization, he is a threat to the State-established Pro-Choice Church and Party that is selective and opportunistic, unprincipled and vindictive.

MLK would be branded as “deplorable” today. He may also have recognized intrinsic value as a moral principle, and evolution from conception as a scientific fact. He would be labeled as anti-abortion, anti-choice, anti-female chauvinist, or as a heretic and cannibalized/Planned in a baby trial.

I wonder if Wolf Blitzer will acknowledge the truth of who Austin is since he is on the committee to protect freedom of speech.

legacyrepublican: I wonder if Wolf Blitzer will acknowledge the truth of who Austin is since he is on the committee to protect freedom of speech.

Huh? He was holding a Republicans for Hillary sign, so it’s not a secret. The crowd started to beat him up, then someone shouted “gun”, and the Secret Service responded to protect the candidate — as they should.

Wolf Blitzer is the one who complained about reporters being called out by Trump to Kellyanne Conway saying that Trump was putting them in danger.

So, I am wondering if Wolf turn the mirror on himself and will honestly report Austin Crites as the fruit of overwhelming evidence that the media has been collaborating with the Hillary campaign in rewarding violence against Trump.

legacyrepublican: So, I am wondering if Wolf turn the mirror on himself and will honestly report Austin Crites as the fruit of overwhelming evidence that the media has been collaborating with the Hillary campaign in rewarding violence against Trump.

Huh? He was apparently a peaceful protester that got beat up by the crowd. Look at the difference with Obama.

At first, attendees ignored the president’s calls to stop heckling the demonstrator. “Hey everybody, listen up!” Obama said, trying to regain control of the crowd. “I told you to be focused and you’re not focused right now. Hold up. Everybody be quiet for a second!”

“You’ve got an older gentleman who is supporting his candidate,” he explained. “He’s not doing nothing, you don’t have to worry about him. You don’t have to worry about him. This is what I mean about not being focused. First of all, we live in a country that respects free speech. Second of all, it looks maybe like he maybe served in our military and we gotta respect that. Third of all, he was elderly and we gotta respect our elders.

And then the famous Obama rejoinder: “Fourth of all, don’t boo. Vote!”

Most likely it would depend own whose freedom of speech needs protecting.

And what if he is a Hillary supporter? It’s still a free country.

It’s actually odd. I’d expect that somebody is trying to assassinate Trump. Perhaps there have been foiled attempts we’re not being told about. In any case, the very rich people who have invested very big money into seeing that Hillary is put on the throne are going to have to take “no” for an answer … and they won’t like it.

As the Wicked Witch said, “… But that’s not what’s worrying me—it’s how to do it. These things must be done del-icately …”

I imagine some “problem” with his plane would do the job. On the other hand, a gun would be yet another opportunity for a push for further gun control. Never let a good crisis go to waste ….

There was an attempt earlier this summer by an English man, who tried to grab a cop’s gun to shoot him. Don’t remember his name.

Also, TheGatewayPundit has this article – – -with images! — showing some facts I hope law enforcement follows up on – I hope someone makes the appropriate complaint:

Reminds me of the movie In the Line of Fire when Booth pops a balloon just to cause a reaction from the Secret Service.

Just another dirty trick by a Dem operator. Let’s hope they stop there.

Imagine if they ran your lives? Now imagine Obama for another 4 years.

I’ll be glad when 2017 gets here and Trump is sworn in and the Clinton’s are living in the Ecuadorian embassy in London to keep from going to the pen.

it was the secret service and not trump who made the determination that there was a possible danger to his safety.

Here it is: Michael Sanford tried to kill Trump.

You forgot Hitler, Trotsky and Caligula .

C’mon, people. Hillary herself was targeted for assassination by snipers.