Conway Claims Criticism of her ‘Sexist,’ Says She Can Have ‘Any Job She Wants’ 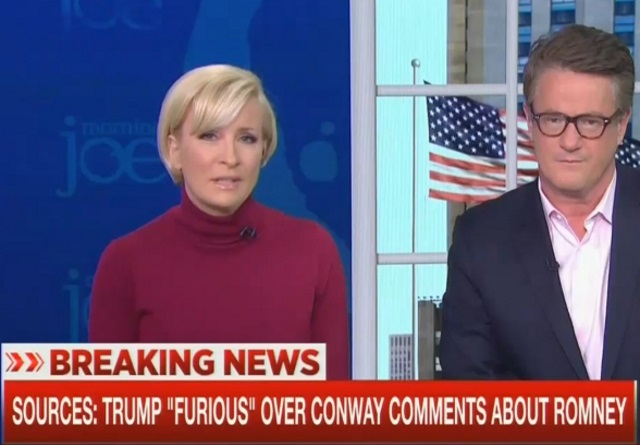 When I suggested yesterday that Kellyanne Conway was being “less than loyal” to Donald Trump by sharply criticizing Mitt Romney on the Sunday shows, some readers took issue, surmising that Trump himself had encouraged Conway’s attacks.

But today’s Morning Joe reported as Breaking News that two sources at the top of the transition say that Trump is “furious” at Conway for her comments, notably her suggestion that Trump had “betrayed” his supporters by considering Romney for Secretary of State. The sources described Conway as having gone “rogue.” Scarborough read a response from Conway in which she called the comments “sexist” and claimed she could have “any job she wants” in the Trump administration.

Scarborough wondered whether Conway was accusing the top members of the Trump transition of being sexist, since that is the source of the comments that Joe and Mika reported.

Morning Joe played a clip of Conway from yesterday’s Meet the Press.

CHUCK TODD: Let me ask you this. Why are you campaigning against Mitt Romney as Secretary of State?

KELLYANNE CONWAY: I’m not campaigning against anyone. I’m just a concerned citizen. I’m not campaigning against Mitt Romney. I felt compelled to mention it because it’s just breathtaking, in scope and intensity, the type of messages I’ve received from all over the country. The number of people who feel betrayed to think that a Governor Romney would get the most prominent cabinet post after he went so far out of his way to hurt Donald Trump. There was the never Trump movement and then there was Mitt Romney.

MIKA BRZEZINSKI: Two sources at the top of the Trump transition people confirm they spoke to the President-elect —

MIKA: — and that Donald Trump was, quote, furious at Kellyanne Conway’s comments on Sunday suggesting that Trump “betrayed” his supporters by even considering Mitt Romney for a position in his cabinet. “Kellyanne went rogue at Donald Trump’s expense at the worst possible time,” a source familiar with Trump’s thinking said. Trump’s top aides said they were, quote, baffled by Conway’s comments and suggested that it feeds into a growing concern inside the campaign that “instead of driving Donald Trump’s message, she’s pushing her own agenda.” One top transition aide said “it’s dangerous.” Steve Bannon and Reince Priebus have reportedly been growing frustrated by Conway’s failure to become a team player in a transition process where the top players are forming a tight-knit group around the President-elect.

JOE: And, we have a response from Kellyanne Conway, who says about our reporting this morning, it is sexist. She says she can have any job she wants.

I’ll start giving more than a “nice lie to damage the Trump
transition” response when MSLSD (which has been KNOWN TO LIE) names names, rather than quotes “top sources.”

Odss are the “top sources” are friends of Romney being promised jobs in State when he becomes SoS. I think so far Trump has shown that he picks people who can keep their mouth shut.

I smile that MSNBC is using the phrase “Going Rogue”, the title of Sarah Palin’s book.

I can’t find that phrase anywhere.

You are, apparently. You won’t find the term “going rogue” uttered by any bsNBC person.

You need to sober up and learn to read, pard.

Maybe you should listen to the clip. Mika clearly states, quoting one of those “sources”: “KellyAnne went rogue…”.

Which is NOT “going rogue”, you MOW-ROWN

For someone with a continuous sore ass, you sure do call everyone butt hurt a lot.

You lost Raghead. As anyone with half a brain knew all along you would. Go away.

Mika and Joe stirring the pot. I was surprised to read that Conway was being considered only for the Press Secretary position. I would think the winning campaign manager would be in line for a better position.

DaTechGuy’s JD Rucker has three theories on what is going on.

Who gave Conway the green light to do this?

I’m not maming names, but I’ll give you his initials as a hint: PRESIDENT ELECT DONALD JOHN TRUMP

Well, if Morning Joe says so….

Anybody else notice the difference between

“….type of messages I’ve received from all over the country. The number of people who feel betrayed….”

I have seen the commentary, too. It is boisterous, and very much as she described.

That does not affect my own assessment of Mitt Romney as SoS. The Department of State has been abused by two successive Secretaries who have reportedly enriched their children by way of State Department contracts, as well as the President by purchasing very large numbers of his books. One of them enriched Friends of Bill at the expense of Haitians. Word is that the accounting, among other things, is a mess.

Mitt Romney is an efficient administrator who knows what budgets and accountants are for. He has a skill set and experience that is directly applicable to an abused agency. I have no doubt that Mr. Trump is perfectly capable of setting the parameters of that job in a way that would make the relationship workable, assuming Mr. Romney accepts them.

I do not excuse or forgive Mr. Romney for the way he treated Newt Gingrich and Donald Trump during their respective election campaigns. His lack of political acumen was painfully on display, a deficit that can be remedied through adequate counsel and supervision.

If it takes very much effort to convince Romney to bury his animosities and put the country first, we’re all better off if he just stays home.

Valerie, I don’t believe anyone would pass along those kind of comments unless they wanted to hurt Romney with them.

It reminds me of when a politician talks about what people back in his district are saying. Surprise: it always echoes their point of view!

“Mitt Romney is an efficient administrator…”

Mittens is no wartime consigliere.

We’d be better off with Mittenns at the Commerce Department.

Better yet, we’d be better off with Mittens absent from the administration altogether.

I remember this guy from the first year of the apprentice who actually went around with a suitcase filled with a million dollars.

He kept offering it to Trump to hire him for a year. He figured he would learn enough to make it up easily.

I’m kind of watching this with alertness. I think I will learn much.

Romney’s lust is just so obvious, and his full court press. What is more he seems to be coming across as Amarosa (??? ).

I remember a quote from a book, the quote was about an agent provocateur who was a really loose screw. The person thinking it believed that the head of the agency had someone in the organization
with the right screwdriver. Hope the same thing applies to Trump wrt Romney.

I think one thing Joe and Blond Bimbo don’t get.
With Trump it is not the same game as usual.

I’m not saying Trump is a super genious but one thing that is becoming clear, is that he looks at people differently. It is almost as if he sees them from a perspective of the ir failing, how they match the seven deadly sins. Jeb, sloth. Cruz, pride. Hillary, greed. Romney, lust. and he manages to expose these weaknesses for everyone to see.

Ah yes… “sources” again. We know how reliable those are.

Since the conversations have been “private” and the summaries mention only the general topics, we do not know if Romney apologized in private and if the two agreed to work together.

I hope Trump does not continue the many “czar” positions, but one I would like to see Romney accept is the task of breaking up some of the bureaucracies that we have. People have been tasked to come up with solutions for a specific problem(Gore and Biden), but nothing seems to come to pass.

This task would pit the cabinet members against Romney, especially if consolidation or elimination of duplicate tasks is proposed. But, if it works, then America is only better for it. If it doesn’t, then Trump blames Romney who fades away.

Re Conway saying she could have any job she wanted…. to most people, that bragging would only mean that you would not get any position.

I’ve been looking for a disclaimer from Bannon, T-rump, or Priebus, who’ve all be awake for hours.

That’ll be the acid test.

We’re really going to entertain the notion that Morning Joe is a RELIABLE source????

I love humor in the morning.

Me, too! Also the smell of napalm in the morning.

In the world of the main stream media, Trump is like Barry Sanders. He gives them a head fake and whoosh he’s off in another direction. They can make things up or just guess, but they don’t actually know any more than he’s wants them to know.

It would be interesting to know if Trump invites some of these people in and then just asked for their opinions on specific issues and then asked who would you recommend for the job.

I think it is funny watching the MSM try to figure out who is going to be in each position.

What is funny is the position in which Trump has the media.

Of course, the original report came from the WaPo, so some of you idiots won’t be able to believe it. Right, Mac?

Coming from the WP it is certainly suspect. And it should be.

They occasionally produce actual news that is not an outright lie.

One would have to be an “idiot” to take anything from the WP at face value. Are you one of those?

How many times have I written you should always look under the hood, Lyin’ Berri?

I don’t take anything at “face value” from any source, including T-rumpbart and Dirge.

I also check into truthful reports from any source.

“I don’t take anything at “face value” from any source,…”

I’m of the opinion you do so long as it is derogatory trump news. Your comments over the last year would show this to be the case.

While all sources should be treated with some caution, some are far worse than others. The WP and NYT are some of those in the category of “far worse”. Among others…

Welp, there it is…the T-rumpian disclaimer…

And it is from the NYT, so some of you idiots cannot read it for fear of having your eyes burned out. Or some stupid thing.

Only idiots read the NYT. Or, those looking to be amused by lefty contortions.

T-rump, you Great God Cheeto, on a good day reads the NYT.

He has for decades.

This blog regularly quotes from the NYT for news and authority.

You are a moron.