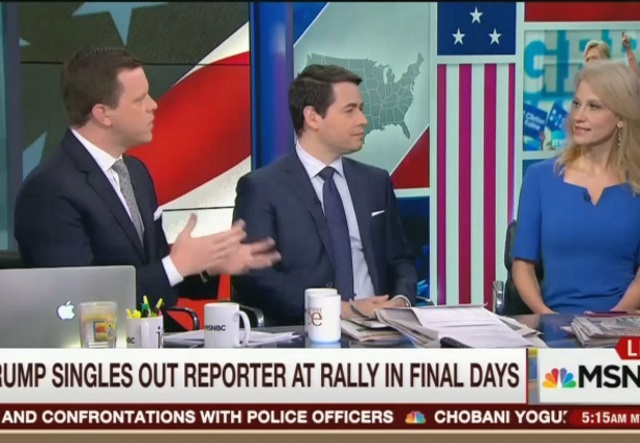 Trump campaign manager Kellyanne Conway was in the process of wrapping up a bravura performance on today’s Morning Joe. Conway was crisp, pleasant, substantive and nimble. And this Insurrectionist found himself thinking: for once, Conway can focus on the issues as the campaign sees them, instead of having to clean up after some intemperate statement Trump had made. And then . . .

Morning Joe rolled a clip of Trump at a rally repeatedly calling out by name NBC reporter Katy Tur for her failure to report the good news about his campaign. Willie Geist: “Do you think it’s appropriate for Donald Trump in a setting like that to single out any reporter by name given the heat reporters have taken in this and that Katy had to be escorted out by Secret Service at previous rallies?”

Things turned suddenly tense on the set, and there was a stunned/angry pause on the part of the Morning Joe people when Conway said that she had discussed the issue with NBC, would leave it there, and responded “no, sorry” to a request to shed more light on the subject. In fact, Conway went on to make the point that Trump and his supporters were reacting to reports that, by a ratio of 10:1, people believe the MSM wants Hillary to win. Kellyanne did concede that she prefers Trump to speak about “institutions generally” rather than single out individuals, such as Tur.

Note: At the end of the segment, Mika let readers know that the Clinton campaign—once again—had declined to make any representative available for the show. What’s Hillary afraid of?

WILLIE GEIST: Before we let you go, I want to play for you a sound bite of something Donald Trump said on the trail last night.

WILLIE: Do you think it’s appropriate for Donald Trump in a public setting like that to single out reporters, and not just an NBC reporter, any reporter, by name given the heat reporters have been taking in this, given the fact that Katy has had to be escorted out by Secret Service at previous rallies? Why is he calling people out by name in the back of the room?

CONWAY: Well, he obviously didn’t mean it in any malicious way. You heard what he said. But I’ve spoken to NBC News about that issue. And I’ll leave it there.

WILIE: Would you like to shed any light on it?

CONWAY: You can call me later.

WILLIE: What’s, why, why can’t we talk about it on TV?

CONWAY: I will tell you this just generally about the media. You saw the polls. I hope you saw them this week that by a margin of 10 to 1, that’s kind of way outside of the margin of error, by a margin of 10 to 1, Americans think the media want Hillary Clinton to win. I honestly think that the combination of Donald Trump railing against political correctness and him reminding people what they already suspect, which is that the fix is in in many places, not all places. Not even most place perhaps, Willie but people are so tired of being told what to think, how to act, what to do . . .

I really appreciated Joe on the set yesterday and you, as well, Mika, calling out some of your colleagues in the media. Not by name, but saying basically you’ve been cheerleaders, not reporters these last couple weeks. Where do these stories, particularly in print by the way and then they’re repeated on TV. The race is over. She’s going to have a landslide. People don’t like that. It’s their voice and their choice. And for many Americans, lady and gentleman, for them it’s the most important thing they’ll do in the next five days. It’s the best part about democracy. Everybody has one vote.

MIKA: All right: Willie’s going to call you later.

WILLIE: Do you agree Donald Trump was wrong to call Katy out by name?

CONWAY: I always prefer when he talks about institutions generally. And I had an exchange with Katy last night. And I’ve been in touch with NBC News.

MIKA: Kellyanne Conway, thank you. And I should note that we asked the Clinton campaign for someone from their campaign leadership to join us this morning, but they declined to make anyone available.

The reporters have bylines don’t they?

RULE 12: “Pick the target, freeze it, personalize it, and polarize it.”

The Media hates to be held accountable for their stories.

It’s about time that our side started turning things around and using Alinsky against the Alinskyites.

Indeed! It is partly why McCain & Romney lost. Not even in the same game. I’m reminded of Alan Dershowitz’s “Obama playing checkers while Putin is playing chess”.

And this is the game that has to be played nowadays it seems.

True. I came to LI from NewsBusters about six months ago. Morning Joe was my regular beat there and I continue to follow it. I believe that of all the morning shows, it usually has the best guests and most provocative commentary.

I do monitor other shows in the afternoon and evening, as well as on the weekends, and report on them whenever something interesting turns up.

That explains it. Thanks

A theory: Trump tends to fire warning shots and then name names when there is something going on the public generally isn’t aware of, but he and the person being named are. Could Trump be aware of Tur sitting on something related to the FBI investigations of the Clinton Foundation, and this is a signal to her that he knows she knows? Or her name came up somewhere in the Podesta emails? Trump has an unusual, but predictable, sense of fair play in most of his public attacks on people and I can’t help but think this will turn out to be another example.

I would have respond with this though …

“When the media acts solely for the benefit of the other candidate because they are biased, then they should be called out and escorted out as a protester, not the reporter they claim to be.”

The whole interaction between Newt and MeAgain Kelly was based on those “The Race Is Over” polls.

This has happened at least two times during this election season.

(MeAgain Kelly?) Stealing that fer sure

Calling out reporters, by name, who routinely misreport or report by omission should be the new standard. Why should they be allowed to insult and demean a candidate but not be held personally responsible for the veracity of their piece? They have been treated like prima donnas for most of their careers and now is the time to make them become responsible again. If the msm is to be given special protection then they must uphold the truth in their product.

Poor little snowflakes… they can dish it out, but they can’t take it.

Saratoga you might want to follow @markfinkelstein on Twitter. Allow notifications and you’ll never miss his posts. I’ve enjoyed his insight for years. His videos are always spot on and you’ll never be disappointed.

Really not seeing the problem or controversy with this. Sorrynotsorry. Do the reporters not call out the candidates by name? What’s wrong with calling out the reporters by name? The candidates don’t get to respond to slurs and dishonesty in reporting in the moment, either.

Obama has criticized reporters and media by name.

Trump might be giving people a name to search on in the Wikileaks dump?

I’m sorry but I’m missing something here. The quote has him saying “Katy”, not “Katy Tur”. Then they say she had to be escorted out by the Secret Service. How many ordinary people at a rally know network reporters so well that they could figure out who he was talking about?

I think he was saying K.D., not ‘Katie’, referring to KD Lang, or possibly Kirk Douglas.

Why Should rporters get the benefit of anonymity in their bias?