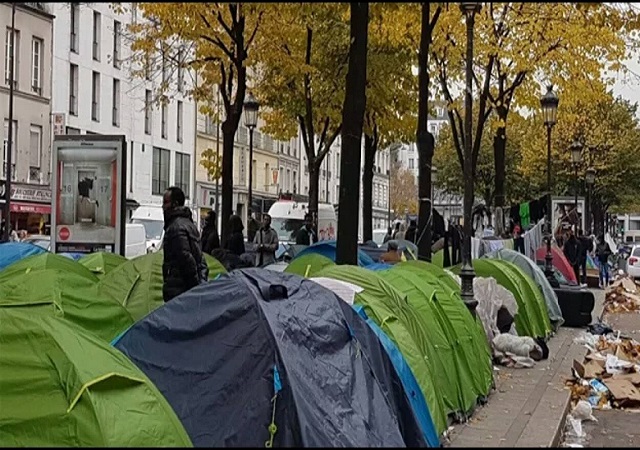 Just days after dismantling the infamous migrant encampment known as the “Jungle,” outside the northern French city of Calais, police are now swooping the ‘Mini-Jungle’ in the middle of Paris. This Mini-Jungle is now swarming with new inhabitants following last week’s clearing of Calais Jungle, with population here crossing 3,000.

Unlike in Calais, the Paris operation is not meant to the clear out the encampment, but only to clear the growing heaps of debris and waste littered in and around the occupied area. Despite the benign nature of the operation, migrants nevertheless clashed with municipal workers, forcing police to fire teargas. Migrants were allowed to move back after the place was tided-up by the municipal cleaning workers.

The leading leftist German newspaper TAZ described the ‘Mini-Jungle’ coming up around Paris’s Stalingrad subway station as the “conquest of Stalingrad,” alluding to the famous World War II battle on the Eastern Front in which the invading Nazi army fought the Russians for the control of the city of Stalingrad (now Volgograd). Ironically, German newspaper cheering the illegal occupiers of Paris has forgotten that the siege of Stalingrad didn’t end well for the invaders.

French riot police swooped on a makeshift migrant camp in northeast Paris on Monday, sparking a brief standoff at a site where numbers have soared since the closure of the Jungle shanty town in the northern port city of Calais.

The operation, largely consisting of identity checks on some of an estimated 2,500 migrants sleeping rough around a canal and railway bridge near Paris’s Stalingrad metro station, came as pressure mounts on the government to shut the camp.

Tension has risen with the speculation that police will move in to evacuate and close the camp definitively in the coming days, as the Paris authorities are demanding.

In recent year, Calais had served as the bridgehead for thousands of migrants hoping to get into UK by stowing away in trucks and other vehicles travelling through the Channel Tunnel. Calais’s shanty town earned the byname of ‘Jungle’ as it gained notoriety for lawlessness, and incidents of rampant crime and rapes.

Rising popularity of the Right-wing Front National forced President Francois Hollande to put an end to the anarchy in Calais ahead of next year’s presidential election. Government had hoped to shift the inhabitants of the infamous ‘Jungle’ to other refugee housings across France. But many of the former Calais-campers are now turning up in Paris.

If gone unchecked, it will only be a matter of time before this Mini-Jungle starts overshadowing the former Jungle Camp in size and notoriety. Just like the rest of Europe, France displays the lack the political will to secure its national borders and start deporting illegal immigrants.

These people are supposedly so keen to leave their native $#!+holes behind, then they turn around and proceed apace to turn their country of refuge into a $#!+hole just as bad as the one they left.

It’s profoundly disturbing to see Europe so willingly commit suicide like this, a mere generation or two after the horrors of WWII ~

Which means that now Paris, France has something in common with the Central Valley of California.

Europe? In two wars they have pretty well purged their gene pool of people with good sense.

If we don’t stop the immigration madness, this is what we have to look forward to.

Paris – the City of Light Blight

Any organizations who are principles to this ought to be avoided at all cost. Start with the U.N. and the E.U.