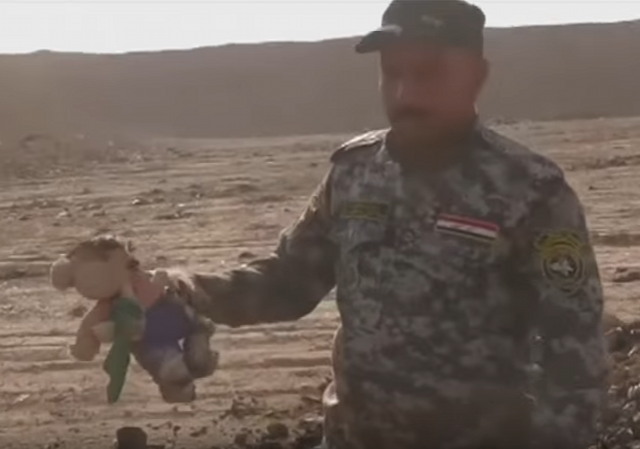 Iraqi soldiers in an area recently recovered from ISIS near Mosul made a gruesome discovery in what appeared to be a mass grave.

In a Field South of Mosul, Investigators Probe Mass Grave

The stench of death drew Iraqi soldiers to the unsettled plot of land freshly liberated from Islamic State fighters.

When a bulldozer scraped the ground, bones poked from just beneath the surface, along with clothing scraps, garbage bags, human remains swarming with flies — and even a child’s stuffed animal.

About 100 bodies, many of them decapitated, are suspected to be buried in what is likely the latest mass grave left by the retreating jihadis, officials said.

Investigators on Tuesday began their probe of the site, located near an agricultural school in the town of Hamam al-Alil.

The gruesome discovery by troops advancing on militant-held Mosul fits a pattern in territory retaken from IS. The extremist group killed hundreds as it swept across northern and central parts of Iraq in 2014 and is believed to have carried out a brutal crackdown since the Oct. 17 start of an offensive to recapture the country’s second-largest city.

“Investigators flew in this morning,” said Haider Majeed, a Cabinet official in charge of mass grave inquiries. “They’re conducting examinations to determine the cause of death.”

It was unclear who the victims were, although the discovery of a stuffed animal raised the harrowing possibility that children may be among the dead.

This video shows one of the soldiers holding up what looks like a teddy bear:

It gets worse. The Boston Globe reports some of the victims may have been tortured:

Evidence of ISIS torture found in mass grave near Mosul

Investigators combing through a mass grave south of Mosul said they found evidence of torture among the remains, as well as a stuffed animal — raising the possibility that children may be among the estimated 100 people buried there…

The bodies, many of them decapitated, were placed on piles of trash in a windswept field. Officials said it is believed to be the latest mass grave left by the retreating jihadis.

Forensic investigators from Baghdad said some of the bodies had been bound at the wrists and ankles. Some were blindfolded. They assumed most were shot.

‘‘They were killed by ISIS in acts of revenge,’’ said Dhargam Kamil, the director of the mass graves unit at the Al Shuhada Foundation in Baghdad. ‘‘In very brutal ways, it appears.’’

Religion of peace, my ass!

Obama your JV team should have been wiped out many many moons ago. This is what happens when good ignores evil. Disastrous foreign policy to say the least. This happened on his and her watch yet every one loves to point out how Trump has no foreign political experience. The world travelers let this happen. You can attack me and previous Presidents for what their failures were but that does nothing to take away from the atrocities the JV team are committing. A total pass for both on responsibility for these atrocities from the media compared to an all out blitz on Abu Ghraib. This is one of the reasons for voting against her but the snowflakes will never see it.

And Hillary wanted to bring in 110,000 of them, her first year in office. These already hardened and trained killers would have made Omar Mateen’s Pulse nightclub bloodbath look like a Sunday School picnic.