Mary Matalin v. Van Jones On Race in the 2016 Election

Mary Matalin v. Van Jones On Race in the 2016 Election

Progressives just don’t get it 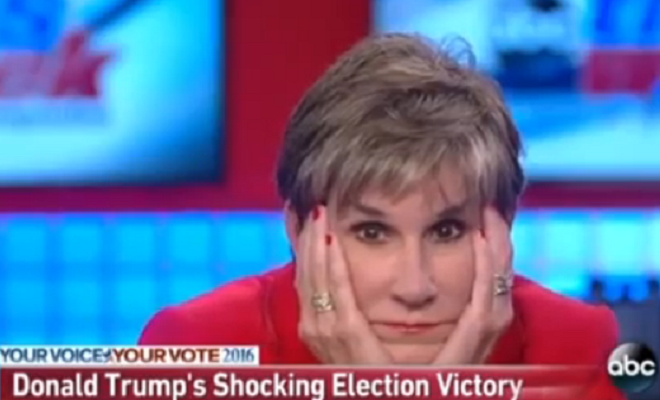 This Week had a bit of excitement as Mary Matalin and Van Jones got into a heated discussion about the role of race in Trump’s victory.

ABC’s This Week, political commentators Van Jones and Mary Matalin went at it over Jones’ much-played post-election comments about the results being a “whitelash” against Barack Obama.

Matalin demanded Jones retract those comments while discussing with another panelist about Democrats’ takeaways from the election. Jones then jumped in and reiterated that he stands by his comments that race played a factor in the election, especially from the alt-right faction.

Matalin responded back that he should tell his children that he went to Yale and is a published author. She also added that he shouldn’t be a “racial polemicist” when he noted that he was the first person in his family born with all of his rights, leading to Jones blowing up.

One of the more bizarre moments occurred after Matalin, quite rightly, points out that the progressives won’t reach the rust belt and other white voters they just lost to Trump by whinging on about climate change and Putin. To this, Nation editor Katrina vanden Heuvel responds that the left just needs to explain to the people in South Carolina that if they don’t “deal with climate change,” they’ll be “overrun by rivers and water.”

Focusing on climate change and transgender bathrooms while calling them racist is the surest way to win back white working class voters.

You could not reach the depths of liberal hypocrisy in the Trieste.

Unfortunately, it is getting to the point where you can say the same thing about the growing ignorance of most Americans. They can quote NBA, NFL, NCAA, and NASCAR stats to no end and will watch it for hours and hours. Don’t even get me started on the addition to the entertainment industry.

However, most are clueless when it comes to the Constitution, their state and federal representatives, or self-reasoning beyond a 30 second sound bite provided to them by the media. The things that once mattered and kept us truly free. Trump or no Trump, this won’t get any better. The best we can hope for is a delay in the inevitable.

I am afraid we are looking at II Chronicles 7:14 in the rear view mirror. Don’t get me wrong, I think the short-term picture is far, far brighter without Hillary as President, but in the end, the long-term outlook isn’t pretty. Nor does it appear avoidable.

I’ve got you linked up, here: http://americanpowerblog.blogspot.com/2016/11/mary-matalins-facial-expressions-are.html

If the Progs want to keep sticking their heads in the sand and ignore real solutions that will bring them back to electoral parity, let them!

All the better if they’re in a long political wilderness. Let them lose a few more state legislatures and we can get amendments passed through the back-door Constitutional Convention of States method. Get the Levin Liberty Amendments passed!