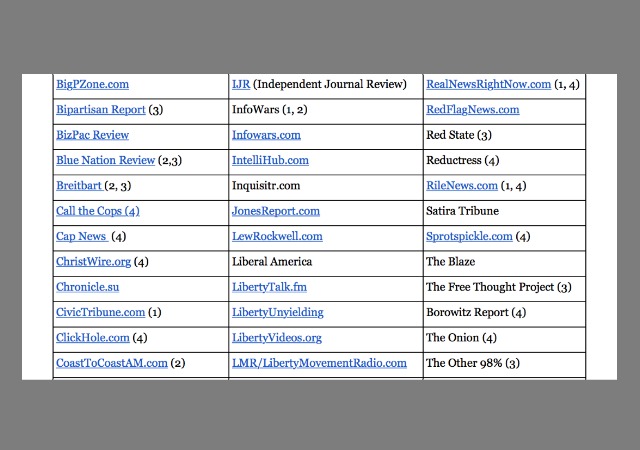 As we blogged Sunday, there’s a whole sect out there attempting to blame fake news sites for Hillary’s electoral failure.

Facebook responded to complaints about fake news sites, as did Google.

In an attempt to distinguish fake or misleading news sites from legit sources, Melissa Zimdars, Assistant Professor of Communication at Merrimack College in Massachusetts, created a list of, “false, misleading, clickbait-y and satirical ‘news’ sources.” The LA Times published the list.

Sites like the The Onion and Clickhole, satirical news sites made the cut, and rightly so, but also included were The Blaze, Independent Journal Review (IJR), Project Veritas (James O’Keefe), Twitchy, and RedState. None of the latter are fake nor misleading, nor clickbait-y, nor satirical, and most of them engage in original reporting from time to time.

One person’s opinion on the matter wouldn’t (and shouldn’t) make much of a difference. But by publishing the (mostly) bogus list, the LA Times gave it legitimacy. It’s now being circulated through social media channels as the authoritative list on “real” news.

CATEGORY 1: Below is a list of fake, false, or regularly misleading websites that are shared on Facebook and social media. Some of these websites may rely on “outrage” by using distorted headlines and decontextualized or dubious information in order to generate likes, shares, and profits. These websites are categorized with the number 1 next to them.

CATEGORY 2: Some websites on this list may circulate misleading and/or potentially unreliable information, and they are marked with a 2.

CATEGORY 3: Other websites on this list sometimes use clickbait-y headlines and social media descriptions, and they are marked with a 3.

CATEGORY 4: Other sources on this list are purposefully fake with the intent of satire/comedy, which can offer important critical commentary on politics and society, but have the potential to be shared as actual/literal news. I’m including them here, for now, because 1.) they have the potential to perpetuate misinformation based on different audience (mis)interpretations and 2.) to make sure anyone who reads a story by The Onion, for example, understands its purpose. If you think this is unnecessary, please see Literally Unbelievable.

The only one of the above mentioned sites that currently has a category is RedState, marked as a 3. The rest are on the list without current explanation as to why they were included, though Zimdar indicated she would be updating the list and explained not all sites listed were considered fake.

I will be updating the categorizations and adding links gradually through the next couple of days.
Many of the websites on this list continue to offer valuable journalism and/or satirical commentary. For example, a website included on this list wrote an overall thoughtful piece about the list, but the headline suggests that every source on this list is fake, which misrepresents the list. Finally, I do not condone plug-ins that automatically block any of the websites listed below. And as a reminder, not all of the sources listed below should be considered fake. 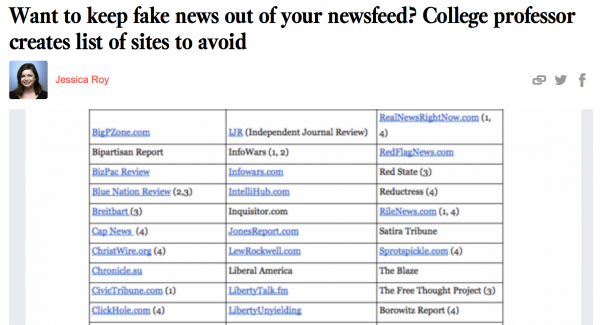 Zimdar’s view is myopic and misleading in itself. She explained in an update that she trusts major outlets, seemingly neglecting that most of the conservative blogs she’s included draw from those outlets she trusts and provide greater context to the story, or, (like us), their work is frequently linked to by the sources she claims she trusts.

Kira Davis, writing for RedState was not impressed by the LA Times‘ work nor Zimdar’s list:

In fact, RedState writers go to great lengths to debunk false stories they find in the media. RedState has produced some of the top conservative talents, including former Editor-in-Chief Erick Erickson, and regularly features articles submitted by members of the House and Senate and from presidential candidates. The RedState Gathering is covered by major media, and has top caliber speakers and was even the site of the announcement of a Presidential campaign (Rick Perry.) RedState content is regularly featured in the mainstream press and has been quoted frequently by even such old-school journalism outlets as The New York Times many times this year alone.

IJReview is based in Washington D.C. and has a very strong and lucrative relationship with Facebook, even teaming up with the social media behemoth to produce one of the primary debates. Their reputation on Capitol Hill is well-known, and politicians and high-profile media personalities regularly contribute guest posts.

The Blaze provides a lot of opinion pieces some people like Zimdars might disagree with, but they most certainly do not post ‘fake news’ or even misleading headlines. MSNBC regularly produces sensational headlines that aren’t backed up by the research but funny enough; they are nowhere on this list. No mainstream liberal reporting agency is on this list.

Zimdars’ list is making the rounds today, and it is outrageous. She needs to put herself on her list, as it is salacious and irresponsible and just a click-bait piece. The L.A.Times needs to be on this list for publishing it! Shame on you all.

Zimdars’ lack of perspective is dangerous. It affects the lives of good, hardworking writers who excel at bringing the latest news and opinion to their readers. This is not a game; this is our livelihood.

I didn’t look at the list, but I assume it includes sites like CNN.com, MSNBC.com, NYT.com, CBS.com, ABC.com, and all the other liberal fake news sites?

Exactly BUT thats not the purpose of this list. This lists sole reason is to disparage any “right wing” news outlet and allow lefties to say “nah, ignore them they are on this list that says they aint news”.

The people who publish this junk must be really stupid. Most websites that I go to were recommended by people I trust. I don’t trust the national liberal media.

More propaganda. Only libs are that dumb.

Um, pizzle is not a verb.

(N)1. A good looking female.
(V)2. To get to know or politic with a member of the other sex (or in some cases, the same sex).
(V)3. To lead away from duty, accepted principles, or proper conduct.
(V)4. To induce to engage in sexual conduct.
(V)5. To win over; attract.
Example: (I been trying to pizzle this girl since high school) (We goin to the beach today I heard pizzle’s are all over)
http://www.urbandictionary.com/define.php?term=pizzle

Congress may have to address the politicization of social media.

What better way of destroying them than to use their own platforms against them…like what Donald just did! 🙂

Yesterday’s San Diego Union-Tribune, which is owned by the same company that owns the LA Times, ran two opinion pieces,

“Bannon Selection Elevates Hart Right – Trump aide brings nationalist agenda to the White House” by Jeremy W. Peters, who “writes for” the New York Times. It’s an opinion piece placed as if it were news, filled with invective from Mr. Peters.

another was “Google Highlights Bogus Election Story – Report falsely claims Trump’s vote total exceeded Clinton’s” by Michael Liedtke, who “writes for” the Associated Press, and has what appears to be a blurred screen shot of something.

The interesting thing about Liedtke’s article is that there have been numerous complaints from the kiddies at Reddit about Google’s oddities with respect to search results, as well as faked stories on Twitter, and yet the AP has been serenely blind to all of it, until now.

This is the first story I have found that was allegedly faked in favor Trump, although there have been several stories contending that Trump would have won the popular vote absent vote fraud. So, I have to wonder what text surrounded that small screen shot.

I guess their list is fake, as well, and so http://www.LATimes.com should be included in it.

Is DailyKos in there? Because if they’re going to label RedState as “fake news’, they really need to look there.

The deeper leftoids bury their heads in the sand, the further they stray from anything American voters want to hear.

The less they see and hear, the more vulnerable they become.

This woman is treading on the SPLCs turf.

LegalInsurrection.com didn’t make the cut? Ms. Zimdars failed to sufficiently disagree with the content on this site?

Thank you, anti-speech liberals. Please continue to make lists of information brokers you don’t want us to listen to. We need to know what sites the likes of CNN and WaPo find “dangerous” to whatever false narrative the Left is floating.

Consider these source. Here is the professor’s short list of newsources she “trusts” directly from the document she posted:

“”Some people are asking which news sources I trust, and all I can say is that I read/watch/listen very widely, from mainstream, corporate owned sources (The New York Times, The Washington Post, The Boston Globe, The Wall Street Journal, Forbes) as well as The Atlantic, National Public Radio…..””

Shocked! I am just so shocked that they would do something like this. I’ve always trusted the reporting of the LA Times, they’re almost as good as the National Enquirer in their depth and breadth of insightful stories. I sure hope my budgie doesn’t poop on that portion of the paper, I’ll like to read it.

there are almost no liberal sites listed… what gives?

Because it’s trying to strangle conservative views through financial warfare. What’s mysterious about it?

She is not myopic she is a damned liar and hack.

Who do I send my thanks for alerting me to the existence of the Red State site?

FNC scammity did it’s own strangling.
Apologizing for fake news hours after reporting an obviously fake story doesn’t give them a pass.
Allowing Trump to promote a National Enquirer story about Raphael Cruz being a cohort of the JFK assassin was a disgusting and deliberate act by scammity.

Breitbart is not conservative or reliable. Probably a good site to avoid at all costs.

And once they’re disposed there will be another list. Count on it.

The L.A. Times published a list of websites – and you won’t BELIEVE what’s on it! #18 will blow your mind!

Can’t believe that the Huffington Post was not included