Conway: Some in MSM ‘Still in Campaign Mode and Have Political PTSD’ 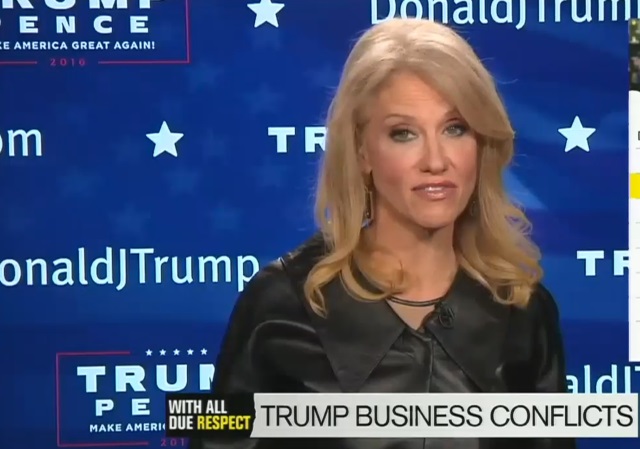 On With All Due Respect, John Heilemann was aggressively questioning Kellayanne Conway, arguing that conflicts of interests would arise when the Trump administration makes decisions that could affect Trump business interests at home or abroad.

Conway eventually had enough. She shot back: “look, John, I know the election results are very tough to swallow, particularly for those of you who just couldn’t see it coming, couldn’t even conceive of the possibility that the other candidate may actually win, that you don’t understand America.” Ouch.

Heilemann insisted that his questions had “nothing to do with me or my views,” but Conway wasn’t buying, suggesting that some in the media “are still in campaign mode and have political PTSD.”

JOHN HEILEMANN: The question about policy doesn’t go to the broad question of job creation, it goes to the questions of what rulings that the EEOC would make, that the National Labor Relations Board would make, that are all going to have Trump appointees, all listening to Mr. Trump, where specific hotels, specific business interests of his would be affected by regulatory rulings, by legal rulings. Foreign policy with respect to specific countries, like a particular country in South America or in Asia. All of those decisions — he has not laid out his policy in advance on those questions.

KELLYANNE CONWAY: It sounds like they will be called into question even if he hasn’t done that. Cause you’re calling them into question. Look, John, I know the election results are very tough to swallow, particularly for those of you who just couldn’t see it coming, couldn’t even conceive of the possibility that the other candidate may actually win, that you don’t understand America.

This man understands America, animated America, and now will represent all Americans. But this whole line of argument is presumptively negative and presumptively accusatory. You are presuming things —

CONWAY: I read it. Hours ago.

CONWAY: No, you’re presuming — well, a lot of this does. Because I think some people are still in campaign mode and have political PTSD I guess.

I’d say it’s more like rage-mode. The MSM is seething that they’ve met their match and he’s exposed them for the biased frauds that they are. Moreover, now they have the choice of continuing down the ridiculous road they’ve been on, or getting off their lazy backsides and doing some journalistic work.

Kellayanne Conway wasn’t about to get suckered into the “What If” game, especially as it was one they avoided eight years ago, much to the detriment of this nation.

I have to go ( to watch Lucifer in the other room ).
I just want to point out Trump’s reading of the riot act to the media
ala Drudge
http://nypost.com/2016/11/21/donald-trumps-media-summit-was-a-f-ing-firing-squad/

I sure hope she takes the job of Press Secretary, if she wants it.

Damn, I like how she hands them their asses. She is as reverse blonde joke as it gets.

You should have seen her rip into Cuomo.

And the worst bias about this?

If Trump had been the Democrat nominee, the media would be blasting “Girl Power!” at us 24/7. First female campaign director and she pulls one of the most stunning upsets in political history.

Consider, on election day, all the pundit chatter was about how the GOP was doomed for a generation. She completely flipped that around. Now its the Dems who are wandering in the wilderness.

And she got no credit from the mainstream. Where are all the so-called feminists? Still hiding in their Safe Spaces?

It’s really sad. The Left whines about explaining “misogynist” Trump to their kids, but Kellayanne Conway should be only every girls lips, inspiring them to accomplish the impossible.

Shame on you MSM.

Kellyann is just like Hillary Clinton – except for being a corrupt lamebrain at death’s door.

And she’s actually competent at the job she’s holding. Unlike Senator Clinton, and Secretary of State Clinton.

If Trump were to liquidate his assets (which would take months if not years) the media would be screaming for an investigation into every transaction.

Of course what the media doesn’t point out is the fact that all previous modern day Presidents made their wealth within the Government by being Public Servants.

To me the fact that Trump made his money by actually working for it in the Private Sector should be heralded by the mfm left, right and centre! But no, now all we get is this bollocks about liquidating his assets.

Funny how we never heard any calls for HRC to liquidate her largest family asset, the Clinton Foundation!

Its no wonder no one trusts the mfm any more.

So good to see the media get what they deserve!

I’m sure Mr. Heilemann was just as concerned about Hillary Clinton’s obvious conflict of interest as Secretary of State and asked her the very same tough questions, right? Cause if he didn’t that would just make him a bootlicking, partisan shill which can’t be right.