Keith Olbermann: “Anybody seeing the plot lines of our movie The Trumpchurian Candidate yet?”

Keith Olbermann: “Anybody seeing the plot lines of our movie The Trumpchurian Candidate yet?” 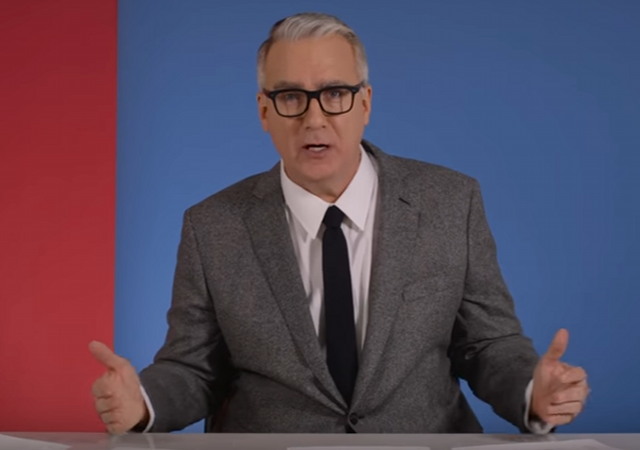 Keith Olbermann left MSNBC a few years ago then went to ESPN for a while where he somehow still managed to report left wing politics. Now he’s working for GQ and appears to be broadcasting out of what looks like a middle school gymnasium.

In his most recent report, Olbermann embraces his inner Carville and sounds the alarm about Donald Trump who is, like the Manchurian Candidate, a plant for a secret takeover of Washington, DC by Russia.

Keith Olbermann takes Donald Trump’s oft-repeated statement, “wouldn’t it be nice if we got along with Russia,” and makes the case that Donald Trump is a Russian agent.

Here’s a partial transcript via the left wing site Raw Story, which takes this seriously:

Comparing Trump to the main character in “The Manchurian Candidate,” Olbermann noted the similarities of life imitating art.

“The plot quickly lines up behind a kind of inevitable logic,” Olbermann explained. “Once you buy into the premise that not the fictional Soviets of 1962, but the real life version of the post-Soviet Russians of 2016, would go to any length to influence who becomes president of the United States.”

“The kaleidoscopic chaos of Donald Trump’s fever-dream of a campaign also quickly lines up behind a kind of an inevitable logic,” he continued.

Olbermann went on to make his case in what he called, “The Trump-churian Candidate.”

This isn’t meant to be funny, but it really is:

Cable news just isn’t the same without this guy.

Anything Keith Olbermann is against is probably for the good.

He is really not much different than The NY Times or the Washington Post.

How white of him to reach out to his Ober Allies.

And Kent Brockman, as a stand-in for the MSM, reminds me of the shepherd who gleefully sells out the flock for crumbs. As Brockman, himself representatively as gutless as any of our MSM and politicians and other slavish worshippers at the PC altar, might put it,

“Ladies and gentlemen, er, we’ve just lost the picture, but, uh, what we’ve seen speaks for itself. The Corvair spacecraft has been taken over — ‘conquered’, if you will — by a master race of giant space ants [Muslims]. It’s difficult to tell from this vantage point whether they will consume [convert] the captive earth men or merely enslave them [or exercise the third Muslim option, kill them]. One thing is for certain, there is no stopping them; the ants [Muslims] will soon be here. And I, for one, welcome our new insect [Islamic] overlords. I’d like to remind them that as a trusted TV personality, I can be helpful in rounding up others to toil in their underground sugar caves [or to get them to pay the jizya as required by Sura 9:29*].”

*Translation, “I’ll happily be a Kapo.”

It hasn’t hurt Soros to have that on his resume.

Well, the FBI is leading the coup, and Obama has vouched for Comey.

This does look lik the mother of all conspiracy movies.

I wonder if Obama is clearing the way for Michelle in 4 years?

Some folks say Fox News is off DirecTV due to technical difficulties.

Well, the prog drones are nothing if not consistent. They will ALWAYS project the misdeeds of their own onto the other side.

Hillary and Bill enrich themselves while allowing Russian firms to acquire 20% of US uranium reserves. Hillary’s inept foreign policy allows Putin to run rampant, threatening Europe and establishing himself as the superpower in the Middle East, yet it’s the other side that is somehow going to allow Russia to hurt us?

It amazes me that people like this guy don’t get curb stomped when they go out in public.

This shrimp is The Worst Person in the World.

I love the smell of desperation in the Clinton crime syndicate.

It disturbs me that Soros owns voting machine companies. Anything programmable can be programmed to do whatever you want. We all know what Georgie wants and it’s not to our benefit.

Keith Olbermann’s asshole grew together years ago and nothing but crap has come out of his mouth since.

That’s not what the man said, is it, Val?

Yep, that’s what he said.

Olbermann on morning after a Trump victory:

“I for one welcome our new Trumpian overlords!”