Last gasp effort which may have effect of legitimizing Trump’s win.

Jill Stein, Green Party candidate, officially has filed for a recount of the presidential election in Wisconsin. 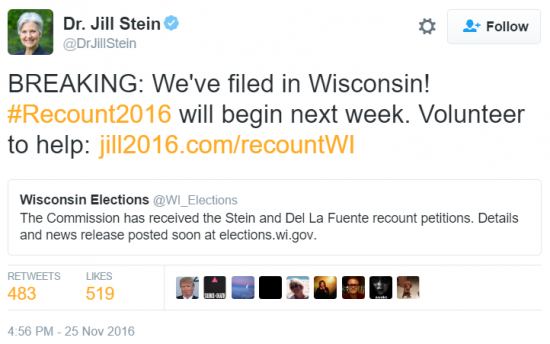 The Wisconsin Elections Commission posted the following statement on its website:

“The Commission is preparing to move forward with a statewide recount of votes for President of the United States, as requested by these candidates,” Haas said.

“We have assembled an internal team to direct the recount, we have been in close consultation with our county clerk partners, and have arranged for legal representation by the Wisconsin Department of Justice,” Haas said. “We plan to hold a teleconference meeting for county clerks next week and anticipate the recount will begin late in the week after the Stein campaign has paid the recount fee, which we are still calculating.”

The last statewide recount was of the Supreme Court election in 2011. At that time, the Associated Press surveyed county clerks and reported that costs to the counties exceeded $520,000, though several counties did not respond to the AP’s survey. That election had 1.5 million votes, and Haas said the Commission expects the costs to be higher for an election with 2.975 million votes. “The Commission is in the process of obtaining cost estimates from county clerks so that we can calculate the fee which the campaigns will need to pay before the recount can start,” Haas said. The Commission will need to determine how the recount costs will be assessed to the campaigns.

The state is working under a federal deadline of December 13 to complete the recount. As a result, county boards of canvassers may need to work evenings and weekends to meet the deadlines. “The recount process is very detail-oriented, and this deadline will certainly challenge some counties to finish on time,” Haas said.

A recount is different than an audit and is more rigorous, Haas explained. More than 100 reporting units across the state were randomly selected for a separate audit of their voting equipment as required by state law, and that process has already begun. Electronic voting equipment audits determine whether all properly-marked ballots are accurately tabulated by the equipment. In a recount, all ballots (including those that were originally hand counted) are examined to determine voter intent before being retabulated. In addition, the county boards of canvassers will examine other documents, including poll lists, written absentee applications, rejected absentee ballots, and provisional ballots before counting the votes.

“Wisconsin has the most decentralized election system in the United States,” Haas said. “The system has strong local control coupled with state oversight, resting on the partnership between the Wisconsin Elections Commission, the 72 county clerks, and the 1,854 municipal clerks. State law clearly gives each county’s Board of Canvassers the primary authority to conduct the recount, and to decide which ballots should and should not be counted. Recounting votes is an open, transparent process in which each of the candidates may have representatives present to raise objections, and where the public may be present to observe.”

Stein has raised a reported $7 million to fund a recount effort in Wisconsin, Michigan and Pennsylvania. Today was the deadline to file in Wisconsin.

There had been a lot of speculation that the fundraising was some sort of scam to fund the Green Party, but at least in Wisconsin Stein seems to have followed through.

Not saying this Jill Stein thing is a scam, but if it were a scam, it would probably look a lot like this. https://t.co/pg4eAuFQ4h

Wisconsin has 13 days to complete the recount

While the recount demand is desperate, and is cheered by many Clinton supporters, it may have the unintended consequence of legitimizing Trump’s win. No longer will Democrats be able to spread conspiracy theories about hacking of computers and statistical anomalies.

A lot of Clinton supporters blame Stein for Clinton’s close loss in several swing states, and are somewhat bitter:

For some perspective on the original count being off by over 20,000 votes in order to change the result, consider the 2011 recount in the Wisconsin Supreme Court election between Joanne Kloppenburg and David Prosser. The recount changed only about 300 votes in the count, out of approximately 1.5 million cast. About 3 million votes were cast in the 2016 Wisconsin presidential election, so assuming the same error rate, that would be about 600 vote change.

Michigan officially went for Trump. So Wisconsin and Pennsylvania no longer matter. Clinton couldn’t even tie electoral votes if she were somehow able to win both these states in the recount.

The RNC had better get some smart lawyers over there quickly. The recount is a pretense so the votes can be changed.

In 2000, the Dems tried *so* hard to pull this kind of coup. All it would have taken was twenty minutes for one aide with a stack of punchcards and a straightened paper clip to change the presidency.

“Legitimizing Trump’s win” is hardly an issue. He won, and that’s that. They can carry around “Not My President” placards until they catch fire, and it won’t matter.

‘Fraid not; it won’t have any effect at all. They’ll bitch about how many angels can dance on the head of a pin if they think it will hurt the Republicans. Recall the vast effort expended on l’affaire Plame; an entirely imaginary crisis engineered solely to annoy Bush. Fact doesn’t matter. Attack is the only goal, and the press is the tool they use to do it. It’s not working so well against Trump, but it’s all they have and they’ll keep hammering at it; they’re not the “new idea” party, and never will be.

The fact that Stein isn’t a Democrat does not imply that this latest tactic isn’t a fraud. She appears to be fronting for Hillary. I expect an investigation (you know, of the sort the press and the Administration won’t do) would show that the money Stein raised for the recount has Clinton Foundation fingerprints all over it.

If she is concerned with integrity why not Virginia?

The leftists are doing everything in their power to demonstrate Trump needed to win. I thought Trump was the wrong answer to a question that needed to be asked and I just may turn out to still be right about that. But I always the sentiment, why people were voting for Trump. This is typical of the Bolshevik left.

“‘You know, comrades,’ says Stalin, ‘that I think in regard to this: I consider it completely unimportant who in the party will vote, or how; but what is extraordinarily important is this — who will count the votes, and how.'”

How fitting the leftists are doing this in Wisconsin. How many times have the scumbags tried to overturn election results in Wisconsin? Two dozen, now?

That’s what they’re good at: finding ways to waste other people’s money.

The funny part is that Wisconsin voting machines are not networked or connected to the internet. For there to have been wide spread fraud would have taken numerous people on election day going around convincing the overwhelmingly conservative election officials to commit a crime. If this was right wing conspiracy they will need to explain the numerous ballots that had Trump and Feingold on the same ballot.

The machines don’t have to be connected to the internet or each other.

The fact is that the ballot that is created which appears on the screen is created by on another computer and then loaded onto the voting machines.

Phase 1: Recount all Wisconsin
Phase 2: Select expected blue counties that just went Trump and demand recount in those. Reprise 2000….
Phase 3: The Left had a dead even Supreme Court to back them up now. It’s not about the Constitution, it’s about The Party.
Phase 4: Brand Trump “selected” not elected.

Except they did Phase 4 first, hence all the carping about electoral votes vs. total votes cast. Still, if they can get into a few thousand ballots where the voter did not mark either candidate and ‘assist’ a little mark in the right column…

**Urgent**
THE ELECTION IS IN THE PROCESS OF BEING STOLEN.

…They could not swing the electoral college even with violent threats, so now team Hillary pinch hitter Jill Stein has opened the door for the final steal. Stein… has nothing to gain from this recount. And it is all based on false claims, because Michigan CANNOT BE HACKED. Michigan has a CERTIFIED VOTE. There is NO WAY THIS IS LEGIT. And that means ONE THING – there are liars doing it, powerful liars who know in advance they are going to find what they are looking for.The only beneficiary is Hillary Clinton and she indeed will steal the election if we permit it.

1. Six electors DID NOT switch away from Trump, they switched away from Hillary.
2. Trump DID NOT say he would not prosecute Hillary, he in fact said the opposite and the MSM lied again, to undermine Trump’s support.
3. A bot paid for the election recount… How did she raise 4.5 million for the recount on THANKSGIVING DAY which is among the slowest internet days of the entire year?

To clarify, there are strong indications that a bot was donationing to her go fund me page.

This could possibly be money laundering?

Stein got 31,000 votes in Wisconsin. It is in ‘her’ best interest to get a recount why? Can’t believe millions of taxpayer dollars are going to be wasted on this for no legitimate reason. Just an opportunity for Democrat voter fraud to attempt to erode Trump’s win.

But there are so many closets to be searched for ‘lost’ ballots that nothing is impossible. Franken found ‘lost’ ballots all over the state during his recount in Minnesota.

Non-lawyer here … asked of the legal professionals here, why can’t the courts simply stop the recount petition from Stein as without merit and/or on the basis that she has no standing? i.e., she’s not going to recover enough votes through recount to alter her position (-1.375 million votes down).

Just from a practical knothole, it seems like the person(s) requesting recount ought be within reasonable striking distance of the winner in a recount …