Jesse Jackson Leads Student Walkout Over Trump at U. Michigan

Jesse Jackson Leads Student Walkout Over Trump at U. Michigan 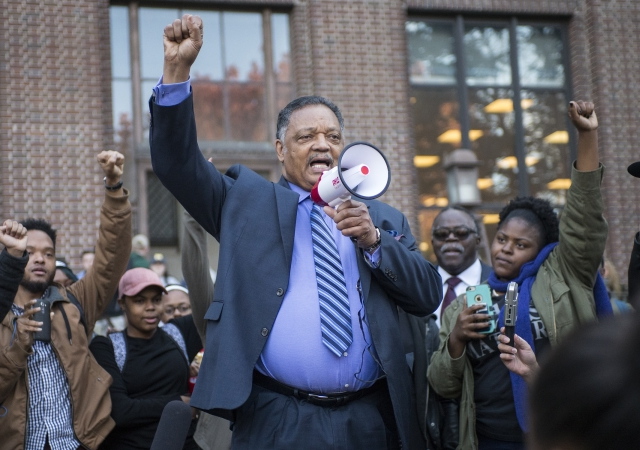 You knew the Reverend Jesse Jackson was going to get in on all this anti-Trump protesting, didn’t you?

Nearly a thousand people gathered on the Diag and marched through University of Michigan buildings for a student walk-out protest against racism on campus following President-elect Donald Trump’s upset win Wednesday afternoon, briefly shutting down traffic.

The walkout, which was organized by the student organization Students4Justice, was also attended by civil rights activist Rev. Jesse Jackson and was part of a national movement of walkouts across the country.

“This walkout is a national movement that is happening in response to the election, as well as the increase in hate crimes and other forms of violence against marginalized (folks).” the event description says. “We are doing this to hold President Schlissel and our Regents at the University of Michigan accountable for their claims of valuing diversity and student safety and well-being.”

Prior to the event, Students4Justice also released a list of demands that they hoped to achieve from the protest.

He’s still amongst us because God doesn’t want him and satan likes his work.

Wow, that old racist is still at his malignant and corrupt activities. I wonder who he is trying to extort money from with this activity.

Or maybe it is just a pro bono expression of his hate infested soul.