James Carville: ‘I’m a Nervous Wreck, Not Impossible’ for Trump to Win

James Carville: ‘I’m a Nervous Wreck, Not Impossible’ for Trump to Win

But Republican Steve Schmidt Sees Easy Hillary Win: It’s Been ‘Over’ for Some Time 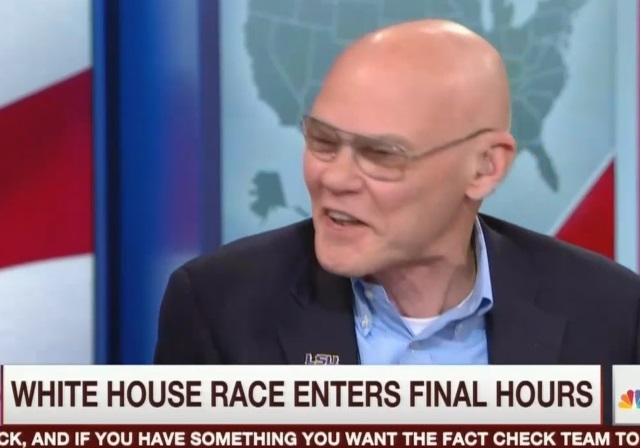 If Serpent Head is nervous . . . There was an ironic contrast on today’s Morning Joe. On the one hand, Steve Schmidt—former McCain campaign manager turned Trump antagonist—sees no real chance for the Donald. Said Schmidt: “I’ve been in the camp that says it’s been over for some time,” and that “the bill is coming due for the tone and tenor” of Trump’s campaign. Schmidt sees Hillary cruising to a win with 320-340 Electoral College votes.

It was actually James Carville who in contrast said that it’s “not impossible” for Trump to win, and indeed that he’s a “nervous wreck.” Of the swing states, Carville said he feels best about Florida for Hillary. But he added: “I think she has a better chance to carry Arizona than Ohio.” Since all recent indications are that Trump has Arizona comfortably in hand, it sounds like Carville has written off Ohio for Clinton.

JAMES CARVILLE: No! I don’t think it’s impossible. I’m as nervous as — I’m a nervous wreck. I’m always a nervous wreck before an election. I wouldn’t be in politics if — of course I. I do think of the states of North Carolina, Ohio, Florida, Iowa, I think she’ll do Florida, be a better state. I am more confident about Florida than anything. And I also think she has a better chance to carry Arizona than Ohio.

I was looking at the early voting totals this morning for Florida where 33,000 more Democrats voted than Republicans.

But, there were well over 1 million unaffiliated who voted too. If they poll significantly for Trump, Florida will go red.

I will be voting tomorrow morning because I want to mark a paper ballot and didn’t want to vote early on an electronic machine possibly rigged by Soros.

Me as well. I don’t trust early voting. Even though Seminole Couty is a Rethuglican county, I’ll vote at my polling place where there’s more eyes on it AND where I have to produce ID.

conservative tarheel in reply to legacyrepublican. | November 7, 2016 at 1:08 pm

I know ALOT of Dems that are voting Trump …
here in NC nearly everyone is a registered Dem …
( it maybe part of the baptismal services :D)
and 99% of them are voting for Trump.

legacyrepublican in reply to conservative tarheel. | November 7, 2016 at 1:59 pm

Maybe you should immerse them in the Red or the Brazos or the Trinity instead of the French Broad. 😉

Ah, being immersed in the french broad…

(sigh) Memories of my impetuous youth… Yvette, where are you now…???

Who the hell can downvote that beauty?

I am probably wrong but wasn’t Schmidt one of the ratbags that worked on McCain’s campaign.

You’re not wrong. That little weasel Schmidt did everything in his power to sabotage Sarah Palin when he was McCain’s “chief strategist”. Why people still listen to this confirmed loser is beyond me.

Two months ago my home state of Missouri was supposed to be a swing state. Polls were tied. Then last week, Monmouth and Emerson released polls showing Trump up 15 and 14 points. I have no idea how reliable those polls are. But Ann Seltzer, who I learned last cycle is THE expert of Iowa polling, has Trump ahead by 7 in Iowa. Since Iowa borders Missouri and the states are similar economically and demographically, I am assuming that even if Trump is not ahead by 14 or 15 here, he is probably ahead.

That said, Democrats are still spending money here. Hillary’s campaign ran a devastating ad yesterday that took many of the ugliest and most vile things Trump has said – speaking in his own words – and put them in an ad. (This seems to be what Schmidt is referring to.) It played during the Chiefs football game, so it got lots of viewers. Will it change minds? Who knows.

This is the wackiest election in my life. I won’t be surprised if Hillary pulls out a win here in Missouri after all. Nor will I be surprised if Trump wins the state by 15. It’s crazy.

I don’t think an ad will change anyone at this late date except a few village idiots, whom Hillary wants to raise our children .

All I know is that I have never been very good at predicting the outcome of Presidential races. I am a permanent mail-in voter in my state, and I filled out my 2-page ballot, yesterday. I will hand-carry it to the polling place tomorrow. It will likely not make a difference because my guess is that Hillary will take California, but at lease my vote is auditable.

We have about six total feet of ballot this time. Apparently a lot of organizations want to bypass the Legislature, and go to a largely uninformed public. I know they are uninformed, because I know from what I read that these items have not had the advantage of a full pubic vetting: there are too many of them. So, I voted mostly “No.”

We have that legalized dope issue here. Ostensibly medical ‘for the sick’. It’s been pushed heavily by John Morgan, a Kennedy-loving parasitic ambulance-chaser.

Dope is an issue that helps democrats two ways. One, it helps to keep the electorate stupid and placated and two, it can be used as an issue later to claim Republicans will take your legal dope.

Let’s see.
The guy who managed the campaign for the guy who came out a week before the economic collapse to say “The fundamentals [of the economy] are strong.” says Trump will lose

Since last year it has been obvious that the only chance Hillary would have of winning is to convince the “other side” their guy was losing nad that her election was inevitable, then have her voters come out and hope the other sides vote is depressed.

He now is realizing that plan is not going as well as it needs to for Hillary to win.

There’s an advantage to living in a state Republican enough that Hillary gave it up before the primaries. (As an example, Cruz got 48% of the Republican vote to Trump’s 23%) With almost no national money being burned here, we’re down to some *really* nasty attacks by the state-level Democrats claiming Brownback is some sort of evil thief who steals from the highway funds and school children, where the virtuous Democrats will ‘fully fund’ the schools once they take over.

Strangely enough, the Democrat ads and debate performances never quite define just how much tax money it would take into the school system before the state Supreme Court quits yanking the football away, normally at the worst possible time for budgeting. It may get *very* interesting if the ‘Vote ’em out’ people get organized because five positions are up for judicial retention this year, and only Stegall is being supported for retention. We’ve never voted any justice out before, but…

Steve Schmidt can go band his head against a cement wall.
He has been a never Trump from the start!

How many times has the biased media said Trump was finished?
Last count was about 25 times!

Ready for the media melt down when Trump wins!!

Schmidt? My German grandfather didn’t teach me that word. Does it mean shithead?