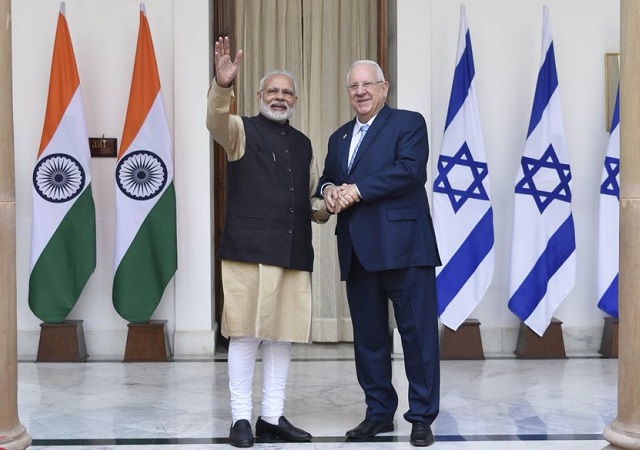 Israel’s President Reuven Rivlin received a ceremonial welcome at the presidential palace in New Delhi, earlier today. Prime Minister Narandra Modi and senior members of his cabinet where present at the occasion as the visiting Israeli Head of State was given a Guard of Honour by the three services of Indian military. Hundreds of Israeli and Indian flags could be seen waving side-by-side along the route taken by the presidential motorcade in New Delhi.

The grand ceremony accompanied by a thundering 21-gun salute is a fry cry from the dead-of-the-night  incognito “stop over” by the then Israeli Foreign Minister Moshe Dayan on a tarmac in Delhi, 40 years ago. Israel-India bilateral contacts in those days sounded more like Cold War spy thrillers than everyday diplomacy. Diplomatic relations between the two countries have indeed come a long way.

After the ceremony, President Rivlin and Prime Minister Modi presided over the signing of several key agreements and gave a joint statement to the press afterwards [scroll down for the video].President Rivlin is scheduled to meet President Pranab Mukherjee later in the day.

For Israel it was in fact our lack of natural resources that spawned our innovation and technology sector ­ giving birth to solutions and ideas addressing everything from technologies and techniques to turn the swamps into cities and cause the deserts to bloom, to communications, cybersecurity, and treatments for diseases. These are just some of the technologies on which Israelis and Indians are cooperating today. Indeed, on my visit I will be accompanied by a delegation of business, industry and defence leaders looking to explore how we can expand cooperation in these fields and more.

Similarly, in relation to the second key element ­our focus on academia and education ­I will also be accompanied by a delegation of presidents and representatives of the top Israeli academic institutions. Our universities and colleges are the building blocks of the start-up ecosystem, and the meeting point between research and innovation and the business sectors. I am delighted to say that Israel is opening the doors of its academic institutions to promote joint research with our Indian counterparts.

Already more than 10 percent of foreign exchange students in Israel are from India, and the cooperation does not begin and end in the classroom. Students are returning to India and continuing to build these relationships, and going on to share their skills and understanding to help advance the Indian economy.

Ariel University is one such Israeli academic institution that is taking up this opportunity to connect with Indian centres of higher education and research. Professor Yehuda Danon, President of Ariel University, is accompanying the presidential delegation. “India and Israel have many similarities and common interests and it is our hope that this trip will further our relationship while creating new and exciting joint research ventures,” Danny Hardon, Director of Research and Development at Ariel University, told Legal Insurrection.

Samaria-based university is already home to many doctoral researchers from India. During my visit to Israel sponsored by StandWithUs, earlier this year, I met some of these Indian researchers and learned about the cutting-edge research they were doing in collaboration with their Israeli counterparts.

Strengthening cooperation in the field of agriculture is also high on President Rivlin’s agenda. He will be inaugurating the agriculture fair Agro Tech 2016 in the northern Indian city of Chandigarh and visit a nearby agriculture technology centre run by Israel’s international development agency MASHAV. Jewish State is working to set up 26 such centres across India by the end of next year — out of which 15 are already operational.

Indian press and social media reacted positively to the historic visit by the Israeli head of state. A flurry of high-profile visits have taken place between the two countries since Prime Minister Modi took office two and a half year ago, including one by Indian President Mukherjee to Jerusalem — first ever by an Indian Head of State. Commentators and political observers are keenly waiting for Prime Minister Modi’s visit to Israel, expected to take place next year when both countries mark 25 years of the establishment of full bilateral relations.

Caroline Glick, always a useful read, (and thought by some to reflect Bibi’s thinking) has been pushing for a stepping up connections between Israel and what used to be called the Third World.

Decayed Western elites provide an amplification factor to the single-digit Muslim minorities in residents. And oddly, elite hatred of Israel reflect works perfectly well in politics–as whites across the EU and US move out of elite columns, the latter will look to replace them anyway they can–note BHO’s and HRC’s pitches to Muslims, bolstered by under-reported official connections to the Muslim Brotherhood, CAIR and Hezbollah.

And the US is allied with Pakistan because….Oh yeah, because we need them to help control a country that the Russians couldn’t deal with in spite of the fact they didn’t have a bunch of lawyers dictating ROE.