How dare we concentrate on the economy instead of Hillary’s chromosomes!! 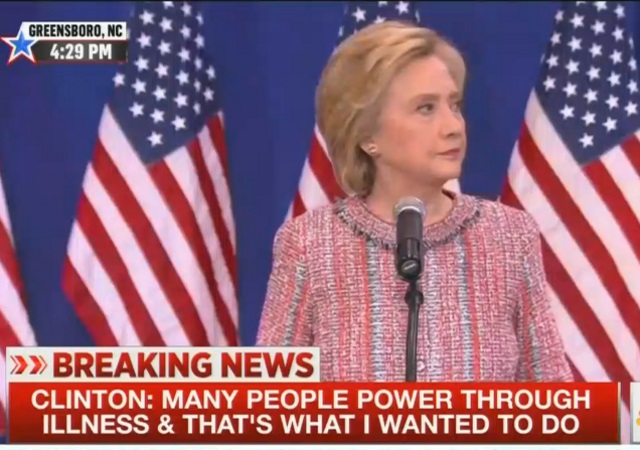 No, they’re not sex traitors. Yet, I cannot get over why people are so shocked that Hillary couldn’t bring in the female votes. Like, holy cow, you mean that the sex of a candidate is NOT the most important factor?! Yup:

What mattered most to voters, exit surveys indicated, was the economy, and, to borrow Trump’s words, “draining the swamp” in Washington. Four in 10 voters attested that they were in search of change, and three in five said the country was seriously on the wrong track. About the same proportion of people felt the economy wasn’t working for them, and two-thirds indicated that their financial situation was either the same or worse than it was when President Obama started his second term four years go.

WHOA! We females actually looked PAST the chromosomal makeup of the candidates and concentrate on the issues. How horrible of us!

(For the record, I voted for Gary Johnson. But I was always #NeverHillary.)

The majority of us did not find electing the first female president an important factor. It’s not because we’re racist or sexist. We want the ability to  pursue happiness:

Yet in interviews, some women said that electing the first female president wasn’t a reason to back the Mrs. Clinton. They cited misgivings about her use of a private email server while secretary of state, the fact they didn’t trust her or that they disagreed with her policies to expand government aid, such as her plan for free tuition for certain colleges.

“There isn’t a great deal of evidence that either her positions on issues or her candidacy as a woman [moved] the numbers very much,” said Karlyn Bowman, senior fellow at the conservative American Enterprise Institute in Washington.

This has not stopped Democrats from throwing around SEXISM. Democratic pollster Anna Greenberg said that there are some “who are skeptical about women’s political leadership” and America is still a “sexist country.”

NO. FOR THE LOVE OF GOD NO. The Democrats gave us Hillary, an awful candidate who wanted to expand big government. Just because someone doesn’t vote for you it doesn’t mean they did it because you have XX chromosomes. Get over yourself. You suck. You chose the wrong candidate to nominate.

Oh, it’s not just that, though. The media and Hillary campaign tried to dog down Trump with audio of disgusting remarks about assaulting females.

But a lot of us remember who Hillary is still married to. Her husband Bill has a line of females who have accused him of rape and sexual assault. Hillary tried to ruin these females, too. We also remember that Hillary went beyond defending her client to destroy the 12-year-old girl he raped.

No, Hillary. You are the WRONG female to lecture anyone on how to treat females.

Sarah Skwire wrote this amazing article at FEE.org back in February, but I only saw it right before the election. She reminded females we “are not obliged to vote for Hillary.”

Skwire starts her article with Madeline Albright’s famous line: “There’s a special place in hell for women who don’t help each other.” While yes, it’s true, Skwire points out why Albright should choose her words carefully (emphasis added):

But Albright should have been a lot more careful before she applied her signature line to what she sees as an obligation for women to vote for Hillary Clinton in the Democratic primaries. Because the minute that you take her line out of the context of relationships among people and move it to the political context, it loses whatever tough-minded charm it has, and it becomes a bullying, sexist, prescriptivist piece of obnoxious nonsense.

Yes it is sexist and Skwire lists the reasons why:

It is sexism of the oldest and most annoying type. With one comment, Albright managed to suggest the following:

1. Women should shut up and vote the way they are told to vote.
2. All women should vote the same way.
3. All women have the same interests and objectives.
4. Women who have made choices that others disagree with have chosen incorrectly and must be brought back into line.
5. Women cannot be trusted to recognize (and vote in favor of) their best interests.

Pushing females to vote for someone because she is female is insulting and degrading. Stop acting like we’re stupid and cannot think for ourselves. But it’s doing exactly what they accuse us doing: SEXIST. No, this is actual sexism, but unfortunately due to the left watering it down, no one sees it anymore.

You want to win us females over, Democrats? Stop concentrating on our sex. I say sex because breasts and a vagina doesn’t make you a female. Your chromosomes do. IT’S SCIENCE. But that’s another blog post.

Anyone with a brain can understand why some females didn’t vote for Hillary. We voted for Trump, Johnson, or Evan McMullin because we disagreed with Hillary’s policies.

*SIGH* LACKED. I didn’t say she failed completely in the female vote. Good Lord. Maybe if you would also click on the links I cite you would see where I got my evidence.

Mary Chastain: I didn’t say she failed completely in the female vote.

Clinton won the female vote, as well as the popular vote.

She did not, however, win the white female vote (specifically, since you are so nit-picky, she lost by a huge margin those white women who do not have college degrees).

Give it a rest, Zachriel. Your tiresome nitpicking is tiresomely tiresome.

Fuzzy Slippers: She did not, however, win the white female vote

Yes, I know. Mary knows. We all know.

The point is that these were the very women that Hillary expected to win with her glass ceiling refrain and her statements about being the first female president. I live in Florida, and we saw the same ad run over and over about Hillary wanting to make history (again) with our “help.” She further thought, or her team thought, that they would get the white female vote by highlighting Trump’s comments about women. They were wrong on both points, as Mary points out.

She said, “I cannot get over why people are so shocked that Hillary couldn’t bring in the female votes.”

I guess they will have to enlarge – that Special Place in Hell that Albright cursed them to.

I couldn’t find a reliable source for that. Please give me a link.

Click on the links I cite. I didn’t make this up out of thin air.

My understanding is that women are more fiscally aware.

So it is understandable that woman won’t vote for someone who pays $10000 for clothing that makes you look like a Hoover.

Voting for Hillary just because she’s a woman is like drinking anti-freeze just because it looks like Gatorade.

(not mine – stolen from comment section of American Thinker)

Ever try to get a #2 pencil in a vigana and then write with it?

LOL! Or use chop sticks.

Madeline provided more ammunition for those who think women do their thinking between their legs, not their ears

This whole post is racist, xenophobic, anti Islamic hate mongering. You need to be taken to reeducation camp immediately.

Pretty sure that what every democrat would write if they read it. Geez, I can’t understand why people didn’t vote for such a pure and angelic person like hilldawg…..

Because a goodly number of them were hanging around restrooms watching little girls go pee-pee.

Unless he does something brilliant (yeah, right) in the next few weeks, he’ll go down in history as the Potty Pervert President.

If my dog can read and I’m pretty sure he can, he’s going to be pissed about that dawg thing. I suggest you rethink that before he finishes his nap. LOL!

In spite of winning the popular vote Hilary isn’t contesting the election. Therefore why should anyone cares about how many women voted for her.
Unfortunately with Chelsea being groomed for Rep Lowey seat, expect Chelsea for president 2024.

Everybody is freaking out that Trump is going to execute gays, take away women’s rights and legalize slavery. He isn’t Muslim, okay people.

I’ve heard it’s the diaper rash that is making them throw stuff at the police and burn building. Send some Boudreaux’s Butt Paste to them.