“Hate Spaces: The Politics of Intolerance on Campus” (Trailer)

“Hate Spaces: The Politics of Intolerance on Campus” (Trailer)

Movie about the rise of antisemitism on campus, the BDS movement, and Students for Justice in Palestine 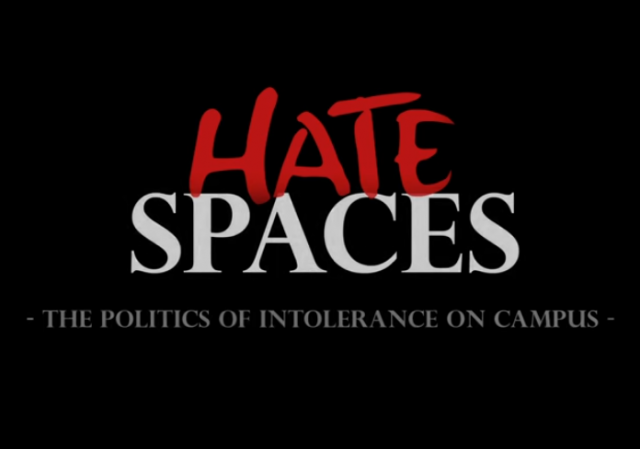 Americans for Peace and Tolerance is releasing a 70-minute documentary on the rise of antisemitism and anti-Israel activity on campuses and the role played by the BDS movement and Students for Justice in Palestine.

The movie is titled Hate Spaces: The Politics of Intolerance on Campus.

I was interviewed for the documentary, along with others such as Alan Dershowitz of Harvard, Richard Landes of Boston University, Bret Stephens of The Wall Street Journal and Caroline Glick of The Jerusalem Post.

Here is one early review of the film:

I’ve written about the phenomenon more than once, so I didn’t expect to be surprised by anything in the film. But despite knowing about the various incidents described, the sheer volume and intensity of them taken together left me shaken. Yes, shaken, and I’m not easy to shake….

The film makes it clear that the antisemitic movement – that’s what it is – on campuses is well-financed, well-organized and very successful in gaining adherents. It is also becoming more extreme and more explicitly anti-Jewish as time goes by and the “Overton Window” shifts in the direction that favors anti-Jewish expression. What was beyond the pale yesterday becomes the conventional wisdom today….

“Hate Spaces” will premiere in New York on November 30, and will be shown in numerous venues after that. Watching it won’t be a pleasant experience, but definitely an educational one. “Know your enemy” is still good advice.

Here is the trailer.

Don’t blink, or you’ll miss me (I get much more face time in the full documentary).

I wouldn’t have my faith, my education, my morals, or my ethics had it not been for the Jewish race.

I might be a backward peat bog cutter in Ireland if not for the Jewish contibutions to western civilization.

How can I hate them or begrudge them the land the Lord God gave them thousands of years before Muhammed was a gleam in his father’s eyes.

Pray for the peace of Jerusalem!

“If I forget thee, O Jerusalem, let my right hand forget her cunning. If I do not remember thee (Jerusalem), let my tongue cleave to the roof of my mouth; if I prefer not Jerusalem above my chief joy”. (Psalm 137:5-6)

Appreciate your post, but have to correct this: Judaism is a religion, not a race. There are Jews of every ethnicity and color.

Quite simply, this is about tbe developing a leftist fascist army of young people willing to do violence at the behest of their handlers – a la the Hitler Young, the Red Guard, the Khmer Rouge, etc.

Had Hillary Clinton been elected, she would have continued the work being done by Obama/Jarrett/Soros in recruiting and directing these freaks against the rest of American society, and she would have continued directing political violence from the White House. Fortunately for us, dumbass Obama put his entire stock and legacy into this pathetic and warped incompetent old crow – and gave us Donald Trump. (Doh!)

But we’re in Round 2, being the universities and most other schools are completely run by leftists, many of them rabid fascists. This will only change when brave and rational elected officials federal government begins taking back our schools from the lunatics running them.

Don’t look for the GOPe to help (they’ll continue their attempts at sabotage) but do look to Donald Trump.

I had to share this. The message and truth are so important.

Thank you for working so hard, so tirelessly, for this evil, this cancer, to be exposed.

“I wouldn’t have my faith, my education, my morals, or my ethics had it not been for the Jewish race.”

Same. Other than my mother, who was christian, the 3 most influential women in my life have been Jewish. I even married one of them. I’m not a practicing anything, and am unsure about any God, but its a very weird coincidence that I can’t just write off.