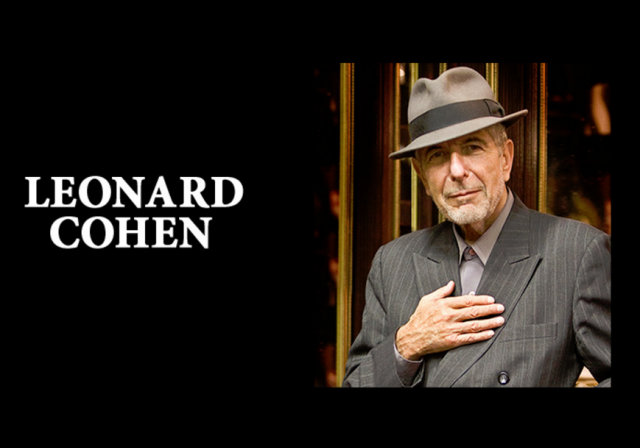 “It is with profound sorrow we report that legendary poet, songwriter and artist, Leonard Cohen has passed away,” the statement read. “We have lost one of music’s most revered and prolific visionaries.

A memorial will take place in Los Angeles at a later date. The family requests privacy during their time of grief.” A cause of death was not given.

Of course I knew about Cohen, though I wasn’t an aficionado. Many of his songs were made famous by others, like Suzanne:

(This link has many of Cohen’s most famous songs.)

There is one Cohen song that stands out for me. Hallelujah is simply a masterpiece in words and melody.

Well I’ve heard there was a secret chord
That David played and it pleased the Lord
But you don’t really care for music, do you?
Well it goes like this:

The fourth, the fifth, the minor fall and the major lift
The baffled king composing Hallelujah

But baby I’ve been here before
I’ve seen this room and I’ve walked this floor
You know, I used to live alone before I knew ya
And I’ve seen your flag on the marble arch
And love is not a victory march
It’s a cold and it’s a broken Hallelujah

It is such a brilliant song that it has been covered many times. Here are two of my favorite covers:

Less well known about Cohen is his strong connection to Israel. When Israel was invaded in 1973 he flew there to perform for the troops. In this image, to Cohen’s immediate right, is Ariel Sharon, taking a break from the fighting against the Egyptians in the Sinai desert:

On this day, we salute a dear friend of the IDF, #LeonardCohen. Yom Kippur War, Israel. 1973. pic.twitter.com/Iz3qNsRV6k

One of the best renditions of Hallelujah, quite appropriately, is from the Israel Defense Forces choir:

Great post, but did you have to link to Rolling Stone? Plenty of other media publications who were also honoring Leonard Cohen.

Leonard Cohen lives on through his music.

Rolling Stone is dead to me.

Oh. I don’t know how to accurately describe this, but you will get the gist of it.

Leonard Cohen, though a Jew and at least partially active in Judaism and in Israeli causes, was a practicing Buddhist. I seem to remember that he was an actual Buddhist monk.

He also wrote poetry and his books were widely praised.

Ellen Pao, the notorious SJW, sued the VC firm Kleiner-Perkins for sexual harassment. Part of her evidence was a book of his one partner had given her for Christmas.

Thanks for sharing this, Professor.
I read about Cohen’s passing on WaPo this morning.
https://www.washingtonpost.com/news/morning-mix/wp/2016/11/11/leonard-cohens-hallelujah-pops-most-sacred-text-almost-went-unheard-by-the-masses/
I am not that familiar with his life and work, except for Hallelujah, and that was just a passing one at that.
Yes, both the music and the juxtaposition of words are powerful.
But I was surprised to read that he struggled between two endings; the light and the dark.
The light:
Even though it all went wrong
I’ll stand before the Lord of Song
With nothing on my tongue but
Hallelujah
The dark:
Maybe there’s a God above
But all I’ve ever learned from love
Was how to shoot somebody who outdrew ya
And it’s not a cry that you hear at night
It’s not somebody who’s seen the light
It’s a cold and it’s a broken Hallelujah
Cohen then explained his thoughts about the song, saying “I wanted to indicate that Hallelujah can come out of things that have nothing to do with religion.”

Now I have no problem with Hallelujah used in a profane and not a sacred context.
I think we can experience a sense of ineffableness in life, and not just the sacred.
And I may have read that statement too strongly in my understanding of the song.

So it is interesting to me to read from you about Cohen’s strong connection with Israel and reread the words.

And thanks for that note about his background, RodFC.

Title of this post is inappropriate, at least for those of us who do not know of Leonard Cohen — and I am sure I am not the only one who is not familiar with his work. It seems as if you are praising his passing.

Um, I think you’re responsible for your own misapprehension. It’s simply the title to one of his more popular songs, not a cheer for his passing.

That song has been covered by some amazing people. And the way some modify the lyrics can be special.

If you’d like to hear an especially Christian version of it, given we soon approaching the Christmas season, give this a listen.

That is disgusting.
Almost as bad as that couple on lawrence Welk singing One Toke Over the Line

Leonard Cohen is “So Long Marianne.”

It’s hell to pay when the fiddler stops…

Phenomenal talent. He really was a Tower of Song.

My fave version so far:

Small commercial at the end which is NBD. Enjoy – the harmonies are just killer.

Leonard Cohen was essentially a poet and his work is best appreciated by those with a wide range of life experience. Initially, his work was most attractive to the intellectual and artistic set; academia and the coffeehouse set. It was dark, melancholy and sensual [in some cases sexually graphic]. It strikes a much stronger chord with older audiences who have experienced love, loss, hope and disappointment and survived.

A great poetic talent, who mated music and poetry. He will be missed. But, as with many of the modern masters of art, he will most likely be “discovered” after his passing.

And this seems appropriate here, not to mention beautiful:

I was introduced to Leonard Cohen around 1970. I played his “Songs of Leonard Cohen” until it would play no more.

For me, he will always be defined by his song Suzanne.

That is a beautiful praise song. Thank you Leonard Cohen for sharing your talent with the world. Rest in peace. Prayers of comfort for his family and friends.

Wow I’d forgotten how fantastic that Buckley rendition is. RIP Mr. Cohen, you left the world a better place than you found it.