Has Obama called the victim yet? 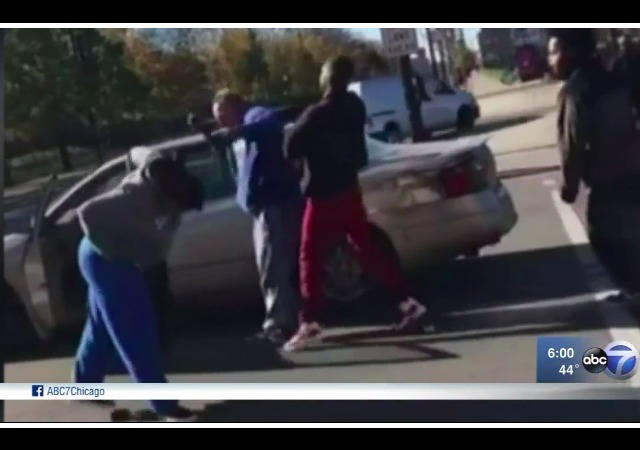 Chicago authorities have charged four people for beating David Wilcox and hijacking his car after a car accident. People around him just watched and did nothing to help him. Instead they screamed anti-Trump sentiments:

On a video posted online, Wilcox, 50, was pummeled by several individuals, while onlookers shouted “You Voted Trump!”

The altercation started when his car was rear-ended at Kedzie and Roosevelt in the North Lawndale neighborhood on Wednesday.

As soon as he got out the car, a person at a nearby bus stop yelled, according to Wilcox, “That’s one of those b–ch a– Trump supporters!”

Wilcox said he turned and said, “So what if I’m a Trump supporter? That doesn’t have nothing to do with this.’ ”

Wilcox said he got out to ask for insurance information and that’s when the female driver of the other car started throwing punches. Soon, three men in the back of the car began throwing punches and kicking him, as well.

“The lady actually threw the first shot,” he said. “Then they were all hitting me.”

Wilcox believes robbery motivated the attack, not politics. Someone did drive away with his car after the attack while Wilcox tried to hold onto it.

CBS reported that community activist spoke out against the attack:

“I am asking the public to turn these individuals in,” said Holmes. “This should have never happened.

The police arrested those responsible:

Julian Christian, 26; Dejuan Collins, 20; Rajane Lewis, 21; and a 17-year-old girl not named by police because she is a juvenile were arrested and charged with one felony count each of vehicular carjacking.

No charges for the hate crime?

Of course not, the perps are black.

Exiliado: No charges for the hate crime?

What makes you think it was a hate crime under Illinois law?

In other words, you have no idea what constitutes a hate crime in Illinois.

“People around him just watched and did nothing to help him. Instead they screamed anti-Trump sentiments”
John Derbyshire was right?

“The Talk” for Non-Black Kids:

A nuclear-bomb of political incorrectness.

Definitely a hate crime…but you got to be white for that in Obama’s world.

gonzotx: you got to be white for that in Obama’s world.

That is not correct. The FBI reports that about 20% of racially motivated hate-crimes were due to anti-white bias.

Hate crimes are nearly always prosecuted on the local level along with the underlying crime.

An armed society is a polite society. Chicago must be what hell is like.

Yeah, except the running hell never danced on his toes and probably has more self respect.

I’m glad I live in a place where scum like those four stand a really good chance of getting shot down in their tracks.

“motivated by robbery”. Somebody has been properly coached. Not that I blame the establishment. How can they keep stoking racial resentment and divide if we notice when their hatred bears fruit? At this point that appears to be their go-to strategy.

This is part of the inevitable outcome of a written policy of the DNC, as well as of Bill and Hillary Clinton. This party and these people broke the social compact, by deliberately choosing to make it acceptable to harm fellow Americans for political reasons.

In my opinion, there is no greater civic sin in America than fommenting violence against voters for the purpose of blaming the other side.

The Democrats have received their exile to the wasteland. They can come back, if and when they have cleaned house.

Or, the disillusioned former Democrats can form an entirely different party.

To me, a minority perp’s kick to the victim’s head while the victim is unable to defend himself demands the harshest punishment.

Send him back in the hood without his firing pin. Mum of course.

In the NFL, a kick to the head gets you a personal foul penalized with a 15 yd penalty, automatic first down, and probable game ejection. I’ll bet these animals get less.

See, this is how I know the “alt right” is not a threat.

Because if they were, teams would be sent to each of these perp’s homes while they sat in jail, and the people who raised these monsters would be slaughtered. Just to send a message.

But that will not happen. Because the right wing is not the evil bogeyman they make us out to be.

Hitler salutes and white supremacism: a weekend with the ‘alt-right’
https://www.theguardian.com/world/2016/nov/21/alt-right-conference-richard-spencer-white-nationalists

Rorbert Spencer, called by Trump Chief Strategist Steve Bannon, the intellectual core of the alt-right, railed against Jews, quoted Nazi propaganda in the original German, and said America belonged to the “children of the sun”, a race of conquerors and creators.

Meanwhile, we are being civil, taking the high road, begging President Obama to take the podium and tell his fellow Democrats to stop the violence.

What happens if he refuses? Nothing?

This week it is nothing. In a few months it will become a hate crime as it should.