E.U. to collapse ‘in a few years,’ says Nigel Farage

E.U. to collapse ‘in a few years,’ says Nigel Farage

Holland, France and Germany head for decisive elections next year 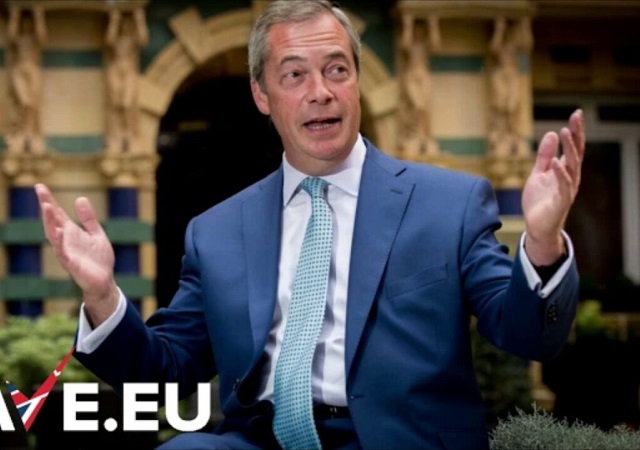 The end is nigh for the European Union, predicts the chief architect of Brexit, Nigel Farage. Talking to an Italian TV station, the leader of the UK Independence Party (UKIP) said, “In a few years time the European Union won’t exist.” Farage was asked about President-elect Donald Trump’s views on the E.U., Farage replied, “It doesn’t really matter,” as the E.U. won’t be around for long.

Farage is the only European politician to have meet Trump since his election victory.

The 52 year old British politician has been a lone voice calling for his country to opt-out of the Brussels Bureaucracy for most parts of the last 20 years. Once scorned and ridiculed by conservative and liberal elites alike, Farage has become a hero for various nationalist movements gaining strengthen within the E.U. member states.

Speaking to Italian TV station Agenzia Televisiva Nazionale, the 52-year-old said: “The President-elect has a great deal of respect for Brexit Britain.

“I am not sure what he thinks about the European Union but it doesn’t really matter.

There are good reasons why Nigel Farage could be spot on in his predictions about the European Union.

The European currency crisis and uncontrolled immigration might have been overshadowed in the media by the coverage of the U.S. elections, but Brussels has done nothing to remedy those fatal flaws. European taxpayers have pumped in around €250 billion into the Greek economy — with no end in sight. Mass-migration from Arab and Muslim countries also continues unabated.

The first blow to the E.U. could come from the Netherlands — a founding member of the union — as Dutch voters go to the polls in March. The threat is not only from Geert Wilders’ Freedom Party, but also from a larger alliance of Dutch politicians from across the political spectrum who are opposed to mass-immigration or want greater national sovereignty. This alliance has managed to pass a new referendum law and using use it to block further economic and political unification within the union. As Wall Street Journal noted in its report on Sunday, “The E.U.’s new bomb is ticking in the Netherlands.”

In April 2017, France heads for the first round of presidential election, where the nationalist Marine Le Pen is tipped off to win the initial contest. If Le Pen were to win the French presidency, the European project would be dead for all practical purposes. The E.U. is basically a Franco-German project. If the French starting marching off-beat, the European Superstate will come crumbling down — before you can say FREXIT.

E.U.’s biggest backer, German Chancellor Angela Merkel is facing a stiff challenge at home, as Germans make up their minds ahead of the general elections in the fall of 2017. Merkel is seeking a re-election for a fourth term after ruling the country for eleven years.

Yes, the EU is doomed. The only question is, will it quietly disintegrate or will it dissolve into civil war?

It took us a while to settle on the terms of our Union, not to mention the bloodiest war in our history. And now, we have sore losers demanding the rules for a national election be changed after the fact, so they can get the result some of them never event voted for. The EU is very new, in the grand scheme of things, and may yet be reformed into something workable.

I don’t know whether the EU is dead, or just needs some revision. Certainly there should be some mechanism to promote co-operation among the neighboring countries. However, it would be most unwise for this to come at the cost of a loss of national sovereignty and culture, not to mention the imposition of an unelected government which has recently demanded both money and a standing army (!).

Another problem is that there are far too many people seeking to use the EU as a source of money, both as income as through government contracts. I do not think this was what was originally sold to the voters.

” I do not think this was what was originally sold to the voters.”

This applies to all collectivist/leftist schemes where truth is anathema, especially in the selling phase.

They can always go back to the original Common Market, that didn’t aspire to be anything more than that. The UK would probably like to be part of something like that.

Do the constituent voters of the eu even really get any say in it?

In light of how just about every smart and savy political analyst got the forces in play during this last American election wrong, I’m a cynic about mainstream reports from Europe.

Anyone have a better explanation? It just does not make sense. She’s not an idiot. This was deliberate. I think its intended to undermine the nationalistic identities of Euro nations, to pit ethnics groups against each other so they will endow the State with the power of “community organizer”

Anyone have a better explanation? It just does not make sense.

Oh yes, it’s deliberate policy. But the policy is not a planned destruction of Europe, it’s not a lemming-esque urge to self-immolation, it’s not the Illuminati and the Novus Ordo Seclorum, and it’s probably not just the usual pedestrian dream of all government to increase its own size and power; it’s an ineffective attempt to deal with the so-called “demographic time bomb”. The bomb is a disease of modern liberal societies, and the cause of the problem is so ingrained and inherent that they can’t even recognize it, let alone plan out how to solve it effectively.

As near as I can determine at this late date, it gestated long ago but didn’t become official policy of any government until World War II, when England decided The War had to “mean something”. They tried that in the Great War as well; minor squabbles among the European royal houses and structural instabilities in the Habsburg Empire were allowed to deteriorate into the greatest disaster of Western civilization, and they had to pretend that it was all something, somehow, worthwhile. Hence, the lofty and terminally silly concept of a “War to End Wars”. And we know how well they bungled that a mere twenty years later. The WWII error was the deliberate adoption of the socialist way of life, of government, of thinking. I won’t say it’s impossible to get out of that hole, but history offers depressingly few inspiring examples.

The US, obviously, is not immune. When I’ve opined before that the beginning of the end for the US was the Nineteenth Amendment, I wasn’t just being a smartass.

The phrase “demographics is destiny” isn’t a mere slick bit of alliteration. It’s the key to the future (at least this time around).

It won’t work until they get the “under God” thing.

Well, if they let in a few more muslims, it will be the “allah akbar” thing and sharia “law”. That might cause a few bible thumpers to move there if they can keep women barefoot and pregnant and in the kitchen.

They don’t have “a few years”.

The time to kill this monster was about a year ago, when the terminal mismanagement of the EU’s finances became too severe to ignore. For economic reasons alone—and, even worse, very well-understood reasons—the EuroZone not only doesn’t work, it can’t work.

But the problem didn’t become urgent until the horrible abuse of the “refugee” problem.

Le Pen could salvage the situation, maybe, if she’s quick … but her election is a long shot.

So sorry, guys, when you get to Valhalla, don’t expect Charles Martel, Nicholas Graf Salm or John Sobieski to put you on their Christmas lists. You surrender-monkeys let them down.

I don’t think Odin will allow them into Valhalla. Only warriors go there.