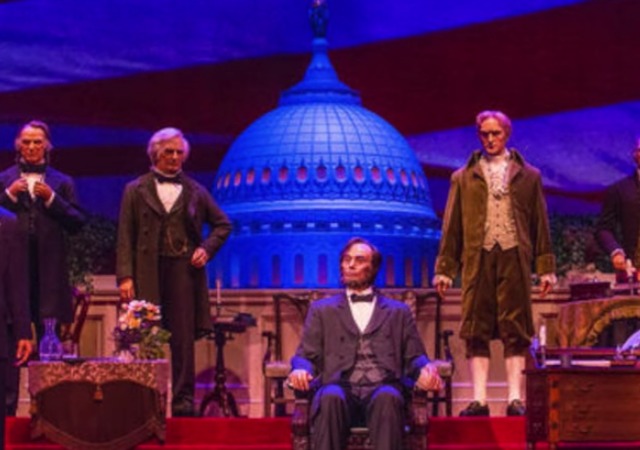 Disney World will add President-elect Donald Trump to its “Hall of Presidents” attraction at Magic Kingdom:

And with the announcement of a new POTUS, Disney fans know what that has meant historically: a new animatronic added to the iconic Hall of Presidents at Disney’s Magic Kingdom Park. The attraction was originally opened on October 1, 1971 in Liberty Square and remains a staple of the park’s legacy to this day, welcoming in the nation’s new President of the United States every election cycle.

The Hall of Presidents is scheduled to be closed from January 17th, 2017 through June 30, 2017, presumably to add President Trump to the ensemble in a prominent capacity and rework the show accordingly. There is no official word on how he will be added to the production, so make sure to stick with Inside the Magic, and we’ll make sure to keep you updated with all new information as it comes about.

Closed for almost six months to add a mannequin?

Maybe they anticipate trouble getting the hair right.

Actually, that’s not an unreasonable amount of time, given the massive change to the attraction that has to take place.

Effectively ALL of the presidents except for Lincoln and Washington need to be rearranged (which requires a massive undertaking in and of itself). The testing alone to confirm that happened correctly is a nightmare given the archaic control system for the animatronics.

They will likely add additional movie footage to the screen movie.

All in all, this is a larger production than you might imagine. I will be interested to see it, but I likely won’t have the opportunity until January or March of 2018 (if that).