“Basically extinct” in the South. 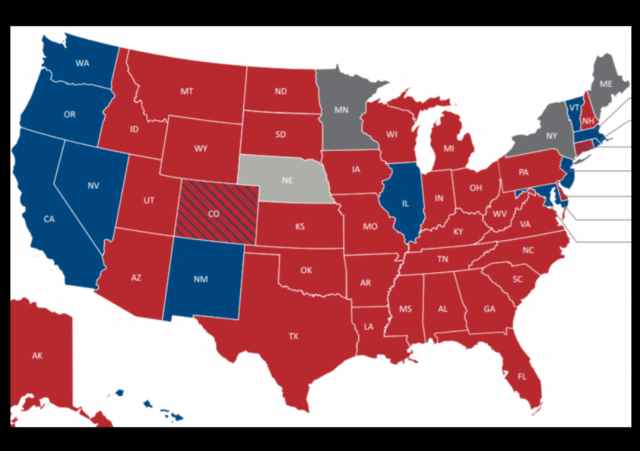 We all know how devastating the loss of the presidency is to Democrats, particularly when combined with Republicans holding the Senate and House.

But, it was equally bad, if not worse, for Democrats at the state level.

In the past 8 years Republicans have made devastating gains at the state level, taking over numerous state houses and other statewide offices, and state legislatures. It’s been the equivalent of washing the sand out from under the Democratic political house, depriving Democrats of a training ground in which to grow future leadership.

It not only impacts a myriad of social and economic policies, but also various states-rights issues and redistricting.

Republicans expanded their ranks of governors, winning Democratic-held seats in Vermont, New Hampshire and Missouri. The party also made gains in state executive offices and in legislatures across the country.
By Wednesday morning, Republicans had won control of the Iowa state Senate, the Kentucky House and the Minnesota state Senate.

Democrats gained enough seats to pick up control of both chambers in Nevada’s state legislature, as well as the New Mexico state House. North Carolina Attorney General Roy Cooper (D) leads Gov. Pat McCrory (R) by just 5,000 votes out of more than 2.5 million cast; the Associated Press has not called that race.

The results mean Republicans appear likely to have added to their already considerable power in the states, riding a wave of populism headed by President-elect Donald Trump….

If current results hold, Republicans will control 69 of 99 legislative chambers across the country. Democrats will control only 30, the same breakdown as before voters went to the polls.

In two of the three states where Republicans won new majorities — Kentucky and Iowa — GOP victories mean the party will control both chambers of the legislature and the governor’s mansion. In Minnesota, Gov. Mark Dayton (D) now faces a Republican legislature for the final two years of his term. 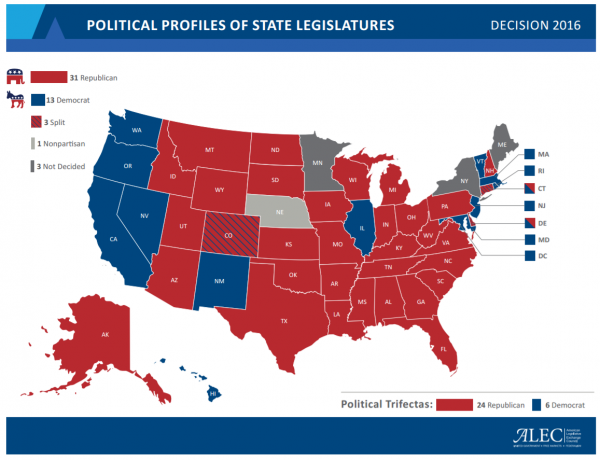 In much of the country, particularly the South, Democrats are “basically extinct” at the state level.

When your priority is making sure dirty old men can to into the restroom and watch your little girl go pee-pee, you are bound to encounter a negative reaction.

On Target with that one!

There’s an old wise saying about counting your blessings…

Given that every other NC race went GOP, and that Cooper, out of the blue and against all other races, may have beaten McCrory strikes me as a little suspicious. McCrory’s performance has been pretty damn good, made easier with a fully GOP state congress, but the SJWs and a multitude of other activists from out of state have been all over McCrory for signing HB2. I’d be looking for voter fraud in that one. It doesn’t make sense.

I hear the McCrory campaign may challenge the Durham results.

The Tell-Tale Hearts beat every louder. Loss of their patron Party is a major setback for the Pro-Choice Church, selective and opportunistic, unprincipled and vindictive. Baby steps.

That said, lets direct our attention to Revitalization, Rehabilitation, and Reconciliation.

I believe the voters told Obama where to put his phone and pen.

Uhhm. Sorry to interupt. Next question: Who will Trump appoint to SCOTUS and when?

My bet is Dianne Sykes and he will announce next week that he will put her name forward at the soonest opportunity.

It is important to make sure the courts don’t undo what the local Republicans do.

Better queue up three more names, because with any luck at all he’ll also be replacing Ginsburg (age 83), Kennedy (age 80), and Breyer (age 78) too.

The Turtle had damn well better grow a sack and thank Hairy Reed for setting the recent precedent of approving judiciary nominations with a simple majority. Like a dog that shit on the rug, Hairy needs to have his nose rubbed in it.

Don’t be surprised if he nominates the second coming of RBG….after all, Trump is a liberal.

He’s far more liberal than I would have preferred, true.
But if you look into the names he has already put forward as the type of justice he’s looking to promote, the names look pretty good.

If he can stick to picking constructionist/origionalist justices, I think he could flop just about everywhere else, and still have a secure “legacy”.

Presidential policies are only good while he retains office, the next Pres can change it all (as Trump has proposed with erasing O’s EO’s), but the Supreme Court picks will be in place for decades to come.

One of the favorites here at Legal Insurrection is Don Willett. I understand the Trump team loves him.

I was a little surprised that KY House flipped. I can only speak for my district here in northeast KY, but the (D) incumbent had more yard signs and was a former district court judge so he was well-known. I’d met him through his wife who I worked with on local charity and he seemed a very nice guy. Plus, he was definitely sending out more mailers then his (R) opponent.

It was first time for the Republican, a retired small business owner (pharmacist) and I didn’t think he had much chance. I voted for him, of course and damned if he didn’t win. 🙂 I was really surprised but definitely glad it happened.

Just goes to show that even a “nobody” can win, if people vote for him.

Indiana Republicans not only retained their super-majority in both Houses, they also took away the only Statewide office held by a Democrat, Superintendent of Education.

And we got to say Buh-Buh-Bye to Bayh, who the Dems shoved in at the last minute when they thought they could take the US Senate.

Only dots of blue in the state are Lake County in the northeast, Marion County (Indy) and Monroe county(Bloomington-IU)

The amendment prohibits local governments from passing laws banning hunting or fishing; and empowers only the Indiana General Assembly to change laws governing hunting and fishing. It also stipulates that hunting is the preferred method for controlling wildlife populations.

The Democrats are/were favored in national elections simply because the consequences of liberal social and fiscal schemes can be redistributed with reduced individual responsibility. They are favored in other places because they count the vote.

I just don’t have the lifespan to even read about what they think. I can’t burn that much of my time.

Dems don’t care about cultivating leadership ability, they count on the msm to fake it for them. Obama, anyone? Hillary?

See I told you all Trump would win. 😀
Trump will be an exceptional president
at long as the republican/democrat establishment sabotage him

and the Democrat losses are so bad, they’ve nearly gone extinct. Mwahahahahaha… the won’t win back congress or the senate any time soon…. should repeal obamacare if Republicans want to keep both… ….I don’t think it matters if it’s even replaced people want the costs/huge premiums gone.
…..and any ills that come from it can all be blamed on the dems/0bama for the next 8 yrs. hahaha

Liberals got a sound thrashing… and they are in such tears…. it’s great! hopefully most of them commit suicide or leave the country totally…

….and I can’t wait to see Trump roast obama at the first white house correspondence dinner… ….just like 0bama did to him…. ….Trump should spend the next 8 yrs humiliating the dems and obama frequently… so that they are so demoralized and suffer for years and years. …they deserve every bit of the misery that comes to them. 😀

The humiliating and derogitory treatment of conservatives contributed to the motivation that led to this electoral result.

A far better course would be to matter-of-factly repudiate their policies, replace them with those that work, and let them eat each other with infighting and recimination.

Which states, though? Trump put the proverbial nail in CA GOP coffin (albeit he did much worse than the propositions or even the local measures in the Bay Area). Entire South-West is going from purple to blue.

We’ll fix that once we clean out all the illegals who vote. And it’s quite a few.

But – looking at the County by County election map:

Can you hear us now?!