That one’s going to leave a mark 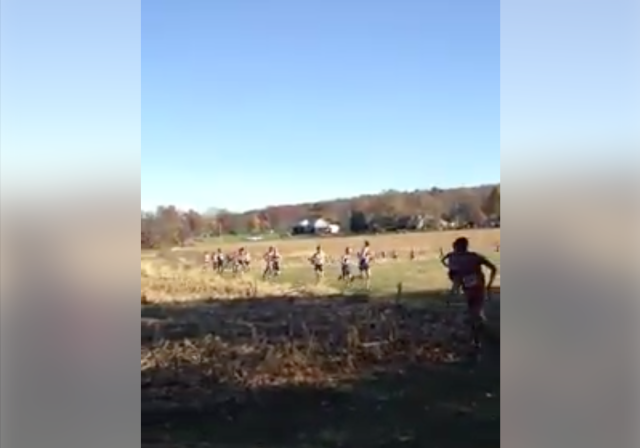 Someone forgot to tell the deer that XC isn’t a “contact sport”(turn on the sound) this weekend at the DIII Mid East Regional Championships at DeSales University in PA. Justin DeLuzio from Gwynedd-Mercy College got hit by a deer mid-race. He suffered no major injuries, interview coming soon.

The Gwynedd Mercy athletics website said DeLuzio was “very bruised” from the collision, but got up to finish the race. His teammate, Matt French, saw the crash and helped his teammate up, then accompanied him to the finish line.

“Justin is doing okay, he’s just a little sore and bruised up,” said head coach Kevin Clark. “We were worried about his health for awhile, but we’re proud to see him fight through this along with his teammates, to get up and finish his last collegiate cross country race.”

The deer are the ones laughing now and telling jokes about how now humans know what it feels like!

When I saw the headline I thought I was going to see a deer “boxing” the daylights out of the runner.

When cornered deer will rare up on their hind legs and “punch” the living s$*t out of whatever is threatening them with their hooves.

Nasty business… had a dog get beaten and cut up by one once. Taught him to be a little more cautious.

Probably wanted to cross the field and then the runners came along. They got spooked and did what most deer do and went into survivor mode.
Which is mostly run like the wind. Seen it many times. Watched a young doe go over 800 yards full speed when a young buck took an amorous interest in her that she wasn’t reciprocating.

Some really smart older deer have been known to just lie down and let the danger pass if they think they won’t be noticed. Even my cat has lain down when a car came along one night while we walking around the area. Usually he runs back to the house. Gave me a chuckle.

Deer aren’t known for their intelligence, they’re known mostly for how good they taste and not learning how to look both ways before crossing the roads.

…and eating your rose bushes. they’re thick around here, like squirrels